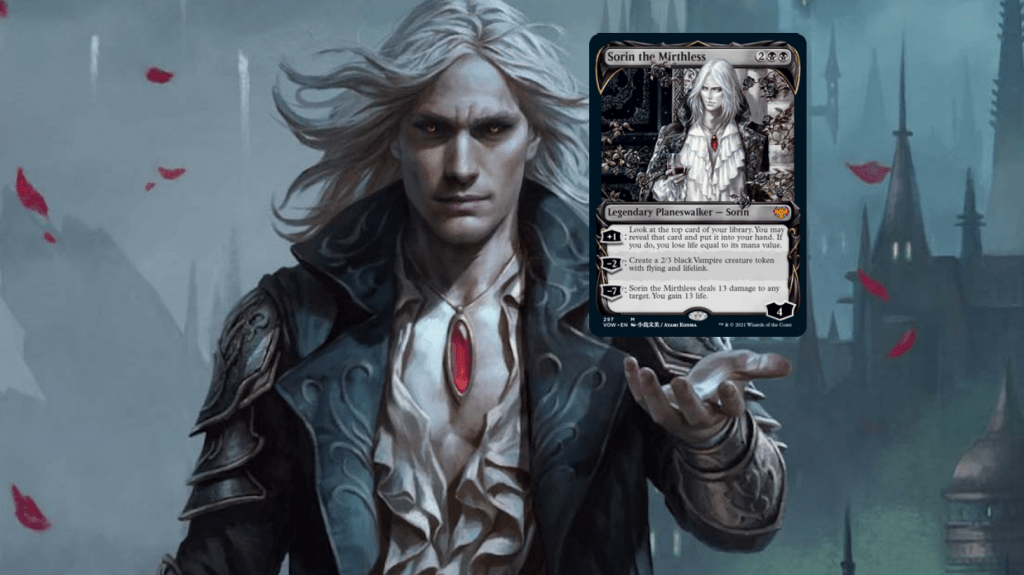 Magic: The Gathering is about to get very bloody as vampires take the stage in the new Crimson Vow set. Alongside new game mechanics like Blood Tokens, which can be sacrificed to summon new cards, Crimson Vow also has a very familiar connection for video game fans.

Between glimmering vampire brides and blood-soaked feasts, Magic: The Gathering players may stumble across a fresh new Sorin card showing off a unique look for the Planeswalker hero.

Draped in a luscious cloak frilly shirt, he actually looks a lot like Castlevania‘s Alucard in Crimson Vow, thanks to the always-excellent work of longtime Castlevania concept artist, Ayami Kojima.

As players collect new cards in the set, they may come across a special art card depicting Sorin in his full, fancy coated-glory — or find one of the new ‘Fang Frame’ cards featuring a gorgeous decorated border. Whether you play Magic: The Gathering or not, it’s hard to deny the new card is absolutely stunning.

While it does appear Kojima only contributed to Sorin’s look for the upcoming set, Castlevania fans will be delighted to know Crimson Vow‘s entire aesthetic is still heavily inspired by classic vampire fiction in the same way Castlevania is.

Dracula himself makes an appearance in the new set as a ‘Vampire Wizard’ with the ability to fly, create Blood Tokens or transform into a Voldaren Bloodcaster. While he’ll likely be a rare card, you’ll want him on your side when the big-scale battles take place.

In Crimson Vow, you’ll have the unique and unenviable task of crashing a vampire wedding. This event comes following the release of the werewolf-starring Midnight Hunt, and concludes the ‘Halloween’ chapter of the long-running card game franchise with a carnage-filled crossover where vampires and werewolves must work together.

There are 267 news cards to collect in total, including cards that’ll shake up traditional gameplay. Blood Tokens are new to the series and they’ll help you transform your vampire hoards, but the set’s fresh Training mechanic will also let you gain an advantage over powerful enemies in battle.

There’s also plenty of gothic new creatures to add to your army, or face off against on the battlefield.

Magic: The Gathering’s new Crimson Vow set goes live on MTG Arena from November 12, and will be available in stores on November 19.