A new Goat Simulator 3 advertisement has been pulled due to its use of leaked GTA 6 footage.
Leah J. Williams 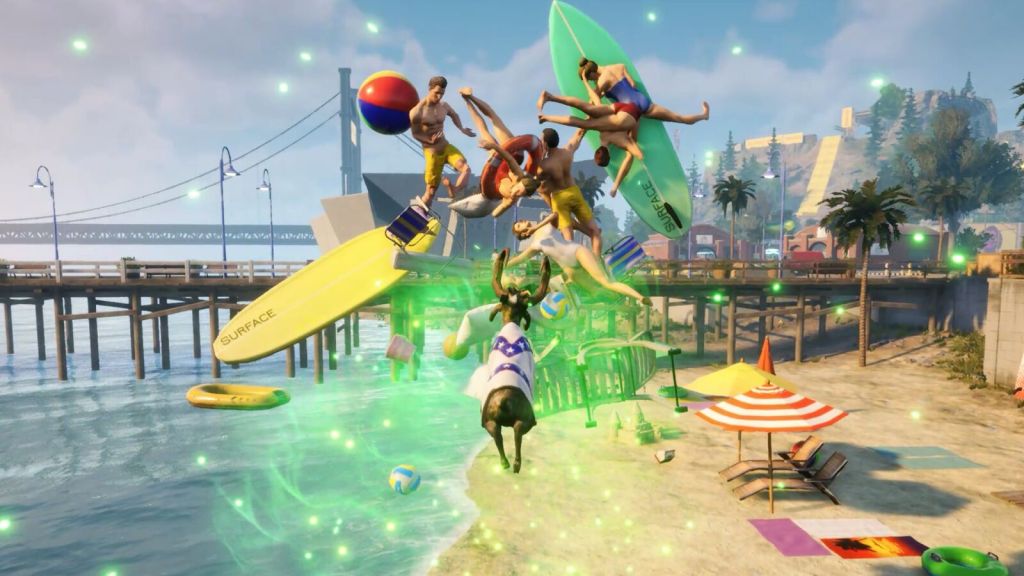 The latest trailer for Goat Simulator 3 has caused a minor kerfuffle online, with the official game Twitter account getting a DMCA takedown notice from publisher Take-Two over its brief use of footage from the infamous GTA 6 leak of 2022.

In the trailer, an NPC named Shaun is seen talking about his experiences as a ‘stunt guy’ in Goat Simulator 3 – taking laps around buildings, picking up objects, admiring art, T-posing, and ragdolling. In a small, blink-and-you’ll-miss-it segment, Shaun also points out he’s done work in other games this year – namely, GTA 6. This statement is accompanied by brief footage from the leaked build of the game which appeared online in September.

Shortly after posting this tongue-in-cheek trailer, it vanished from the Goat Simulator 3 social accounts. A notice read ‘this media has been disabled in response to a report by the copyright owner’. Subsequently, the Goat Sim Twitter account tweeted a meme of Simpsons character Ralph Wiggum chuckling and saying, ‘I’m in danger.’

At this stage, it’s unknown if further action will be pursued. The use of the footage was clearly intended as a joke, and may fall under United States parody law – but it should also be considered that the original leaked footage was illegally obtained. Snipping it and including it in an official game trailer is contentious at best.

Whatever the case, it’s clear Take-Two is still fairly sensitive about the use of the leaked footage in the public domain.

When footage of GTA 6 originally leaked, the company expressed major disappointment over its release, stating it never intended the public to see the game in its rough early form. Since it landed online, Take-Two has been vigorously pursuing uploads and re-uploads of the footage in the hopes of scrubbing it from public forums.

While the Goat Simulator 3 team tested the waters, it appears Take-Two isn’t quite ready to lampoon the unfortunate game leak just yet. Stay tuned for fallout from this trailer.