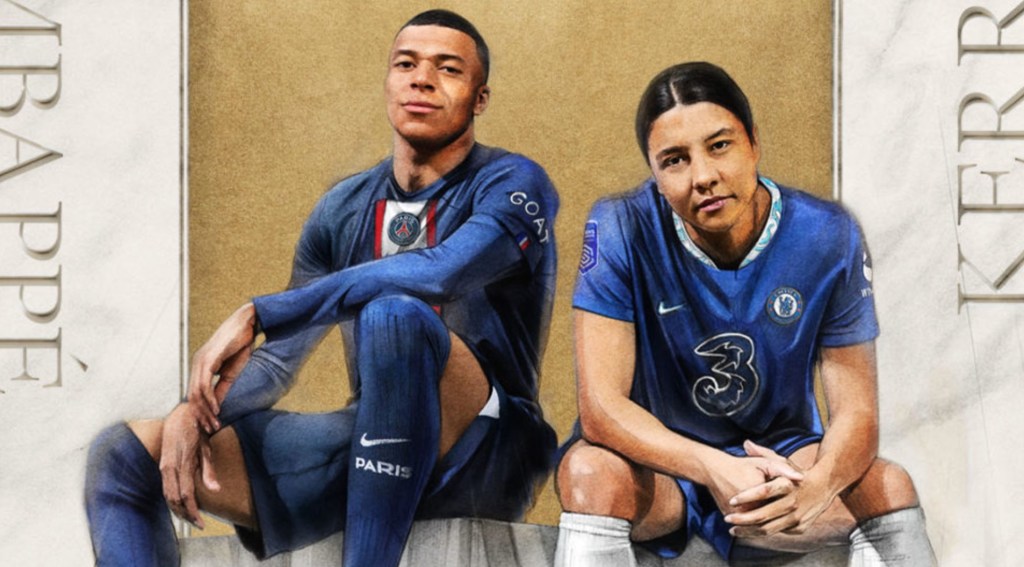 EA has officially announced the cover stars for the FIFA 23 Ultimate Edition: Australia’s Sam Kerr, and Paris Saint-Germain’s Kylian Mbappé, who returns for another year. While Kerr technically plays for English team Chelsea, we’re counting this as a win for Australian and women’s soccer.

Kerr has risen to prominence over the last few years, bringing attention to women’s soccer on a global stage. She’s been shortlisted for the Ballon D’Or sports award multiple years in a row, and has been part of Chelsea’s recent, impressive win streak in the Women’s Super League. While she’s not the first woman to grace the cover of a FIFA game – that honour goes to Steph Catley, Alex Morgan and Christine Sinclair on FIFA 16 – she is the first woman to be featured on an Ultimate Edition.

This version of the game typically spotlights the best players of the year, shining a spotlight on their careers and contributions.

You can check out the shiny Ultimate Edition cover, starring Kerr and Mbappé, below:

‘Two phenomenal forces up front. One ultimate strike partnership,’ EA’s announcement on Twitter reads. The company is set to unveil more about the game on 20 July, with a full reveal and details about everything new coming to the game.

According to Eurogamer, the EA team is planning for FIFA 23 to be the most ‘inclusive’ soccer game ever, with an equal experience for men’s and women’s teams.

‘This promises to be the most inclusive FIFA ever, with all-new experiences built to appeal to more players and football fans across the globe,’ line producer Matthew Lafreniere reportedly said in a media briefing. ‘On FIFA, we’re committed to building an equitable experience and aspiring to help grow women’s football.’

We’ll learn more about EA’s grand plans for the FIFA franchise, and what Sam Kerr’s starring role means for the game, on 20 July. Stay tuned for more.