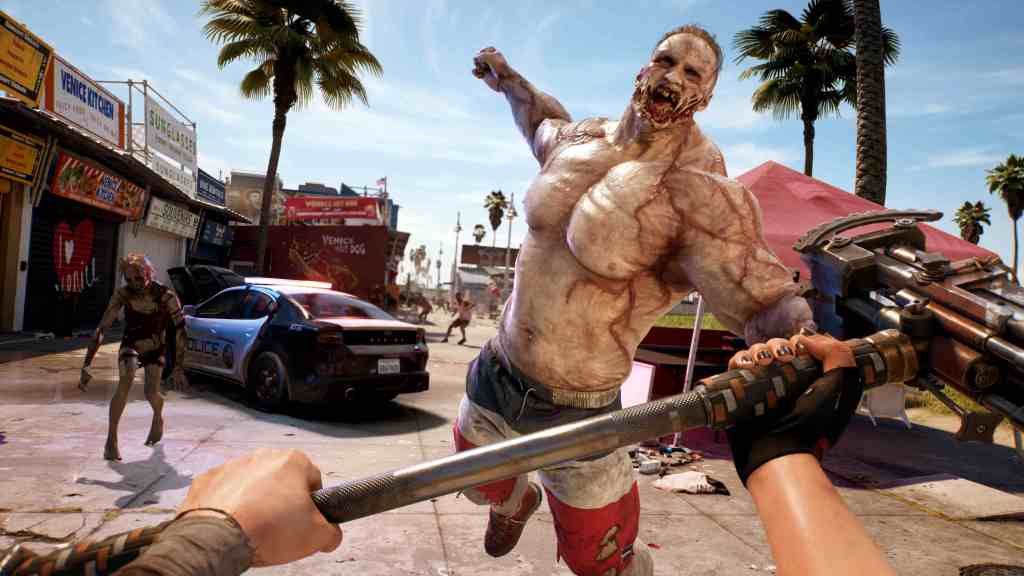 A brand new Dead Island 2 showcase has given a fleshy glimpse at the upcoming game, via a new live action trailer and deep dive into the zombified world of Los Angeles, known as ‘Hell-A’. Between sewer zombies, fire zombies, and disembodied heads, it looks like there’ll be plenty of opportunities to experiment with combat and flex your guns in this gory adventure.

It’s not just guns and bats you’ll have at your disposal, however – you’ll also be able to punch through zombie heads, smoosh zombies into the pavement, slice them with bear claws, burn them, electrify them, or shower them with lethal sludge. Of course, all of these actions are accompanied by explosions of blood, guts, and other fluids, so if you’re particularly squeamish, this might not be the game for you.

Also displayed in the showcase trailer was the game’s new zombie ability. As an infected person struggling to beat back the virus, you’ll be able to tap into special zombie powers, which grant you super strength, killer claws, and a rabid sense of survival. This mode appears to be temporary, and will aid you on your quest through Hell-A. We got a brief glimpse of this power in our Dead Island 2 preview.

You can check out the new showcase trailer, sandwiched between those live-action segments, below:

Note: This video is age-gated and only available to view through YouTube.

While you will need a strong stomach to survive, Dead Island 2 looks like a real blast based on this showcase. Between flaming swords, Wolverine-like claws, and environmental puzzles which aid attacks, there looks to be plenty of mayhem in store. If you’re looking to let loose and smash some heads in, this could be a worthy power fantasy to stomp through.

In our early demo preview of the game, we came away fairly impressed by all the action:

‘Melee combat felt satisfyingly hefty – thankfully, because that’s your primary interaction with this world. Swings and strikes land with sometimes stomach-turning impact, and the game also incorporates a gory dismemberment system, which focuses on allowing for locational damage … relying on your interesting melee weapons and their intricacies is where the moment-to-moment satisfaction of Dead Island 2 lies,’ wrote Edmond Tran.

After several delays, keen players will finally get an invite to all the gore and glamour of Hell-A when Dead Island 2 launches for PlayStation 4, PlayStation 5, Xbox One, Xbox Series X/S, and Windows PC on 28 April 2023.