More than just a piss-take, The Looker, created by Bradley Lovell, is a tongue-in-cheek love letter to Jonathon Blow's opus, The Witness.
David Wildgoose 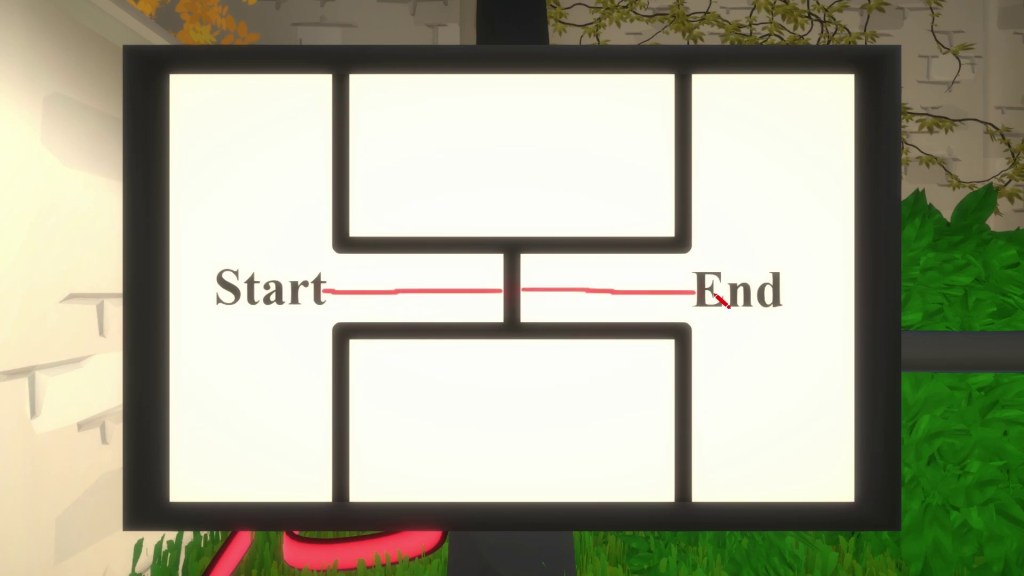 The Witness (2016) is a meticulously crafted puzzle game where you solve puzzle panels by drawing a line through a maze according to an escalating collection of rules. These panels, the island across which they are painstakingly placed, the audio logs you find, and the hidden videos you unlock, form a thoughtful yet contradictory meditation on the scientific method. In a sense, it reveals lead designer Jonathan Blow reflecting on his own iterative creative process. For all these reasons, it’s incredibly easy to mock.

The Looker, released in June 2022, is first and foremost a parody of The Witness. It, too, is set on an island decorated with a familiar-looking stone courtyard, castle walls and hedge maze, and dotted throughout is a series of panels leading you to an eerily deserted environment. As you interact with the early panels and discover that it’s possible to pass their challenges by simply drawing a line from start to finish outside the confines of the maze, you suspect it is likely to be little more than a one-trick pony – a single, yet admittedly quite funny, joke.

The Looker gets its cheap gags about ‘you’re just drawing a line lol’ out of the way early. Its subsequent puzzles – and the jokes they contain – work because they draw upon the same ideas The Witness explored, of how to teach the player your rules, how to subvert them, and how these principles reveal new ways of looking at that world.

For all its pointed taking of the piss, The Looker isn’t blind to what makes The Witness so good. It’s here to praise, not damn. The Looker knows that The Witness is a great game. It just wants to deflate its bloated sense of self-importance.

Bradley Lovell, the one-person creator of The Looker, clearly both loves and respects The Witness. His parody is too steeped in the same puzzle design for its mocking to be anything other than affectionate. And it’s funnier as a result, because it knows the exact things to make fun of, and how to subvert your expectations in clever and surprising ways.

‘I am a big fan of The Witness and its design,’ Lovell told me over email. ‘It is clear that nothing in the game is there by accident. What spoke to me the most was its exploration of ideas and design in a way that could only be done in a game. The Witness’ design is very unified in that it conveys its rules without teaching you and expresses its ideas without telling you.’

He explained that one of the main challenges of making The Looker was mimicking this approach, communicating nonverbally with the player through game mechanics while doing so clearly enough to tell a joke. He said he learned the tools and techniques for this by studying The Witness and Blow’s previous game, Braid (2008).

‘The Witness has certainly stuck in my head for quite some time [but] it has paid back more than enough to cover its rent.’

He adds, ‘I understand that The Looker isn’t exactly striking while the iron is hottest, but I think that is part of the reason players like it so much: it’s not just an opportunistic goof on the hottest trend, but a high-bandwidth parody that engages deeply enough with the source material that it calls up its memory instantly.’

It’s testament to The Looker’s success as a parody that it contains puzzles, even whole areas, that emulate The Witness so closely that they wouldn’t feel out of place in that source material. And yet these elements are also playful and funny in a way that Blow’s game only rarely gestures towards.

Lovell says it was this humour that provided the first inspiration for what would become The Looker. Earlier this year, he had become frustrated with the growing complications of the game prototype he had been working on. To clear his head, Lovell says he tried to brainstorm the silliest, most ridiculous game ideas he could imagine.

‘I was revisiting The Witness at the time, remarking on its clean design and subtlety,’ he recalls. ‘And I just started making myself laugh thinking of a version where all the puzzles are mazes off the Chili’s kids’ menu that you free-draw on with a Sharpie.’

I asked Lovell if he thought of the title first. The Looker is the perfect name, really, in that it is so awkward and stupid that it feels simultaneously sloppy and slapdash yet unerringly precise in its ability to skewer.

‘I thought of the title early on,’ he said. ‘Since all parody relies on bathos, the remarkable characteristics of The Witness are what make The Looker possible. Whereas the title ‘The Witness‘ has several interpretations, each of which intimates a piece of its deeper meaning, ‘The Looker‘ barely has one interpretation, and it is so indecently literal that you have to avert your eyes in the dread of awe.’

Since its launch in mid-June, The Looker has proved a success – though perhaps not in financial terms, it’s free, after all – with over 6,500 reviews on Steam and an ‘Overwhelmingly Positive’ rating. Clearly, it has resonated with players. Yet in some of the responses I’ve noticed an element of people concluding that Lovell must hate The Witness. As we’ve seen, the opposite is true. But I wanted to know how he interpreted this type of response.

‘The Looker is a short and rather concise game that comes in the guise of a shitpost about The Witness, so it makes sense that some players would perceive the game as critical,’ Lovell wrote.

‘As the developer, though, I got to see the process of working on the project day after day over the many months of development, and I studied The Witness very closely in order to approximate its look and feel. It would have been really exhausting to take that kind of time and care with something I didn’t like or didn’t think was important.’

Lovell adds that he’s discerned a deeper message recurring throughout the responses I mention.

‘The most consistent theme in The Looker’s reception is that it strongly recalls players’ experiences of playing The Witness,‘ he said. ‘The Witness has a lot of unique sights to see, and whether players liked or disliked what they saw there, they all seem to appreciate the feeling that someone else saw it, too.