The Diofield Chronicle is Square Enix’s answer to Fire Emblem

The Final Fantasy publisher tweaks its strategy for The Diofield Chronicle, a new tactical RPG, and the result has us curious for the long haul.
Edmond Tran 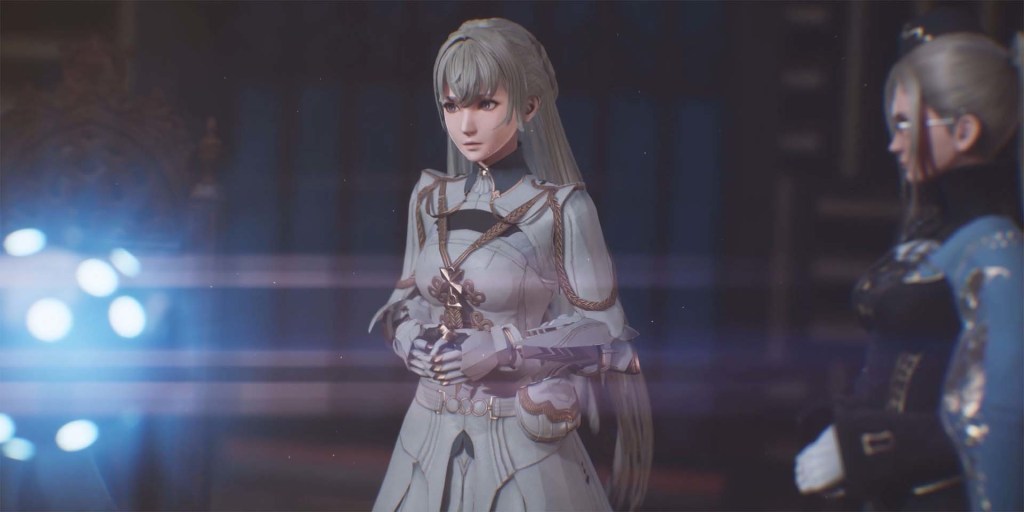 The first thing that struck me about The Diofield Chronicle, the latest high-fantasy RPG experiment from Square Enix, is that it gets into the action surprisingly quickly. I’m used to so many of Square’s modern, non-Final Fantasy titles being a huge slog in the beginning, as the lore, characters, and world are established through reams of dialogue boxes – Triangle Strategy, Octopath Traveller, Bravely Default are all guilty, and I was thinking that I’d reached a point where I might be done with the genre.

Read: The DioField Chronicle Review – Real-Time in an Unreal World

But The Diofield Chronicle takes a different tact, and it’s not long at all before you’re actually in your first battle, with the meat of the story missions following not long afterward. It has a few key differences to these aforementioned titles – The Diofield Chronicle doesn’t lean on a pixel art aesthetic for one, allowing for a lot more character expression, meaning the vocal performances are more engaging.

The direction of the performances are also a noticeable point of difference. I typically associate Square Enix’s English vocal performances with grating, over-the-top British accents that compensate for the less detailed characters. But The Diofield Chronicle tones it down a bit, with more understated performances and accents, which results in something that feels more mature.

This is, I’m going to assume, seemingly the intent. One of the key points Square Enix is trying to push with The Diofield Chronicles is that the composers who scored the popular HBO series Game of Thrones are on board here, so there’s a natural assumption that this high fantasy RPG is skewing its approach to try and appeal to some broader tastes. Hence, the quicker, more action-packed opening that leaves the meatier narrative details until later.

The Diofield Chronicle quickly sets you up with three childhood friends, who also happen to be absolutely incredible fighters – one’s a mounted knight, one’s an assassin, and one is an absolute tank of a soldier. Based on a tip, they stop a bandit ambush, and the person they’ve saved just so happens to be a government official looking to form a private military unit.

The three friends rise to become the highest ranking soldiers in the unit in a matter of minutes (I really wasn’t kidding about the fast-paced opening), and are then placed to begin taking curious, pot-stirring missions from various factions around the game’s fictional kingdoms and nations. Through this, they slowly learn more about the region’s political history, power dynamics, and personalities along the way – it’s only about an hour or so until you begin to deal with a mission regarding sex traffickers, if that’s an indication of the kind of direction Diofield seems to be heading in.

There are essentially two alternating phases in The Diofield Chronicle.

The first phase is a third-person, free-roaming portion of the game where you can explore the headquarters of your private military company, chatting to characters and learning a bit more about them. Along the way, you pick up subquests to be completed within the base or on the battlefield, and work with various individuals to upgrade your squad’s weapons, class abilities, items, and so on.

For those who are turned off by the hurried pace of the game’s setup, there’s also a library you can stop into very early on, where you can devour pages and pages detailing the history of the world at your own leisure.

The second phase is in the battlefield – isometric, real-time tactical sorties where you can pause the action at any time to assign orders or actions to each unit.

For anyone who’s played Fire Emblem: Three Houses (and judging by Nintendo’s sales figures, that’s quite a lot of people) this structure will feel very familiar to you. While The Diofield Chronicle doesn’t quite have the delightful social aspect of Three Houses (at least from the opening hours that I played), the ebb and flow of coming back from a battle, debriefing with your friends, and preparing for the next one is here.

There isn’t quite that big hook in the ‘planning’ phase of the game – at least not in the early hours – but I was quite taken by the real-time tactics portion of The Diofield Chronicle.

For those familiar with real-time tactical strategy games like Deperados, Shadow Tactics, or Commandos, you will feel right at home here. You’ll be micromanaging four different units on the battlefield as you dispatch enemies and work towards whatever objective the map demands by making liberal use of the active pause, assigning specific orders to your units, and then letting it all play out.

You can set specific patching waypoints, of course, which is important given The Diofield Chronicle’s emphasis on positional damage and ambushes. Characters will also auto-attack, which lets you put your focus more on positioning, clearing your units from area-of-effect attacks when necessary, and most importantly – using each specific character’s devastating abilities.

Separated into classes, each character has their own set of skills that focus on things like healing, area-of-effect damage, high single-target damage, or manipulating enemy positions on the battlefield. Abilities are limited by a metered resource, of course (though it’s easily replenished with items or pickups on the field) as well a cooldown for each character that affects all their skills – no matter which particular skill you use, you’ll have to wait before using another.

Though you can only control four units on the field at once, each can be assigned an adjunct – these are main characters, mind you – who will share their own specific abilities with the character they’re assigned to. There’s the potential for some interesting decisions to be made here by mixing and matching character classes together.

It’s a combat system that proves itself to be quite engaging very quickly – and though you’re fighting regular human soldiers for the first few missions, your micromanagement skills are quickly put to the test as The Diofield Chronicle suddenly throws in things like skeleton armies and hulking, giant mini-bosses to really push you only a couple of hours in – it got to a point where really I wished I was playing it with a mouse and keyboard, rather than a controller.

Thankfully, you’ve got some supernatural help on your side too – like summoning the Square Enix-favourite mythical dragon, Bahumut, to raze the entire battlefield with dragonfire.

The Diofield Chronicle certainly feels like Square Enix experimenting with something different with their RPG output, and I’m definitely curious to see what the long-haul has in store for this one. It’s a strong, sharp start, and that’s great – I’m definitely past the phase in my life where I can handle RPGs which ‘get really good after 10 hours’.

A demo of The Diofield Chronicle is now available for PS4, PS5, Xbox One, Xbox Series X, Nintendo Switch, and PC. Progress from the demo will carry over to the full game on respective platforms, which launches on 22 September 2022.