Rollerdrome preview – Slave to the nosegrind

Rollerdrome features vivid movement, complex mechanics, and a sense of fluidity that leaps off the screen.
Leah J. Williams 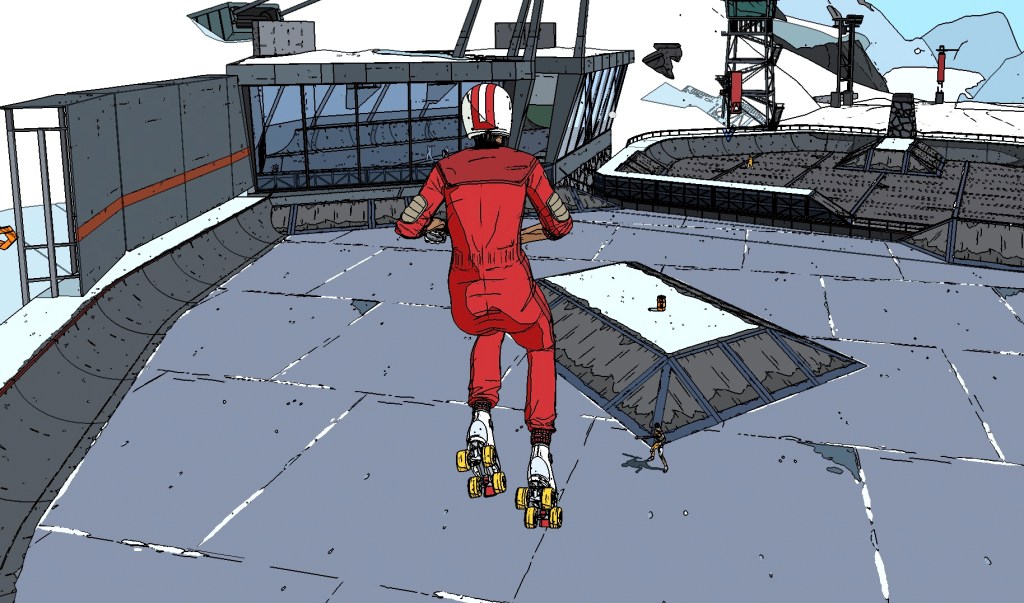 The year is 2030, and you live in a hellscape. Your world is ruled by capitalism, and a societal devotion to a bloodsport known as Rollerdrome. Combining the fluidity of rollerskating with deadly shoot-outs, this sport isn’t strictly a fun activity – it’s a necessity as your loans mount, and your world starts to look bleaker. Forced into life in the Rollerdrome, it’s your job to put aside your fears, conquer your rivals, pull off epic tricks, and become the queen of the dome.

Your road is never easy, however – and it turns out, even the qualifying stages of your journey will throw up major hurdles. Rollerdrome is a complex game – I discovered that much in a recent preview. It’s not just a rollerskating simulator, and it’s not just a shooter – it combines slices of gameplay from both genres, mixing them into a wild and over-the-top ‘roller-combat’ fighter.

In each of the game’s stages, you must eliminate waves of enemies with ammunition earned by pulling off skating tricks. Later stages contain more powerful enemies, while the early levels are more about teaching the flow of the game. The tutorial takes you through these motions with great care, highlighting where to wall grind, where to grab, how to jump, and how to earn higher scores with graceful spinning movements.

Then, it takes you through combat – how to use handguns and shotguns, pull off perfect sniper dodges, and get the most out of your ammo, all while performing tricks to keep your guns stocked. The game adds layer after layer, and more controls than you’ll know what to do with – a double-edged sword that makes survival in Rollerdrome a tricky balancing act.

You’ll want to spin, and grab, and jump as high as possible as you make your way through each stage – and you’ll want to survive, dodge enemies, and explosive obstacles. The dance is certainly possible, and you’ll learn to balance style, finesse and shooting with time, but the game is frequently overwhelming, and requires multiple runs to fully understand.

On the surface, Rollerdrome looks easy – and you can certainly trick yourself into a sense of false bravado in the early rounds. But the longer you spend with the game, the more layers are added. Pulling off tricks becomes riskier as heavier and better-armed enemies join the fray, and you learn new moves. Despite this added challenge, you still need to perform tricks to earn style points and ammo – and without these, you can’t advance through each stage.

It’s not enough to run and gun, you need to perfect a balanced combat style with grace and speed. To get a good run, you need to work up major kill combos, rack up full ammunition with tricks, and breeze past each level’s high score – but if you put a foot wrong, or find yourself losing rhythm, you can easily lose your lead and have to start a level over again.

It’s all about the dance.

There’s a fluidity in Rollerdrome that shares a lot in common with the recent hit OlliOlli World (also developed by Roll7). Once you start Kara Hassan (the protagonist) moving, the action of the game can’t be stopped. There are no spills or breaks here – every motion is weaved into the story, with Kara jumping and twisting based on your frantic inputs.

Turning left or right while in the air will pull off a whirl. Airborne rollerskate grabs earn phenomenal points, as does grinding on rails (each stage is designed to be bubble-like for maximum style and speed potential). You can pull off a full forward roll in mid-air, dive around obstacles and bullets, or slow down time for a trick shot.

The speeds you gain are fairly eye-popping, but with a brilliant cel-shaded art style and a bold-coloured world, Rollerdrome‘s action is flashy, streamlined and clear. It looks rather like a comic book, with all the action underscored by gorgeous explosions, and dramatic motion lines.

Where Rollerdrome falters is in its level structure. In campaign mode, you’re required to advance through stages to eventually reach the ‘finals’ of the gnarly bloodsport. Each stage is themed, similar to the action of Tony Hawk’s Pro Skater – there’s a shopping mall, a roller rink, and a snow-capped arena in the qualifying rounds. Each has its own environmental puzzles to traverse (it’s particularly fun to smash through glass panes during your spins), and they all come with special goals to hit.

These include: collecting all combo tokens, performing a 10x combo, topping particular scores from ‘iconic’ Rollerdrome players, or wallriding one part of the environment. Many of these are achievable, but you’ll eventually hit a point in the game where you can’t advance without completing these challenges.

I ended up completely locked off from the fifth game stage because I hadn’t spent time hitting the goals for each level. A significant number need to be completed to advance, which requires players to re-enter earlier levels and attempt to hit new high scores, while fulfilling specific criteria: wallride the ski lift, perform a grab under the triangle symbol.

While this does aid the measured pace of the game and encourage players to revisit each stage with greater care, it also messes with the flow of progress. This wall is easy to hit early on, and if you just can’t hit the challenges you need to advance, you’ll quickly find the experience frustrating. Some goals are easy – knock five rockets out of the air – others require you to repeat levels again and again, reaching for that far-off perfection.

It’s a minor foible, given the gameplay itself is engaging and wonderfully fluid, but the feeling of being held back is annoying. It’s easy to complete courses over and over, and rarely make any progress at all.

Beyond this complaint, I found myself enthralled by the world of Rollerdrome. The action is extremely tricky to master, and complicated by ever-evolving controls, but the sense of speed and style you can earn with time is extremely satisfying. While combos and perfect scores dance out of reach in the early stages, you can eventually settle into the rhythm and get your body rolling in harmony, even as snipers and heavies attempt to sway you from your course.

The complexity of the game did end up being a major surprise, but with a measured tutorial and plenty of room to explore the best methods of tricking and shooting, there’s enough scope to grapple with the challenge of gameplay, and come out unscathed on the other side.

Give Rollerdrome your patience and attention, and it will reward you in bloody spades. After several hours with the game, I’m more than ready to hit the rink again and see what my enemies bring to the floor.

Rollerdrome is set to launch on 16 August 2022 for PC via Steam, PlayStation 4, and PlayStation 5.