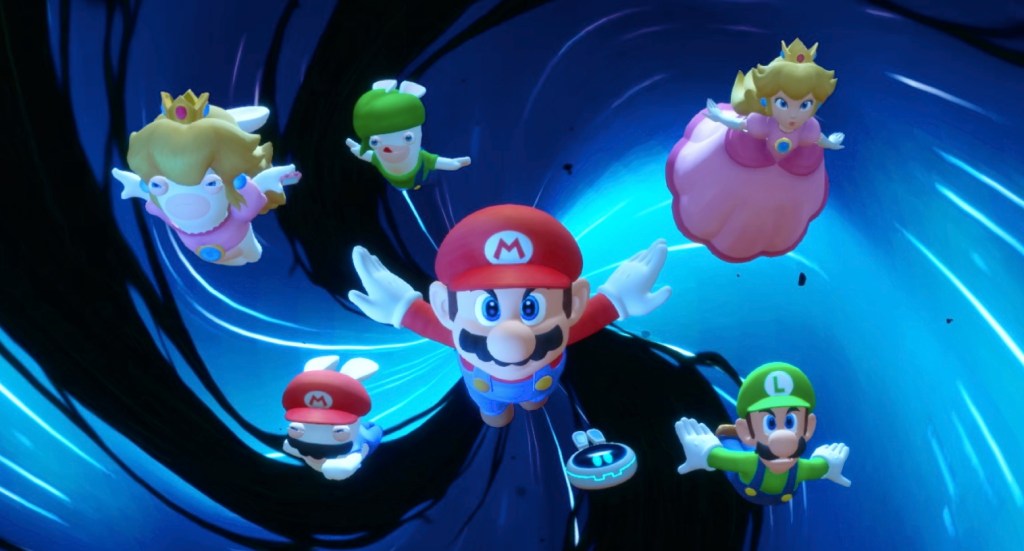 Mario + Rabbids Kingdom Battle still feels like an impossible game. When it first launched, the Rabbids were seen as cultural interlopers – the dastardly beasts that had stolen the Rayman franchise out from under its long-serving protagonist. There was no goodwill in the tank, and the announcement of Kingdom Battle only served to whip Rayman fans into an outrageous frenzy. But when it finally launched, the criticism swiftly dried up; the fans were won over by the charms of Kingdom Battle – its slapstick sense of humour, its hearty combat system, and of course, Rabbid Peach’s antics. In the upcoming sequel, Mario + Rabbids Sparks of Hope, the humour and charm are dialled up to phenomenal proportions, for an impressive and delightful romp.

In a recent media preview, I was able to get hands-on with two separate chunks of the Sparks of Hope story – the first, a romp through Beacon Beach, followed Mario and his pals through a sandy shore filled with murky ‘Darkmess’ and a host of looming threats. The second spotlighted an early boss fight with ghostly Rabbid, Midnite, whose tricky ways forced many in my media session to give up their quest.

The opening chapters of Sparks of Hope begin with a manta ray-assisted attack. Your quest kicks off innocently enough – Rabbid Mario has lost his pants somewhere near the Mushroom Kingdom castle, and it’s your job to get them back.

You complete your quest with grudging approval, but then – the sky goes black, consumed by the inky darkness of a strange manta ray-like beast. The scene will be familiar for those who’ve played Super Mario Sunshine – and it’s a great callback for the wider Mario mythos. As in the past, this flying manta ray isn’t friendly, and instead sucks up the denizens of the Mushroom Kingdom, initiating a wild, high-flying battle through space. It’s here where the game’s refreshed combat system gets a chance to shine – and the possibilities of Sparks of Hope light up.

Much has been made of the updated combat system of Mario + Rabbids: Sparks of Hope – which has been described as fundamentally different to the action of Kingdom Battle. That’s not quite the case, but there are a bunch of clever tweaks here that give players ample opportunity to experiment with their hero teams, and forge a path forward.

Each hero in your team (you begin with two, and advance to three) has access to a primary ranged weapon, a special ability, unique items, and a damaging dash for deployment on the battlefield. These must be used strategically to gain the best advantage.

You’ll need to keep balance in mind to take out every enemy, even in the early stages of the game. You’ll also need to consider how to maximise your damage, remove the most enemies from play, and still end your turn hiding behind cover, to prevent yourself from being walloped when it’s the enemy’s turn to move. Combat largely remains unchanged here, with the free movement of Sparks of Hope being the largest and most notable improvement.

Rather than sticking to a grid, you can roam around anywhere within your character’s movement limits, meaning you can go for a walk within your bounds, using this freedom to assess your surroundings and analyse enemy attack ranges or weaknesses. Once you understand the force you’re facing, you can then initiate an epic chain of attacks.

A single character turn could involve sliding to hit enemies, deploying an item to recover health, using a special ability (including a Spark-assisted attack), hiding behind cover, and then unleashing a ranged attack. The range of options is phenomenal – but also places a great deal of pressure on players.

Make a silly mistake or waste a move by not deploying it first in your turn order, and you could end up falling to enemy forces. This will likely be common in your early playthrough, as it was mine – there are teething issues to work through as you strengthen your knowledge of strategy, and how the action plays out.

Thankfully, the combat system balances deep strategy with a slapstick sense of fun, and it encourages players to repeat turns and find new ways to advance when they fail. Even if it grows frustrating – the Midnite boss fight, for example, took three attempts and plenty of strategic planning – you’ll always have the game’s delightful cast of characters to keep you entertained.

I could survive a harsh winter on the joy of Rabbid Peach’s battlefield exclamations, I believe. Her goofy little laugh and complete apathy towards enemies is infectious. ‘It’s been real!’ is my new catchcry.

It also helped me forge forward in that aforementioned Midnite fight, which forced some of my fellow players to give up outright. On this battlefield, you’re attempting to take down Midnite herself, while avoiding her goon squad and watching for her appearance on the battlefield.

This battle is extremely tricky because Midnite teleports around the arena, and her massive goons have a wide stalking boundary. They can also leap over obstacles to crush you – and there are plenty of them on the battlefield.

The primary goal of the fight is to take down Midnite herself, and that requires making tough choices. You can either fruitlessly pursue each goon and prevent damage to your wider team (which at this stage also included a deadly Rabbid named Edge) or you can spread your team apart and plan for those lucrative Midnite appearances.

Taking a strategic approach does require a step back to analyse your situation, but once you have the lay of the land, you’ll find ways to exploit your surroundings and survive – occasionally, by the skin of your teeth. Comparatively, Sparks of Hope feels like a more strategic game than Kingdom Battle, with smarter decisions needed on the battlefield if you have any hope of seeing your journey through to the end.

That said, you’re not just spending your time in Sparks of Hope chipping away at enemy health and pulling off those gratifying dashes. When you’re not running and gunning, you’ll also have time for exploring and puzzling – to a greater extent than Kingdom Battle allowed.

While the gameplay preview I was privy to only included two distinct realms, each came jam-packed with environmental puzzles – pulling and pushing blocks to open up a waterway; finding the right doors in a haunted castle; navigating an underground sewer – that provided a breath of relief away from the nitty-gritty of battle.

In cloistered alleys and between sand pits, you’ll find a variety of quests in each realm – various NPCs will tell you their struggles, and you’ll then set off on a grand adventure to field their woes, by defeating roaming enemies, discovering hidden items, or completing mini puzzles. Some quests take you deep underground, into strange laboratories and icy realms, while others send you breezing past sand dunes, or rifling through lonely hedges.

Each aspect of the game compliments the other, with these quests breaking up the fast-paced, frantic action of the battlefield. The spaces between major missions are great for having a wander – and there’s plenty to discover when you’re not fighting for your life. These moments let you appreciate just how much bigger and more impressive Sparks of Hope is, when compared to the relatively linear realm of Kingdom Battle.

While Mario + Rabbids Sparks of Hope has been described as a spiritual sequel, rather than a direct one, there is at least a distinct sense of familiarity along each road – one that shone through in my time with the game. Where Sparks of Hope differs is in its scope and ambition. It aims to bigger and better than its predecessor, with tweaked combat that focuses on strategy over power, and a wider open world to explore. After three hours with the upcoming game, I’m convinced that it will achieve its goal – becoming a bolder and more dynamic game than Kingdom Battle.

The franchise still feels like a miracle – and this sequel is no exception.