The world and characters of Kardboard Kings are fascinating, but the game plays more like a proof of concept that leaves you wanting more.
Pedro Cooray 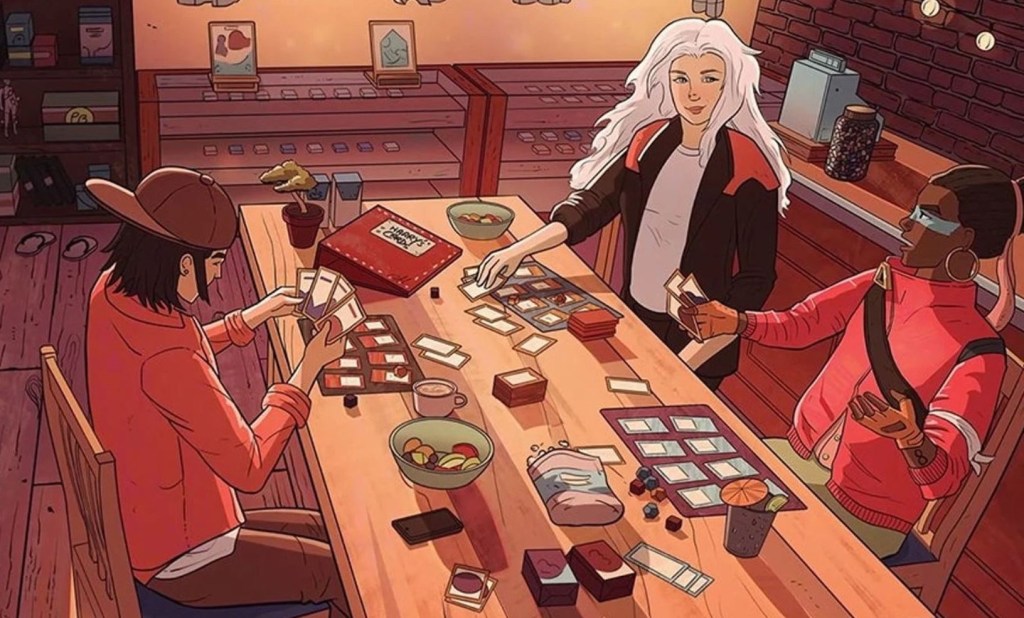 Kardboard Kings is a refreshingly Aussie take on a shop management simulator. It’s set in the fictional beachside suburb of Parakeet Bay, New South Wales, where the arrival of dudes named Davo and jokes about Perth are welcome, common occurrences.

The game’s Australianisms and unusually strong focus on narrative and character relationships set it apart from others in the genre. Sadly, despite being a full release game, these elements fade away sooner than expected, leaving major plot points and gameplay elements unexplained, and hard to discover. Kardboard Kings leaves a lot more to be desired.

You play Henry, a young man who has recently inherited his father’s trading card shop. ‘Warlock’ is the Magic: The Gathering-esque trading card game that everyone in town seems to love, and cards for the game are all you sell. The opening scene sets up the idea that six unique Legendary Cards from Warlock have all gone missing, though it isn’t immediately clear how that relates to Henry.

You quickly learn that local news alerts determine the market value of individual cards or all cards with a particular quality in common, so it’s important to pick cards that will sell at a profit for each in-game day, while also keeping track of which cards will lose or gain value in the coming days. It’s possible to go into detail tracking individual card costs, but I never found an obvious benefit to planning more than a couple days ahead, as hovering your cursor over a card tells you whether it’s above or below market price for that day.

You gain new cards in Kardboard Kings primarily by buying them online with your profits. Each day gives you a selection of shops to buy the cards you need, but since both the shops and the cards they sell are random each day, it’s difficult at times to get what you want. This difficulty is compounded by limited-time requests for cards that match specific criteria, which at a couple of points I failed, purely because the shops that sold the cards in question didn’t appear for me in time.

The cards themselves are beautifully designed, and are easily marked so you can identify their set, type, and power level at a glance. Each week will release a new set, designed around a particular artistic theme – my favourite being a convincing pastiche of Pokemon.

Each day, customers come in to buy the cards you’ve chosen to display. It’s a simple loop, made satisfying by the presence of recurring characters.

Some show up according to your actions – like the immigrant surfer postman who delivers you your cards – but the most compelling characters arrive at their own speed. Their dialogue changes as you speak to them, playing out a short, enjoyable arc over time.

Outside of these arcs, the way you talk and respond to characters affects your reputation as a store owner, which dictates how many customers and requests you get. It’s easier to lose reputation than gain it, at least early on. If a character tries to sell you a card at lower than the current market price, for example, fleecing them will lower your reputation. The important thing is to try and keep your customers happy, no matter what.

You’re able to throw card drafts and tournaments in your shop, and these will be attended by the character who you have the most affinity with. Kardboard Kings is at its best when it combines the intrigue of these characters’ lives with its shop mechanics. The narrative becomes surprisingly complex through your relationships, as characters you thought you knew will sometimes behave in notably unexpected ways, leading to surprising reveals.

And then, quite abruptly, the credits roll.

The game continues after the credits, but the credits signal a significant shift in how Kardboard Kings plays out. After playing for several more in-game weeks, I found the story never came back, leaving me with the feeling that the plot should’ve been doled out more gradually.

Most of its important characters vanish after the credits, making their importance to the story seem vague. Your friends will continue to come in to let you increase your reputation, but their dialogue is repeated once their short and promising character arcs end. You’re left with a perfectly competent shop management sim, but one whose mechanics are far less engrossing without the narrative elements that were previously there.

I wasn’t even really sure if the game had ended or not.

An example of the aimlessness of Kardboard King’s postgame comes from the aforementioned Legendary Cards. I received one through the story, one by talking to a friendly NPC, and another from an NPC long after they had started repeating dialogue, presumably after I had completed a challenge I wasn’t aware of.

The obtuse conditions to obtain the Legendary Cards are confusing, and there’s very little motivation to find them when the game seemingly presents them as the result of random chance. Similarly, when I finally maxed out my reputation, the game treated me to a brand new cutscene celebrating the fact… and then played the same cutscene at the end of every consecutive day after that, as if Kardboard Kings wasn’t expecting me to make it that far.

A lot of thought has been put into building the fascinating, card-obsessed world and characters of Kardboard Kings, but very little of it is shown to the player as it currently stands. The developers promise updates in the future, and they feel very needed. A fleshed out narrative and more player incentive would definitely help. At the moment Kardboard Kings plays like a proof of concept for something more exciting down the line.

A PC version of Kardboard Kings was provided for the purposes of this article. The game is available now on Steam.