Gunbrella preview – A rain-soaked gothic Western to die for 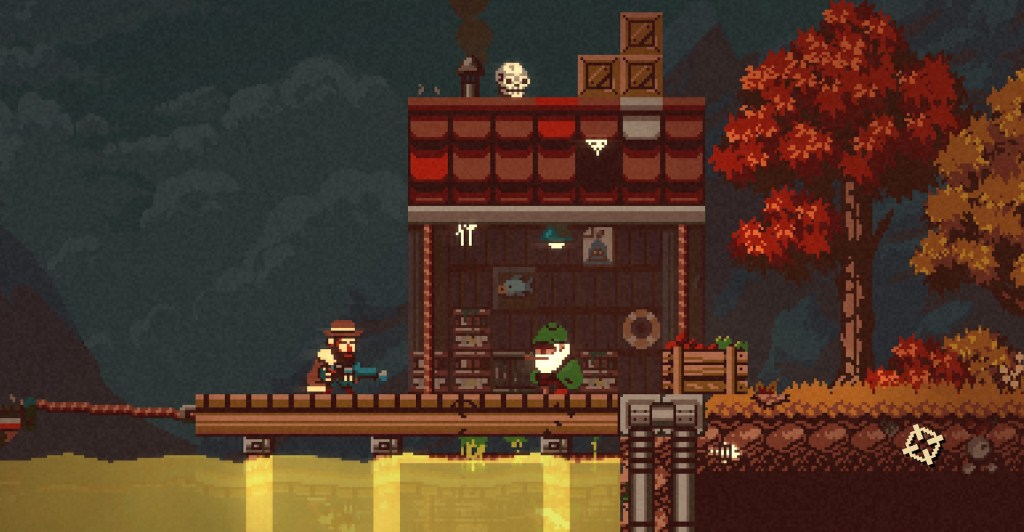 Gunbrella is an enigma. At its core, its mechanics feel simple and familiar – you play as a lone gunslinger traversing a hostile, 2D platformer world. But as you discover the real flow of the adventure, you’ll find far more complexity beneath its surface, and a cavalcade of unlikely inspirations backing gameplay. Even in the game’s opening hour, familiarity quickly gave way to surprise with each corner hiding a neat, unexpected twist.

Ahead of PAX Aus 2022, I was given access to a meaty preview of the game that effectively shattered my expectations of what exactly Gunbrella was. Rather than a simple Western story with a neat mechanical twist, it swiftly revealed itself to be an eldritch horror tale inspired by a 1930s cartoon aesthetic, gorgeous pixel gameplay, and a combination of Castlevania and Nintendo DS classic, Super Princess Peach.

Super Princess Peach is an odd reference point for a modern game – but Gunbrella‘s movement and umbrella controls certainly bring to mind the floaty platforming of this colourful and underrated spin-off.

Your primary tools while playing Gunbrella are your shotgun, grenades, and the titular gunbrella itself, which can help you zip through cloistered stages, or float to safety on the ground below. To successfully pull off grand jumps and wall-hopping moves, you will need to input a finger-twisting array of commands – but once you understand the flow state of movement, you’ll learn how to pull off quick jump-dashes and floats that’ll boost you into the higher regions of stages, to discover new secrets and roaming, gun-toting enemies.

Button-mashing mastery leads to balletic, sleek platforming where you can flow along the screen in perfect motion, taking down enemies as you pass overhead. The dramatic tête-à-tête in each diorama-like stage becomes more complicated the further you travel, and the more enemies appear – but once you analyse and understand each scenario, you’ll realise the solution to each combat ‘puzzle’.

While Gunbrella doesn’t strictly operate on a rhythm or beat – the game’s world is fairly sparse and light on tunes – combat does feel like a dance, as you work out your best attack plan, and how to maximise damage. The game’s protagonist has only a few health bars, which means strategy is essential for conquering rooms of enemies. You need to decide where to flow, what obstacles stand in your way, and how to avoid certain death.

You will die – a lot. But even in death, you’ll learn more about your next approach, how enemies react, and just how far you can wing it with speed and confidence.

Take the above puzzle, for example. Here, the best option is to run along the ground, unseen, and take out the middle enemy from below. Then, once the other enemies are alerted to your presence, you’ll need to jump up the left side, using the gunbrella for a boost, taking out the next enemy from above. A quick hop-step-jump to the right, and you’ll be squaring down the final enemy with a shotgun blast to the face.

Each new room you encounter has this unspoken flow. Hidden, but discovered on the way through trial and error, and a deep observation of surroundings. There’s no one way to complete these puzzles, but there’s always a clever and efficient solution.

In the later parts of the Gunbrella preview demo, more puzzle elements came to the fore – including in an environmental challenge that asks players to solve a riddle to advance to the first boss dungeon. Again, this was deceptively complex – with the puzzle requiring comprehension, while foes beat down doors and caused trouble on every level.

Beyond this neat puzzle lay Gunbrella‘s first big, bloody secret – a fleshy, oozing monster with a single, bulging eye. While the early parts of the game feature your standard Western gunslinging, it isn’t until you breach the final walls of the first major castle that you realise what you’re really stuck in – the spooky, glorious horror Western genre.

Locked in a tower with a pockmarked, Cyclopian beast, you need to put every skill you’ve learned in Gunbrella to the test. Use jump-boosts to escape flowing tentacles. Shotgun and throw grenades through blasts of slimy, flying flesh. As the creature crawls along the ceiling and spreads across the ground, you’ll need to slip and slide your way along the floor, deciding when to weave and when to dodge – all in perfect harmony.

It’s a brilliant, oozing dance that typifies the originality and flow of Gunbrella. Meaty, well-controlled movement and combat means the action, while occasionally difficult to grasp, feels polished and satisfying. Getting a win requires patience and timing, but victory is well-earned and rewarded.

As a lone gunslinger, the task ahead of you in Gunbrella is daunting. The road is littered with weirdness, bursts of flesh, strange country towns, and a looming, cult-like presence – but with your handy gunbrella by your side, any challenge can be conquered. Any heart can be won.

When Gunbrella launches in 2023, expect it to steal your heart, too. If you’re keen to check out the game for yourself, a demo is now available on Steam. Fair warning, it is fairly bloody – but it’s also bloody good.