The opening sections of God of War Ragnarok feel familiar, but there are promising hints of how grand this new adventure is going to be.
Edmond Tran 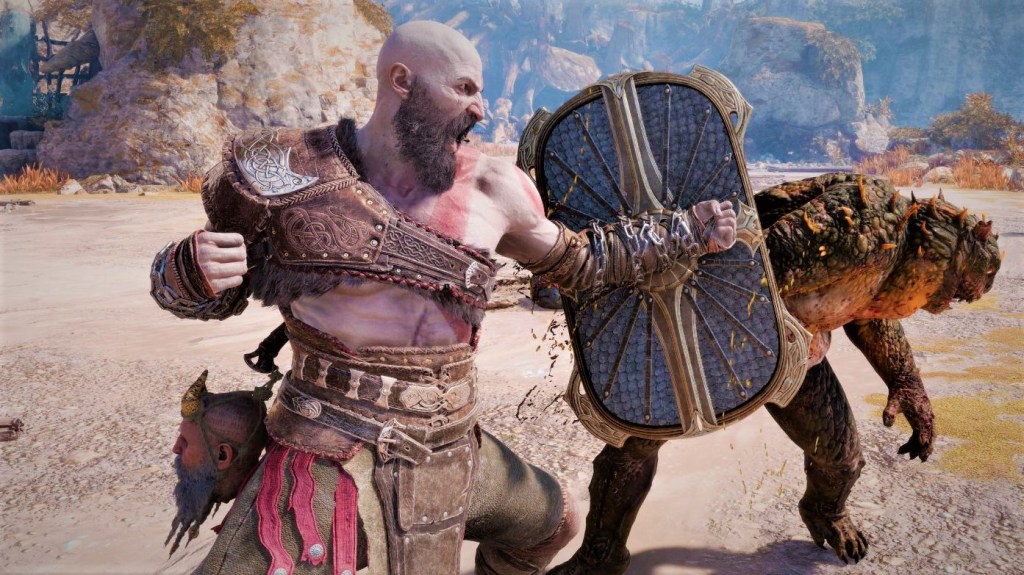 If you’ve played through the 2018 version of God of War, you’ll have a pretty clear idea about how the long-awaited sequel, God of War Ragnarok, is going to play. In fact, the first six hours of the game – which is all I’m at liberty to talk about at the moment – feels a bit like a recap of God of War.

Update: Our God of War Ragnarok review is now available to read, where we expand on the experience of the whole game.

In terms of narrative, the three main characters – Kratos, his now tween son Atreus, and severed head Mimir – essentially catch you up on what happened in the last game, what they’ve been doing in the interim, and what the stakes are for this new adventure.

But it also feels like the first few hours of Ragnarok are recapping the main structural beats of the previous game, too. There’s the brooding, walk and talk open with Kratos and Atreus, (now with far more snow), which establishes the game’s ‘one long camera shot’ style (which is still excellent). There are bombastic, high-flying fights of cinematic, earth-shattering proportions. And then, there’s a quick realm hop with the comedic dwarven duo Brok and Sindri, and a rapid transition to the free-roaming, semi-open-world Metroid-like nature of the revamped series.

This free-roaming reveal was a significant moment in the 2018 game. It was an overturning of expectations – what we thought was going to be a very linear, rollercoaster ride of a blockbuster action game ended up being far more RPG-like, and focussed on freedom, with plenty of downtime for you to just enjoy the enlightening conversations between characters as you explore the world and discover its secrets.

I was initially taken aback at how quickly we got to this portion in Ragnarok – but it makes sense, given that plenty who have played God of War are clued into it by now. In fact, Kratos and Atreus are quick to cycle through (and sometimes discard) a lot of the new mechanics and equipment they acquired the last time we saw them.

Stepping into Kratos’ shoes feels very familiar as a result. The weighty melee combat system feels as satisfying as ever as you use your shield, Leviathan Axe, and (spoilers!) the Blades of Chaos to tear all manner of demonic monsters and godly opponents to shreds.

There are a few new combat bits and pieces up your sleeve in Ragnarok – some new pieces of equipment, a bigger emphasis on customising your shield, and the ability to charge up the axe or blade with their associated element to unleash a powerful, status-inflicting attack.

But God of War’s appeal isn’t just about combat – the strong focus on exploration, puzzle solving, and treasure hunting was also a big part of what made the previous game so engaging.

As you explore the Dwarven home realm of Svartalfheim in your canoe, you’re tempted away from the critical path to pursue a number of optional side tasks (that hold meaningful narrative value, mind you), solve plenty of environmental traversal puzzles, hunt for treasure and resources to upgrade your equipment, and discover plenty of surprises both (very) big and small that reward you for your curiosity.

When you do head back on the critical path, you’ll find yourself deep in an intricate dwarven labyrinth to puzzle and fight your way through, on your way through to finding the first big puzzle piece in Ragnarok’s plot.

It’s a whirlwind tour of the best kinds of moments of God of War, and feels like a wholly natural continuation of the previous game. In fact, it’s exceedingly familiar… even bordering on being a bit overly familiar and not at all new. As I said, the first six hours feels like a whirlwind recap of the 2018 God of War experience.

If I didn’t know any better, I could probably trick someone into believing what I was playing was in fact the original God of War – albeit with a truly impressive new suite of accessibility and gameplay customisation options. Mechanically, it feels almost identical – at least, to the memory of God of War in my head. Narratively, the writing and depiction of Nordic figures is just as sharp and amusing.

Technically, the environments look stunning as always, but I haven’t yet encountered a moment where things felt like a monumental visual shift, in the same way that Horizon Forbidden West did with its extreme abundance of foliage and hyper-detailed faces.

However, there are some subtle hints at what’s to come past these opening hours. For instance, there were several environmental objects I discovered in Svartalfheim that I haven’t seen before, and couldn’t yet interact with. I readily anticipate more Metroid-style backtracking with brand-new pieces of gear, and I’ve got my fingers crossed for the possibility of new weapons.

When using the mystic gateway to travel between realms, there’s a new in-game user interface, with all nine realms very clearly laid out – so I have high hopes for the two realms we’ve yet to see portrayed in the series, Asgard and Vanaheim (Svartalfheim is another new addition for Ragnarok). There’s also the fact that the titular calamity event of Ragnarok is coming, and all the realms we have visited in the first game are changing dramatically as a result. I’m keen to see how dramatic that gets.

Beyond this, there’s a prominent feeling that there just has to be something significantly new on the other side of this opening, yet to be revealed. 2018’s God of War had the big, ‘Surprise! It’s a free-roaming non-linear game!’ reveal. What will Ragnarok’s version of that be?

For me, the first six hours of God of War Ragnarok are a reminder of just how good God of War was. I’m hoping the next few dozen hours show me just how creative Sony Santa Monica has become in expanding on all those ideas over the last few years.

God of War Ragnarok will be available on 8 November 2023.

GamesHub’s full review of God of War Ragnarok is now available to read.