Tales of Tribute is a perfect, calming addition to the world of The Elder Scrolls Online.
Leah J. Williams 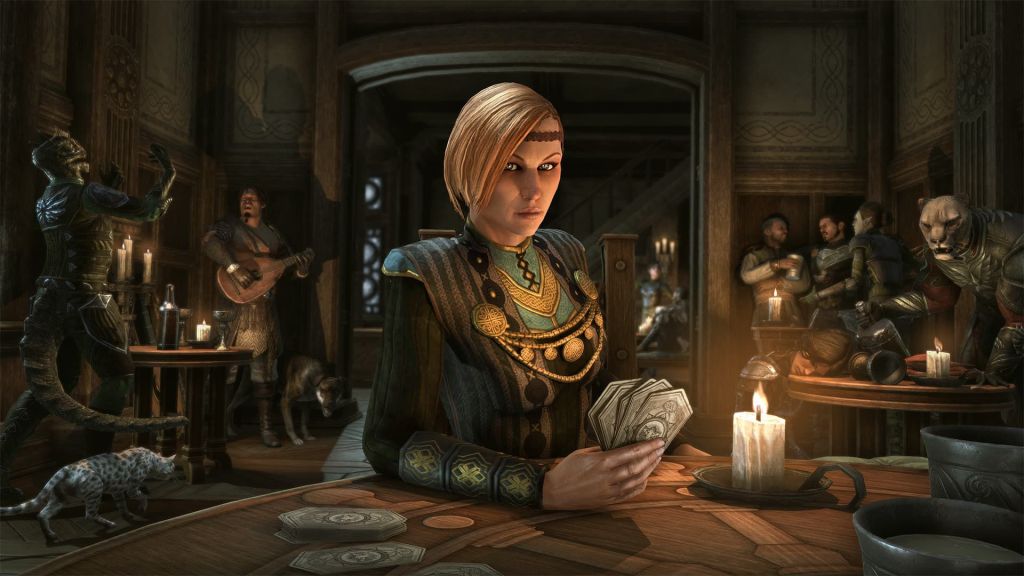 The Elder Scrolls Online: High Isle is the latest chapter of the long-running MMORPG, and while it introduces brand new quests, flashy battles, and a dense story of political subterfuge, its crowning achievement is Tales of Tribute, a spin-off digital card game where players attempt to build up power, appease special patrons, and conquer the tavern scene.

Despite a focus on adventure and exploration, the best part of ESO has always been its capacity to allow players time. There’s few timed imperatives in gameplay, which opens up the possibilities. You can spend your time wandering through fields gazing at sunflowers, or swimming in the ocean, or filling out the blank edges of the map.

You can also spend your time in Tales of Tribute – and you absolutely should.

The Tales of Tribute quest line is kickstarted in Gonfalon Bay, a new region in High Isle. You can either head straight to the Gonfalon Gambling Hall, or find quest notes littered throughout the area that reference the fresh new mini-game. Whatever your choice, your path will lead you to Brahgas, a wily Wood Elf (voiced by Lord of the Rings star Billy Boyd) who has a penchant for playing cards.

He’ll introduce you to Tales of Tribute, and explain every rule in a rapid fire round that’s actually fairly confusing – largely because Boyd’s voice acting is so enchanting it distracts from the introduction. Every move being guided adds to the muddiness – but once you break away from this first round and set off on your own quest to become a Tales champion, you’ll find a complex and engaging card game filled with tricks and strategy.

Tales of Tribute has to be played to be understood fully, but a brief rundown is in order. To win a game of Tales of Tribute, you either need to earn 40 Prestige points, or earn the favour of all four Patrons in the game (seen on the right side of the screen).

To earn Prestige points, you play cards from your hand. Some cards earn you Coin, which can be used to buy extra cards from the central deck. Other cards have Power on them that become Prestige when each round ends. Power can also be used to take down enemy Agents, thereby preventing your opponent from amassing Prestige.

At the end of your round, all of your played cards are filed into a discard deck, which eventually ends up back into your main deck for the next rounds. When 40 Prestige points are earned, play is over – although the Patron strategy can also come into play. Both tactics are completely valid, with Tales of Tribute’s gameplay being flexible enough to accomodate your preference. (Prestige points tend to be easier to earn, however.)

These card-based battles start off quite difficult, with even the novice players you take on in the Gonfalon Gambling Hall hiding tricks up their sleeves. But that just means you need to deploy crafty tricks – and you will need to be crafty as you play through rounds.

There’s important choices to make every turn. Do you collect the Agent card from the deck, knowing you may not be able to stack its combo ability for extra points? Do you spend all your coin on a claw card, in the hopes another will pop up later? Do you attempt to woo the Patrons, despite knowing some have complex rules for earning favour?

Each decision will bring you closer to victory, and a windfall of Prestige that could win you the battle.

Tales of Tribute is the perfect balm for the rest of High Isle, which focusses on high stakes diplomatic battles, and a world rife with tension. While you can certainly spend your time fighting back the forces of the Ascendant Lord and attempting to restore peace in the Systres Archipelago, Tales of Tribute is a tempting distraction.

It provides a nice, 20-30 minute break from the all the political antics, and really helps your brain switch gears. Where combat in The Elder Scrolls Online tends to rely on frantic clicking, Tales of Tribute is all about taking your time, and planning your next move – giving you room to breathe.

Each day, there’s a new challenge you’ll be able to take on via Tales of Tribute daily quests – and while they are optional, they’re also a great way to start your swashbuckling adventures through High Isle. Not every match you come across is easily won, but working out new ways to play (and how to grab all those elusive player decks) is a great new challenge to conquer.

Sure, it means you probably won’t get much of the main quest done, but that’s the fun of The Elder Scrolls Online. If you want to spend your time climbing up the ranks of a card game, the fate of the world can wait.

The Elder Scrolls Online: High Isle is now available for PC, and will arrive on consoles on 21 June 2022.