Destiny 2: The Witch Queen was inspired by classic sci-fi horror 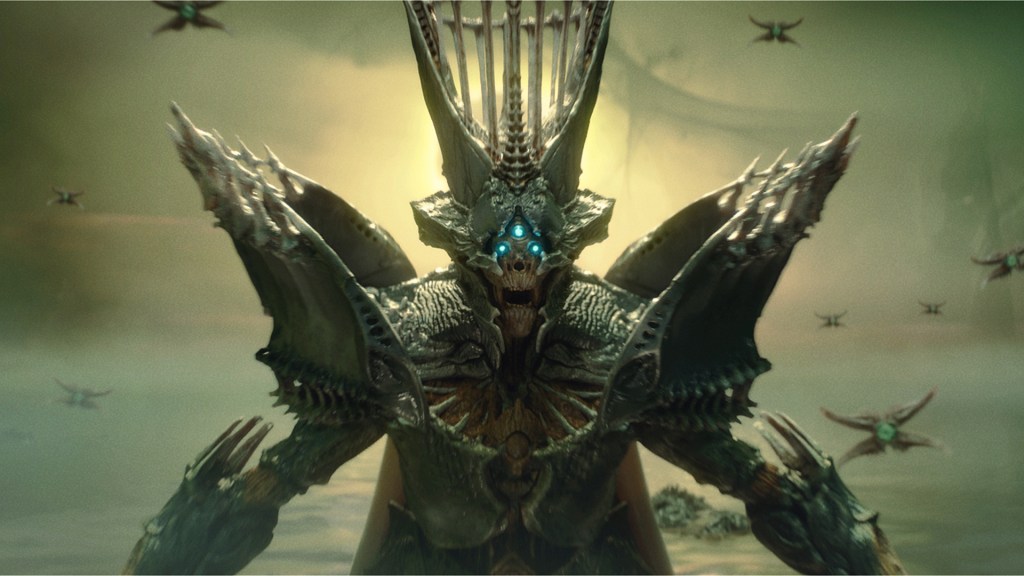 Destiny 2: The Witch Queen is an expansion to Bungie‘s long-running MMO shooter that’s designed to amp up the horror and the tension of the game’s narrative by exploring the rise of Savathûn, the Witch Queen, a member of the ancient Hive race. She’s a towering figure, and cuts an imposing shadow; her spiked crown reaches up to the heavens, and her strange, semi-organic body is covered in gnarly metal armour.

She’s a figure that looks straight out of a H.R. Giger nightmare – and according to developers at Bungie, that’s exactly where her inspiration came from.

‘H.R. Giger was an inspiration for the original Hive,’ Dima Goryainov, Concept Artist at Bungie said in a recent Q&A. ‘A lot of that DNA remains.’

According to Goryainov, the process of creating new characters typically begins with a visual palette that evolves over time. There’s basic foundational elements that stay along this journey, but the ‘look’ usually changes with each new content pack or expansion, to give a different feel to new stories.

The Witch Queen is seen as an evolution of the Giger palette first created for the Hive, which rose to prominence with Destiny 2’s Taken King expansion. While they share similarities, the visuals for this chapter lean more heavily into the horror realm.

Major sci-fi horror inspirations guided the art team – but Goryainov made clear that it was classic sci-fi that inspired the game’s palette, rather than contemporary. The major difference, according to Goryainov, is that contemporary is typically more cynical than its predecessor.

Characters are ‘cool’ or ‘bad-arse’ in contemporary sci-fi and the world is much darker, while in classic sci-fi, worlds are often whimsical, strange, colourful, and far more hopeful.

The Bride of Frankenstein was named as a core inspiration in the design of Savathûn, largely seen in her towering crown – but she has a softer side as well, which Goryainov explains can be seen in her delicate, moth-like wings. It was the complexity of the character that he most wanted to bring out in her terrifying design, speaking to a nuance that players will discover in the game.

In addition, the team also turns to 1926 film Faust for reference – one iconic image from this film is of the devil towering over a tiny town below. This served as a touchpoint for Savathûn’s imposing figure, and for the atmosphere the team aimed to achieve in The Witch Queen – one of dread, but not of hopelessness.

It’s this tone and balance that the Bungie team hoped to strike in Destiny 2: The Witch Queen.

‘Horror is an interesting thing for us to balance,’ Goryainov said. ‘Destiny is still a franchise about hope … when we introduce new environments … we want to create spaces that people want to occupy.’

That meant evoking feelings of eeriness or loneliness to explore those darker themes, via a narrative supported by a gloomy, sci-fi horror art palette, and a music soundtrack designed to provoke isolating, introspective feelings.

‘Hope is a core aspect of the sound of Destiny, from a musical perspective,’ Skye Lewin, Audio Director and Composer at Bungie said in the Q&A. In approaching the themes of The Witch Queen, it largely fell to the audio team to integrate the darker aspects of the expansion with that fresh sense of determination and hope, to encourage players along their path.

While Destiny 2: The Witch Queen certainly leans into those horror visuals, the narrative and score are designed in a way that comforts players, and encourages them to keep exploring. Every element works together to buoy players on their long and dire path.

With a human story that focusses on failure, triumph, and the secrets of the universe, The Witch Queen is an expansion that aims to build on the lore of the Destiny universe, all while carving out its own intricate, horror-inspired tale. While its journey may seem dark, there’ll always be light up ahead.

Destiny 2: The Witch Queen is out now for consoles and PC.