Playing Assassin’s Creed 2 in 2022 is a strange experience 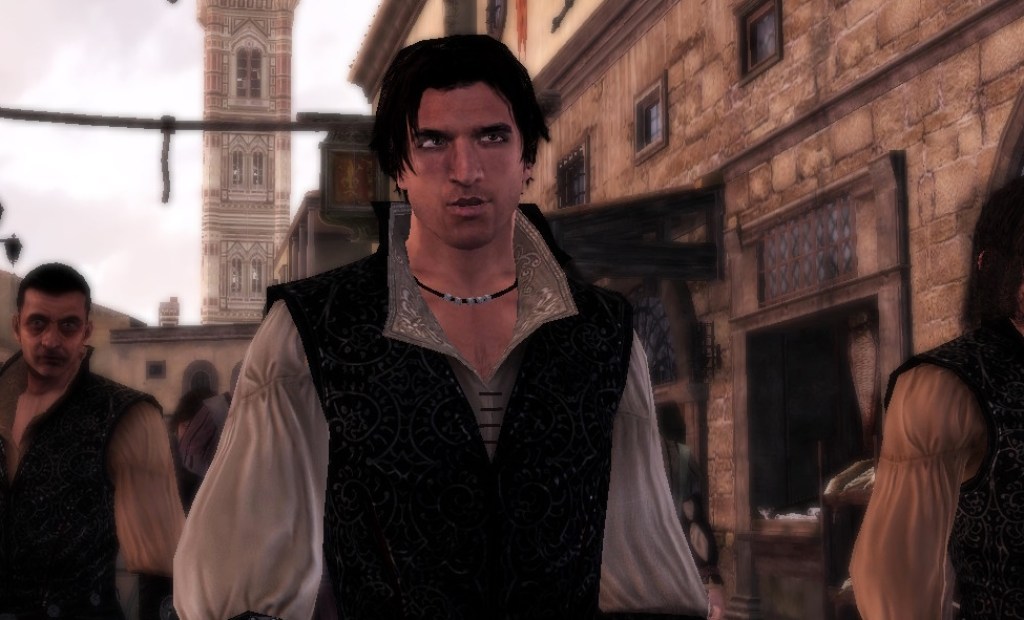 Replaying Assassin’s Creed 2 via the Ezio Collection on Nintendo Switch wasn’t the experience I thought it would be. That’s no fault of the game itself – it’s a great port, and one that allows the classic action-adventure franchise to run smoothly and without issues on the handheld console. What was strange was transitioning directly from playing Horizon Forbidden West, and realising just how far video games have come, even in the last decade.

My memories of Assassin’s Creed 2 have been warped by age. As one of the first modern titles that really excited me after a decade-long love affair with the PlayStation One ‘mascot’ era (Spyro, Crash, Ape Escape, MediEvil), it’s a game I held in high regard.

In my mind, Assassin’s Creed 2 was beautiful. It was a sweeping, golden adventure through the streets of Italy, buoyed by a lively cast and suave, endearing protagonist, Ezio. It was a smooth, sleek game with responsive controls and a vast open world that felt completable. I found some of this in my latest playthrough – but there were a lot more troubles than my rose-coloured glasses suggested.

Not even Ezio himself escaped the re-evaluation.

Ezio is still likeable, to a degree, but his roguish antics and lady-killing ways come off as a bit naff in 2022. He occupies a fairly standard role as the ‘edgy bad boy’ in this adventure, whose personality is guided largely by what was considered ‘cool’ at the time.

He’s not helped by a narrative where women are either scorned lovers, “whores”, or “harpies”.

Now, I’m not about to fault the game for that.

The reality is the game development scene and the audience of the late 2000s is vastly different when compared to ‘modern’ times. Audiences in 2022 are more diverse than ever, with pandemic-era lockdowns buoying video games as a form of entertainment for everyone.

Ten years isn’t a long time, but we’ve seen a massive change in cultural values and the so-called ‘norms’ in that time, and they’ve led to more awareness about how best to portray women and minority groups in video games.

Assassin’s Creed 2 is a product of an era where video games were largely marketed to men, created by men, and played by men. We can’t expect the games of a decade ago to reflect the cultural values and sensitivities of today.

In that regard, I can’t say I was surprised by Assassin’s Creed‘s flippancy towards women – although, I can say it stands in stark contrast to the games of today.

This statement rings true for much of the game, from its janky movement to its open world presentation.

Assassin’s Creed 2 remains a revolutionary game. It helped popularise the modern open world genre, and was the real catalyst for kickstarting the franchise, which continues more than a decade on.

At the time, it received well-earned accolades for featuring cutting-edge graphics, characters that felt realistic, and a narrative that pushed the argument that video games could be just as impactful as films and TV shows.

Playing the game in 2022 diminishes none of that – but it does prove just how far video games have come in a relatively short period.

Faces are no longer blocky and stiff, as in Assassin’s Creed 2. They don’t stare out with pale, unblinking eyes. Combat is smooth and flows freely. You certainly never climb a building, only for your character to accidentally leap off in the opposite direction whenever they feel like it.

Assassin’s Creed 2 was a stepping stone to this success – a triumph that did so much for modern video games that it’s hard to holistically evaluate its legacy. As a child, it was one of the first titles that really engaged me, and sparked a lifelong interest in video games that led me to my current career.

It’s a different beast in 2022, but it’s fair to say that’s the case for everyone, and everything. We all age, and Assassin’s Creed is no exception.

As a showcase for the games and technology of the late 2000s, Assassin’s Creed 2 is still stunning.

It spotlights Italy in stylish fashion, and features a vast open world where clouds roll past and clever guards roam the street in search of trouble. Collectibles are scattered around this world, but in a fashion that makes them feel achievable. They’re not just ‘filling the world’ for the sake of it, they exist for a purpose, and they’re a handy distraction from the game’s revenge-filled main quest.

And while the game does occasionally feel empty in contrast to more modern iterations of the open world, it strikes a better balance between ‘collecting’ and ‘playing’ than most subsequent titles. Here, collectible feathers support a narrative about Ezio learning to grieve his family. It’s not about hoarding, or covering the entire map – it’s about meaningful exploration, and spending your energy wisely.

It displays a shocking amount of restraint rarely found in modern games, which have taken the open world model and pushed it into the land of excess. What’s more often the case is that open world games feel stuffed with things to do, to the point where many players would prefer beelining the main quest and ignoring all that shiny excess.

Assassin’s Creed 2 encourages you to engage with the game consistently, exploring every part of its world on your daring, Italy-spanning quest. It’s never overbearing, and that’s why it’s great.

While much of Assassin’s Creed 2‘s presentation feels dated – it’s finally looking its age, even after the Ezio Collection gave it a spit polish – the bones of the game still hold up.

Moving across the rooftops of Italy is freeing, as is fighting a whole platoon of guards with just a hidden blade and a sword by your side. The game’s narrative is hearty – both personal and grand, and filled with an enduring charm.

Despite the occasional bug or frustrating movement that sends Ezio flying across the screen, it remains an iconic, influential game that’s well worth visiting or revisiting on modern consoles.

A copy of Assassin’s Creed 2: The Ezio Collection for Nintendo Switch was provided for the purposes of this review.