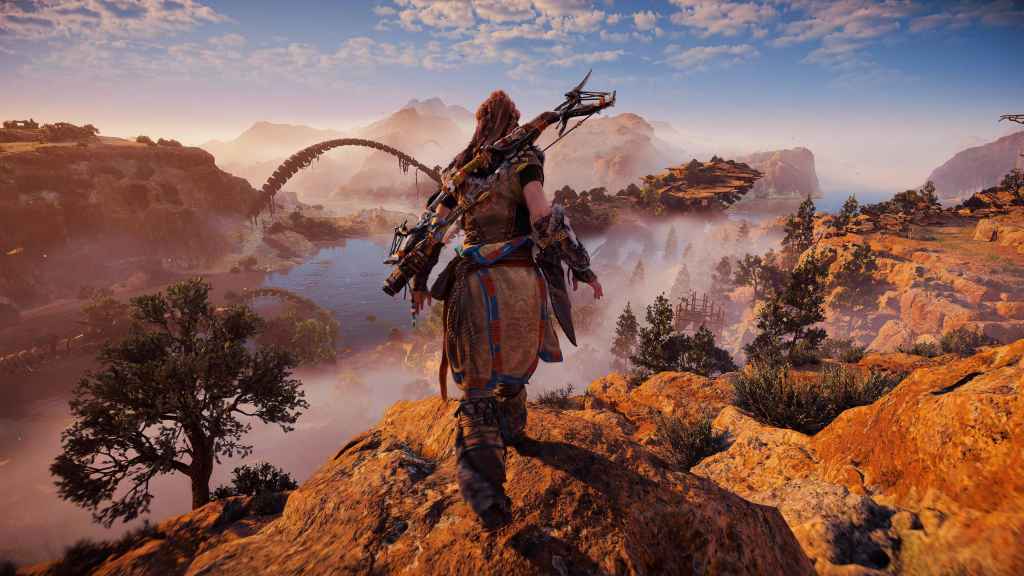 The sun rises in Horizon Forbidden West. It casts sweeping shadows across the land, limning trees in shades of brilliant red and gold. In the light, Aloy’s flame braids catch fire, glinting and twisting as she spins and leaps, drawing back her arrow with a strong flourish. Before her, a machine stands, its metallic armour reflecting the sun and casting lens flare into Aloy’s eyes. The scene is deadly, but beautiful – and brought to life with such stunning technical prowess that it feels lifelike.

Moments earlier, the Forbidden West had been quiet. A breeze had moved through the trees, ruffling perfect green leaves and brushing through each blade of thin, detailed grass. Earlier still, Aloy had spoken to a traveller on the road – a character whose skin shined with grease and sweat – whose mouth movements were so realistic I found myself briefly dazed, and wondering why they weren’t wearing a mask. This was a living, breathing human before me – not a computer-generated being. Why weren’t they wearing a mask?

The answer was pretty clear to my rational mind – they were, after all, a digital being – but the visuals of Horizon Forbidden West were so convincing, I briefly found myself forgetting what was real life.

There are moments where the game’s spell is broken – where an eye twitch or uncanny glitch nudged me back into the uncanny valley – Horizon Forbidden West remains an incredible feat of graphical and technical mastery, regardless of minor quirks.

And even beyond the shiny, sleek textures and shimmering god rays, Horizon Forbidden West shines. With a rich narrative, it bursts with life at every turn as Aloy fights for a better world, against all odds.

Combat is sleeker and the stakes feel higher. Aloy’s companions are multi-faceted and complex. The game’s world is also far more dangerous, more beautiful, and more deadly than previous adventures – making every move feel meaningful, and lending weight to every choice.

It’s a story that’s so easy to lose yourself in, when each moment is buoyed by a deep love and attention that’s clear in every pore, eye glisten and muscle clench.

It’s mind-boggling to see that technology has come this far – and as I traipsed, run and rode through Horizon Forbidden West’s gorgeous world, I found myself constantly repeating: I can’t believe games look this good now.

When Horizon Zero Dawn launched on PlayStation 4 in 2017, it was a revelation. The game’s particular version of a post-apocalypse, a machine-ridden world that nature had reclaimed, was beautiful. It was the pinnacle of video game graphics at the time, and when I played it, I wondered then how much further video games could reasonably advance in this way.

Horizon Forbidden West was quick to exceed any of the expectations I’d set, inviting me into a world that’s breathtaking in every way. From its opening chapters, the game stuns with the detail it packs into every part of its environment and world design.

Varl, a returning character Aloy reunites with early on, is phenomenally good-looking in Forbidden West, with his buoyant hair and impressively detailed character model. Here, his outfit is clearly held together by well-worn stitches and leather that appears to be shaped by hand. The feathers across his collar bounce and float with the wind, The lines on his forehead wrinkle with surprise, and his face paint cracks with every pained grimace.

But it’s his lips, and the lips of other Horizon Forbidden West characters, that mark the most impressive achievements in the game. While digital characters of the past have often been held back by stiff lip movement that immediately betrays their CG status, lips in Forbidden West move with a realistic grace.

They fold back against teeth, and stretch with every emotion. Characters take breaths, and the muscles in their faces pull and change shape.

It means that highly-sought-after ‘immersion’ is much easier to achieve. Every character in the game looks real – and with a well-told, thorough, and unique story backing every quest and journey, it means characters feel like they could cross the bridge into real life with ease.

The writing is on the wall

While it’s the game’s graphics that will likely captivate players from beginning to end, Forbidden West‘s writing and direction is just as impressive.

Where Horizon Zero Dawn often felt tonally rocky and unsure of its own lore, Horizon Forbidden West has a clear confidence in its world. Aloy is a more rounded character in the sequel, having been hardened by battles and the losses she endured. She often questions herself, and how her actions put others in danger, and eventually acknowledges that her victories only come with the help of other people.

Where she was initially a lone wolf, Horizon Forbidden West’s tale of strife, which begins as visitors from an advanced society begin wreaking havoc on Aloy’s world, allows her to grow and change as an individual. It means that while much of the action is focussed heavily on large-scale machine battles and conquering unique biomes, it’s also a very human story, of the value of teamwork and trust.

Aloy goes on a physical and mental journey in the game, discovering more about the society that birthed the apocalypse in which she lives, and how the GAIA program can reshape this world to drive back the advance of the deadly machines.

Forbidden West leans more heavily into this lore than its predecessor, and spends far more time in cloistered, robotic fortresses – but the narrative intricacies in this sequel are fascinating. I found myself wanting to spend more time in these areas, uncovering the pieces of worldbuilding that Zero Dawn seemed to shy away from.

The plot and characters are overall much sharper and more interesting than Zero Dawn. Even the side quests are fascinating, feeling like they’ve been given the same amount of attention and care as the game’s main plot.

Wander off the beaten path, and you find tales of desperation, anguish and horror. Every charater has a story, and looking into their vividly real eyes reveals exactly what they’ve seen. Every tale is worth hearing, and every person matters.

A new age for the humble video game

Combat has also vastly improved from Zero Dawn, and a number of special upgrades, moves and weapons give players a healthy variety of options on the battlefield. The visuals, again, play a huge part in these changes too – the witnessing the act of fighting feels incredibly naturalistic and believable.

Butterflies flap in the sky and pollinate buds. Trees whisper and shake as they’re disturbed by currents in the world, or by Aloy’s movements. It’s a world that’s alive in every way, as real as the characters that populate it. Even on the far corners of the map, the details sing.

Horizon Forbidden West’s world is huge, and the story takes you to every disparate nook, across fields, beaches and mountains. In every place, there’s people to save. Stories to hear. Resources to gather to craft your arrows and supplies.

There’s no shortage of beauty, and every pixel gleams.

While the vastness can occasionally feel overwhelming, it also gives Horizon Forbidden West a sense of wild freedom. There’s so much to see that it feels like a single playthrough couldn’t encompass it all – but somehow, it does.

From the river-filled plains of the game’s opening chapter, Horizon Forbidden West pulls players along on a breathtaking journey – one so lifelike and human it’s almost unbelievable just how good it really is.

Video games have come a long way in the last decade, even since the launch of Horizon Zero Dawn.

If this game is anything to go by, they still have a long and incredible future to come. As the first major title in a new wave of ‘next-gen’ games, Horizon Forbidden West makes one hell of an awesome impression.

The PlayStation 5 version of Horizon Forbidden West was provided and played for the purposes of this review.