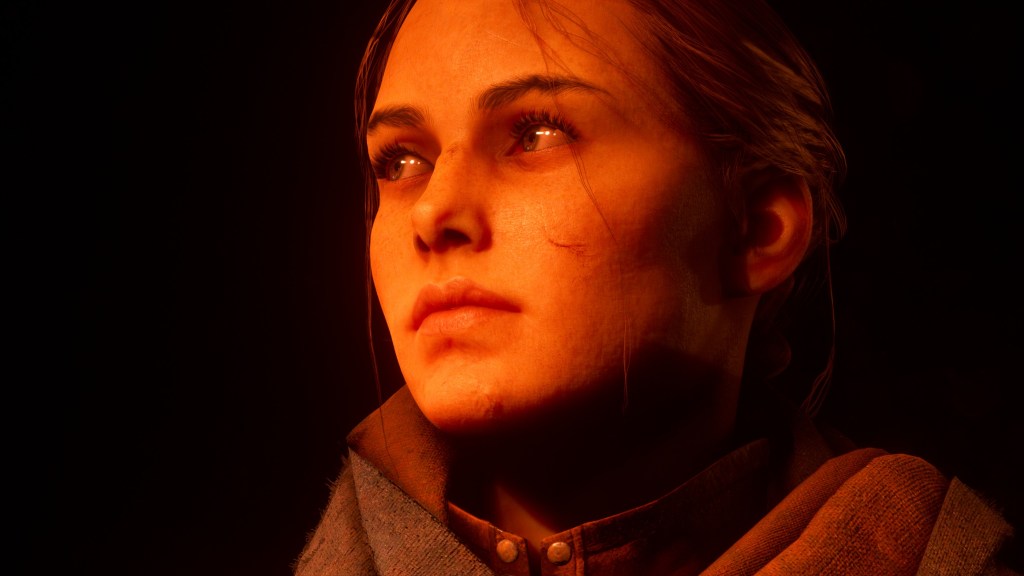 Three years after A Plague Tale: Innocence, Amicia and Hugo are back. In A Plague Tale: Requiem, the siblings hope to start a new life – far away from their devastated homeland, and the events that befell them there.

Set in 14th-century France, the single-player action-adventure portrays life amidst the Black Plague and Inquisition. It’s a grim reality. Yet, with Hugo’s curse now seemingly under control, the promise of life in a vibrant southern city spells a brighter future – or so it seems.

Once again bringing Amicia to life is young English actress Charlotte McBurney, who, along with Logan Hannan (Hugo), returns for the sequel. The pair are joined by Kit Connor (of Heartstopper fame) as Lucas, and Lucy Briggs-Owen as Beatrice.

A Plague Tale: Innocence was McBurney’s first-ever audition after signing with her agency, London’s Young Actors Theatre. The then sixteen-year-old was working as a nanny at the time, which she says was ‘good preparation’ for her role as the protective Amicia. McBurney had no preparation, however, for the world of video games.

‘I was asked in the recall whether I [played video games], and I think my face just froze. I was like, “Should I lie? Will I lose this job if I say no?”’, she recounts with a laugh. Fortunately, the Asobo Studio team didn’t count her unfamiliarity against her, and she was cast as the headstrong teen.

While McBurney admits she was a little thrown by receiving a video game audition as her first, she was ‘absolutely’ drawn to the narrative. ‘I loved that it was a story about siblings’, she reflects. ‘I also loved the youth of [Amicia’s] voice … It’s rare to see a child’s voice written that well.’

Having trained as a theatre actor – something she views as ‘such a good foundation’ – McBurney soon recognised the shifts in performance that needed to be made. ‘In theatre, your energy is dispersed over your whole body. [In voice-over] it’s entirely concentrated. That’s a lot of energy in one area,’ she describes, pointing to her larynx.

In some scenes, where ‘you’re only seeing the back of Amicia’s swinging plait’, McBurney couldn’t even rely on the physicality of her character’s body. Here, she realised she had to ‘kind of “overact” for it to read’.

The Londoner is quick to praise the support given to her by the Asobo team. ‘They really took the time to walk me through everything in Innocence’, she says. ‘The director, Mark [Healy], really coached me through.’ McBurney’s gratitude for this is apparent. And it meant signing on for the sequel was a no-brainer. ‘They know me so well now,’ she smiles. ‘[Requiem’s] script felt like it was written for my voice.’

In A Plague Tale: Requiem, six months have passed since the defeat of Grand Inquisitor Vitalis Bénévent and the Inquisition’s villainous plans. Careful not to divulge any spoilers, McBurney paints the second instalment as ‘aesthetically, much richer, but the tone is much darker.’

‘I was like, “Doesn’t anyone want a game about the six months where they were having a great time?”, and [Asobo] were like, “No, absolutely not”’, she laughs.

Once again, Amicia finds herself in some pretty high-stakes situations. To access the adrenaline required for these performances meant ‘a lot of running on the spot or really bad boxing movements’, she says, cringing slightly. ‘I’m absolutely not a boxer!’ For one particularly emotionally-charged scene, the studio lights were switched off so McBurney was in almost complete darkness. ‘It was like blinkers on a horse,’ she recalls.

Between setups, McBurney found respite in a somewhat incongruous form: knitting. ‘You can get a kind of whiplash, coming in and out of character,’ she explains. ‘So I would knit in breaks – I actually have the scarf on the back of my door’, McBurney smiles, turning to point to it. ‘It’s really ugly – the colours don’t go – but I was knitting for the sake of knitting, not for aesthetics.’

The young actress seems to embrace contrast. Case in point, she’s currently assistant directing an opera. ‘My CV looks weird’, she laughs again. McBurney expands on her divergent creative career, saying, ‘part of the excitement of being a freelancer is not knowing what’s next.’

Requiem’s release will mark yet another first for McBurney: Twitch streaming. ‘Anna Demetriou, who plays Sophia, is a Twitch streamer, so we’ve decided to play it through together.’ Ever eager, McBurney is ‘excited’ to give it a go. She isn’t confident, however, that her excitement will translate to skill. ‘It’s going to be complete public humiliation!’, she admits, her slight cringe returning.

Yet, no one can dispute McBurney’s vocal ability, and her advice to actors looking to enter the video game world is impassioned. ‘Do it!’, she enthuses. ‘I’d recommend it to anyone!’ ‘My number one tip is to be a magpie – listen to people’s voices and see if you can recreate them,’ she advises. ‘Get your phone, record yourself, and listen back.’

When asked what she hopes players take away from A Plague Tale: Requiem, McBurney offers two thoughts. ‘I don’t think this gives anything away, but you can choose to play the game stealthily, or more aggressively’, she says. ‘I hope people get to wrestle with the psychological aspect a bit more.’

And in the spirit of her appreciative nature, McBurney adds, ‘I hope also people see that the team have really listened to the fans, because they really have. Everyone has done an incredible job.’

A Plague Tale: Requiem is set for release on 18 October 2022 and will be available on Windows PC, PlayStation 5, Xbox Series X|S, and Nintendo Switch.