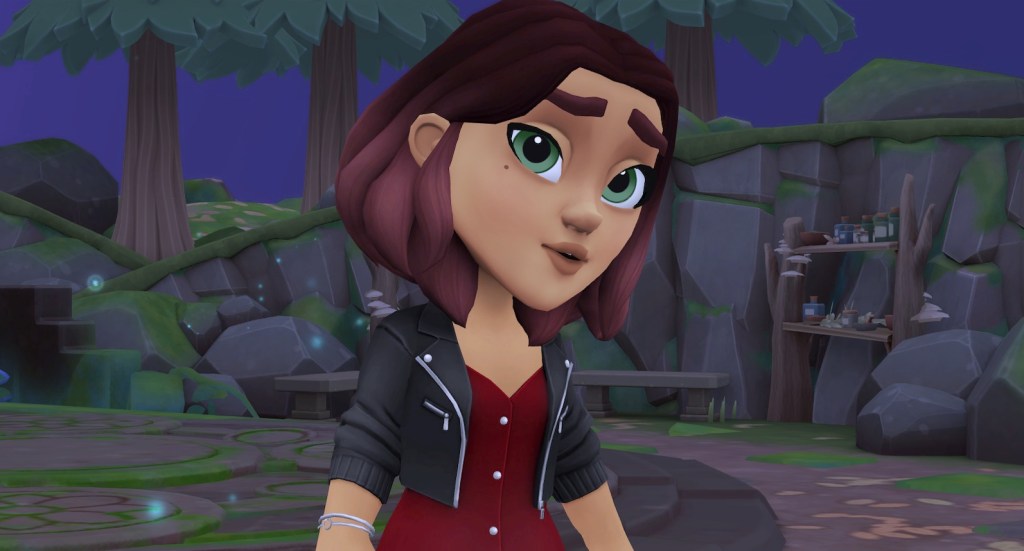 There’s a quiet part in all of us that longs to escape to the countryside – to a realm of fewer responsibilities, with a slower pace, and potentially some cute animals. It’s a quiet dream that most will never realise – but in Wylde Flowers, that reality comes alive. As in most farm simulators, this wholesome adventure kicks off with you moving from the city to a slow-moving farm town, filled with a range of loveable characters.

You are Tara, a young woman moving into her grandmother’s property to help with her farm as ageing catches up. But while the early stages of the game are concerned with growing crops, making friends, and rebuilding the failing town of Fairhaven, it isn’t long before you uncover Grandma Hazel’s real secret: she’s a witch, involved with a coven that meets in the Fairhaven woods.

The town, which is populated by some ‘normies’ and other hidden supernaturals, is suspicious of the witch coven, which makes you and your new pals outsiders – but by working through various tasks, building up your farm, and learning how to best use magic, you’ll be able to overcome these prejudices and create an idyllic life in Fairhaven.

Even in a flooded life simulator market, Wylde Flowers stands out, with a charm and personality that remains vivacious and lively as every day passes, and Tara’s list of tasks grows. Great care has been taken in the presentation of Fairhaven, and in every character that calls the locale home.

Rather than leaving players to make their own fun, as is often the case with life simulators, there’s imperative and purpose behind each step in this tale. Every NPC you met has their own story, too – as well as distinct personality, traits, tasks, friendship cycles, and secrets. They’re also fully voiced, which aids their presentation as fully-realised, well-rounded characters, rather than denizens to exploit for goods.

There’s the adorable Violet, who runs the flower shop. She’s extremely sweet, and helps Tara on her quest to grow more at the farmstead, and instructs on the magic of bees.

There’s Shelby, the quiet recluse who’s often found wandering in the woods, or sitting by the campfire.

There’s also hearthrob Kai, who runs the town’s knickknack store, and loves to surf. The more you interact with these folks, the more your relationships grow – with some characters even available for romance and marriage, once you put in the time and effort to really get to know them.

On the other hand, you’ve also got some ‘enemies’ in Fairhaven, like pig-headed mayor Otto, or deeply suspicious cult leader, Cameron. Both are relatively antagonistic forces in the town, and will need to be overcome before the story is over. Your town isn’t perfect, and that’s perfectly okay – the inner conflict and prejudice that exists on the outskirts of everyday life helps to drive Tara forward, and influences the lives of every character.

No two interactions with these NPCs are the same, making the gameplay loop in Wylde Flowers consistently fresh – it encourages you to chat to everyone, each day, learning more about their inner lives, and exactly how you can help them. That comes about via little tasks – re-establishing town features like the mines, gathering twigs or mushrooms – and also via chatting, and unlocking each character’s relationship hearts.

With a strong enough friendship, they’ll eventually reveal more secrets to you – or help to expand Fairhaven as a whole. It’s these relationships that push the action of Wylde Flowers beyond your standard life simulator. They make Fairhaven sing, and inject the game with a sense of homeliness and familiarity. You’ll certainly have NPCs you like more than others (Violet, Kai, Kim and Damon are wonderful) but each lends a personal and very real voice to Wylde Flowers – buoyed by the brilliant voice acting chops on show.

These characters also keep you hooked on every mystery and twist in the game – all of which pull you along the game’s hearty main story. You’re not just completing tasks to have them done, you’re also working your way towards discovering who is behind the town’s witchcraft epidemic, and which villagers are really on your side.

This mystery pervades every part of the story, and guides your daily tasks as you travel along your strange and magical road. In the early parts of the game, your tasks are mostly simple – gathering ingredients, planting crops, selling goods, fishing, and cooking. But the further you travel in your journey, the more your world will open up. Hours in, Wylde Flowers sends you spiralling down mine shafts, towards repairing cliffs and buildings on the far shore, and eventually towards discovering the real mysteries behind the witch cult, and why Fairhaven exists as it does.

The slow unravelling of this tale is delivered expertly, with each day filled by satisfying, simple tasks that are buoyed by a relaxed gameplay style.

Wylde Flowers was originally an Apple Arcade game designed for iPad and other touch devices, but this light gameplay style works equally well on PC. All you really need to do is lie back, click away, and you’ll watch Fairhaven coalesce at your fingertips, one axe swing at a time.

While this means the action is easy breezy, and that getting by is no more difficult than a tickle, it does free up brainpower to focus on the life simulator’s unfolding story and mellow action.

Wylde Flowers knows exactly what it wants to be, and is extremely good at stimulating those quieter parts of your brain – the parts that call out for a long country trip, or for an estranged uncle to pass on their ramshackle farm for care and maintenance. It’s a game that imbues you with a real sense of calm and longing – Fairhaven is so fully realised that it’s easy to feel nostalgic and sentimental about it, even after you close the game.

It’s a place you’ll long to return to.

Whether you’re spending your days fishing, building out your farm plot, collecting every magic spell, or digging to learn every one of Fairhaven’s dark and mysterious secrets, you’ll always uncover something satisfying – new activities, new collectibles, new scrolls, and even new heartbreaks.

The pace of the game means you’ll need to be patient to discover every narrative beat – events tend to roll out glacially, to give time to explore every activity and get settled into life in Fairhaven – but this also injects every day with a sense of possibility. A single day may yield only a new fish or two, or potentially a new, unlockable locale, or it might just change the course of Tara’s life forever.

That unpredictability will keep you searching onwards, with hope in your eyes, and a fishing pole or axe in your hand.

In Wylde Flowers, the days clip past at speed, revealing more with every sunrise. For anyone who’s dreamed of moving to the country, starting their own farm, or just having more time in every day, it’s a balm for the soul; a game where you can live out your dreams in a sandbox of colour, mystery, and wholesomeness. One day, you just might end up in the countryside, breathing the smells of overturned soil and manure – but until then, there’s always Wylde Flowers.

The PC version of Wylde Flowers was provided and played for the purposes of this review.