Sadly howl at the moon, wee on the floor, and tear your furniture to pieces with this nifty game pack.
Leah J. Williams 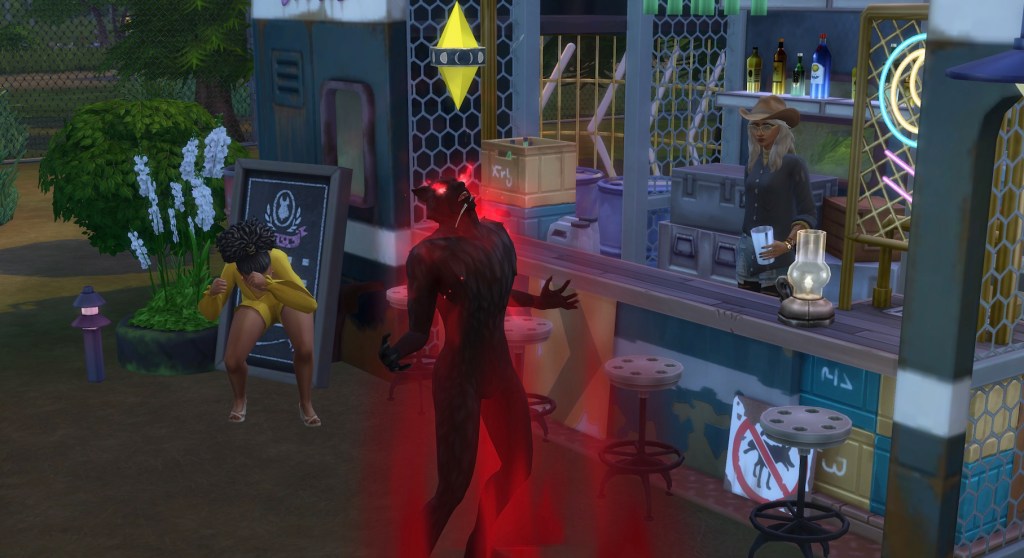 The Sims 4: Werewolves was a game pack long in the making – one that became even more tantalising the longer it took to announce. While werewolves had been a huge part of The Sims 2 and The Sims 3 (in the Pets and Supernatural expansion packs, respectively), the more ‘realistic’ focus of The Sims 4 meant they’d largely fallen by the wayside over the last decade. Now, they’re back – and they’re bigger, furrier, and more fun than they’ve ever been.

Werewolves introduces Sims players to the town of Moonwood Mill, a semi-rural locale dominated by two opposing werewolf factions: the traditional Moonwood Collective, and the rebellious Wildfangs. Each has their own culture and customs, but they share a dislike for each other, revealed in snippets of dialogue and unique, lore-based interactions.

Your Sims can choose to become werewolves themselves in this pack, or spend time researching the lore of Moonwood Mill to discover exactly how the town was established, and what beef the werewolves have. While this lore is dense and intriguing enough to stand on its own, you’ll get the most out of the pack by jumping in and claiming the ‘Cursed Bite’ for yourself.

It’s easy enough to become a werewolf – my chosen victim, ‘Trent Gnorkum’, a beach bro who loves to tan, simply made friends with werewolf elder Kristopher Volkov (who mostly roams around the Moonwood Mill Library area) and asked for a little nip.

While it took some coaxing (spamming the ‘Get to Know’ friendly interaction), Trent was finally accepted and underwent the slow process of metamorphosis – one that did require minor tweaking in Create-A-Sim. With some particular heads and body shapes, the wolves of this pack can look a little too much like ‘furries’ (people wearing animal suits) rather than actual werewolves. That said, the customisation is hearty enough that you can effectively avoid the uncanny valley by playing around with sliders and colours.

The werewolf transformation in the game works largely like the vampire transformation. Sims are bitten, and then over the course of a few days, slowly succumb to their curse and adopt a Beast Form. While vampires tend to be fairly controlled, werewolves are completely different – their first transformation is chaotic, and leads to players losing control of their Sim.

The only interactions you can perform during the first transformation are running and digging, with newbie werewolf Sims largely left on their own to destroy furniture and rampage around a particular area. Anyone who sees them will cower in fear – and any vampires in the area will immediately gain dislike for these werewolves.

After the first transformation, they end up passing out and waking on the peak of a high mountain in Moonwood Mill, where they gain their first werewolf temperament, based on their personality. In my case, Trent immediately gained a dislike of being indoors for too long, which was later compounded by a temperament that meant he gained more Fury while indoors.

‘Fury’ is a new feature introduced in the Werewolves game pack – and it’s what makes ‘werewolf’ such a unique life state in the game. Every werewolf Sim gets a Fury metre when they transition, and this is an indicator of raw emotion that builds up over time. When a Fury metre is full, werewolf Sims go on a rampage, tearing furniture, peeing on the floor, and generally being a menace.

Read: Everything you need to know about The Sims 4: Werewolves

If you’re not prepared, they can rack up thousands of dollars of damage, and destroy half their home. But while this is an annoyance, since fury can build easily and without players noticing, it also provides an interesting layer of challenge to the action of Werewolves – the longer a Sim is a werewolf, the more they can take charge of their Beast Form.

Each tier in the werewolf life state allows Sims to claw back some measure of control, with abilities like the ‘Sombre Howl’ allowing Sims to reduce their Fury metre, and others allowing Sims to exert control over their rampages. Eventually, players will unlock the full suite of werewolf abilities, which can allow immortality – or just a semblance of control over their alternate forms.

It’s a neat twist on the Supernatural Sim formula, and gives a sense of progression to the life state. It also allows your Sims to build up their strengths, and eventually enter into an all-out culture war against the vampires, if they wish.

The werewolves and vampires in the game have a long history – and it seems vampires will immediately hate werewolf Sims on sight. Once their hatred reaches a particular level (Caleb Vatore leapt straight to 50% negative relationship when he met Trent), you can initiate a new interaction: Supernatural Showdown. This initiates a flashy, cinematic fight between a vampire and a werewolf – one that everyone stops to watch in terror.

It’s a minor addition in the game pack, but one that really builds out the pack’s lore and sense of story. While the narrative here is fairly piecemeal – you’ll need to find it by digging, researching, and chatting to werewolves – it’s a lovely touch that makes the world of The Sims 4 seem much grander.

Beyond the actual werewolf transformation, there’s a number of other significant additions in this game pack. There’s cool, ragged hairstyles, wood-y furniture items, plenty of rustic decorations, new characters, new interactions, and flashy, streetwear-style clothes available. While the draw is the new werewolf life state and transformation-based abilities, the entire aesthetic of Moonwood Mill is fantastic, and the town provides some gorgeous new hangout spots for everyone.

Integration with existing packs like Vampires is an added bonus, but Werewolves effectively stands on its own as furry good fun – and a fantastic addition to the supernatural world of The Sims 4. With a well-designed progression system and new abilities worth nabbing, it’s a game pack that earns a hearty howl at the moon.

The PC version of The Sims 4: Werewolves was played for the purposes of this review.