Sonic Frontiers review – A speed bump in the road

Sonic Frontiers is a mishmash of odd ideas – although the freedom and speed of its traversal are a joy.
Leah J. Williams 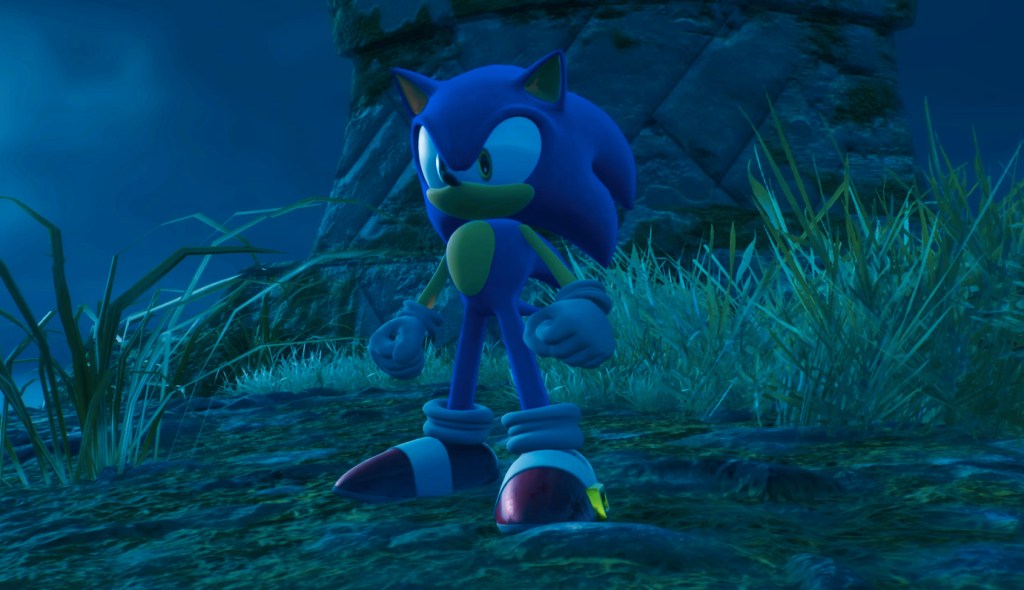 Sonic Frontiers is not The Legend of Zelda: Breath of the Wild. Not by any stretch of the imagination. You’d be forgiven for thinking otherwise; with its sweeping forest plains, sandy desert landscapes and lush mountains, it certainly evokes the feeling of freedom and exploration that Breath of the Wild brought. But even in the first steps into the world of Frontiers, it becomes clear this game is an entirely different, far more unwieldy beast.

Sonic Frontiers may aim for Breath of the Wild somewhat, but it shoots off in another direction entirely – rather like Sonic, while you’re trying to corral him through various boss battles, platforming levels, environmental puzzles, and starry nights filled with random slot machines. This isn’t a game that prioritises finesse in any sense of the word. Not through its traversal, nor its battles, or its rickety plot.

Somehow, despite its wild mishmash of cross-genre ideas, it remains compelling. Its brightest ideas shine through the muck, although they leave Sonic Frontiers feeling like a game of multiple personalities. A game buoyed by ambition and a clear love for the world of Sonic, but held back by strange choices and a rocky open world that too often feels bare.

Sonic Frontiers is three games, all at once

What becomes abundantly clear mere moments into Sonic Frontiers is that it doesn’t know exactly what it wants to be. It feels like it’s aiming to innovate for the future of the Sonic franchise, while paying homage to the past. But in that balancing act, Frontiers splits itself in unflattering ways.

You kick off the adventure in haphazard fashion. A brief and mysterious cutscene between Sonic and his pals quickly devolves into a high-speed sojourn in a 3D Sonic ’06-like platformer course. There is little context provided for this jaunt, or for why it immediately leads the Sonic squad to cross inter-dimensional borders and wind up in a strange new land.

With little aplomb, you’re thrown into a wide open world – Kronos Island – and tasked with retrieving a bunch of tokens to help revive Amy (the first of your scattered friends). Along the way, you meet the strange Koco creatures which are spread throughout the ‘open zone’ worlds of the game (four realms in total), and take your first steps along strangely placed loops, jumps, and dips that dot the landscape.

Exploration is largely freeform, and it’s here where the game makes its mark. Sonic Frontiers is made up of multiple, small open worlds – each of them populated by puzzles, speed enhancing structures, quests to complete, and items to collect. The cloistered nature of each world means collectibles are achievable, and that you can spend joyful hours wandering and completing tasks.

There’s only a loose story holding the events of Sonic Frontiers together, which leaves each world open and at your whim. If you choose to hunt down each and every token in the game, you’ll spend your time jumping along strangely placed rails, romping across caverns and great abysses, and being sent spinning in all directions.

The sense of speed in the game is fantastic, and you can build up to hair-raising levels as you jump through hoops and run across desert plains. The more Kocos you help, the more you’ll advance this speed too, making the later stages of the game a high-speed thrill.

As you traverse the lands, you can also devote time to a variety of environmental puzzles, which unlock portions of visibility on the world map. The instructions for these are minimal – much like Breath of the Wild – and require some deciphering on your part. Some simply require you to use a spinning loop, others might need you to jump on stones in a set order. There’s also a Tetris-like puzzle, speed-based traversal puzzles, combat scenarios, and a variety of other puzzle mechanisms.

While some are straightforward, others are rather clever; requiring you to investigate your environment, pick up clues along the ground, and initiate a trial-and-error process. That said, there are also some puzzles that frankly feel impossible, and could do with a little more player guidance – which reflects a wider issue in the game.

In leaning towards a minimalist approach to gameplay, Sonic Frontiers tends to leave out a lot of necessary information. From story to puzzles to large-scale boss fights, Frontiers takes a hands-off approach – it doesn’t really explain where Sonic is, why anything is happening, what you’re doing, how to save your friends, or even how to take on major bosses.

The First Titan boss fight against Giganto, for example, is an exercise in frustration. A single line of instruction early in the fight encourages you to use your parry against the beast, but doesn’t explain that your regular melee attacks do nothing – it’s left up to you to figure it out, with tears and thrown controllers along the way.

If this combat strategy made sense, the Giganto fight would feel like an epic success – but with so little context, and with only vague, unhelpful tips along the way, it leaves you feeling like something is missing. The pounding, metal soundtrack – fashioned to be cool and edgy, no doubt – also leaves you more than frazzled, confusing the boss fight even further.

The second boss fight is similar – little instruction leads to major frustration as the game pairs counter-attack and parry combat cycles with quicktime events (QTEs) that catch you by surprise, and can instantly end a battle that already takes around 15-20 minutes to complete.

When you die, you start from the beginning. In most of the game’s boss fights, that means starting all over again, again and again until you work out the ‘trick’ to the fight. Around halfway through the game, this process began to grate so much that I found my gut churning at the thought of the next boss waiting around the corner.

While the puzzle and exploration cycles had their joys, the thought of yet another annoying, finicky boss was like a shadow that overhung the entire game. There are plenty of good choices in Sonic Frontiers. The game’s puzzling, exploration, and bouncy combat make for an excellent time. But equally, there are just as many baffling, odd decisions along the way.

The highs and lows of Sonic Frontiers

Having such prescriptive, one-note bosses in a game with a focus on freedom is one thing. But there are countless bizarre choices even beyond this. For example, on random nights in Sonic’s world, stars begin to fall from the sky, and this initiates a slot machine mini-game that encourages you to collect stars to keep the slots rolling.

Why does this happen? The game never really explains it – the slot machine simply appears, and you’re forced into taking on a weird little meta mini-game that takes up a massive proportion of the screen.

It’s not the only disruptive force in Sonic’s exploration world; the game is also littered with mini-bosses that can trap you in dome combat if you so much as blink in their direction. Stray too close to an enemy, and it’ll immediately come after you, forcing you into largely unavoidable combat. Even if you put a boss away for good, it will always return – I spent my time on the game’s second island contending with a rather enthusiastic shark boss that just would not go away. Every time I beat it, it found me elsewhere in the desert sand, and forced me to hop onto its tail.

These questionable decisions extend to the core gameplay loop. As mentioned, you can spend your time in Sonic Frontiers running around a colourful sandbox world, solving puzzles and frittering your time away on fun challenges. But if you want to advance the main story, you’ll be forced into linear progression – travel here, meet a friend, grab a chaos emerald, unlock a linear platforming level, collect tokens, repeat.

Sonic Frontiers wants you to try a bit of everything. And while some portions shine, parts of the game also suck tremendously, including those aforementioned platforming levels.

These range in difficulty, but the majority are frankly a bit broken. The best of them emulate the brilliant high speed and traversal of classic Sonic games, with plenty of shortcuts and tricks to pull off for wily players. The worst of these levels feature textures you can fall through, floors that lack the ‘stickiness’ to keep Sonic grounded, and high speeds that Frontiers feels ill-equipped to handle.

Sonic’s whole motto is about going fast, right? Well, if you go too fast in these levels, the game will simply shoot you off-screen, into the far distance, wherever it feels like it. Run at a ramp at slightly the wrong angle, and you’ll fly off, and fail the level. Objects that look like they can be bounced on will often fail you, as will your sense of depth perception.

While these levels are extremely pretty, and feature some good platforming ideas, their lack of finesse means they’re not engaging, or even fun at all. Completing these levels requires dedication and multiple tries, but the end result – a handful of keys, which can also be found on the battlefield – feels lacklustre for the amount of annoyance they cause.

They’re a major contributing factor to the highs and lows of playing Sonic Frontiers.

As much as you can build a sense of peace and satisfaction from breezing through each of the game’s worlds, it’s also a game very good at grounding you in a sense of malaise. The excitement of advancing through worlds is quickly dampened by the thought of the next unfair boss or platforming level around the corner, and this sense of dread soaks the later half of the game.

It means that while you’re having fun running around on hoops on pulleys, you’re constantly thinking about the terrifying next steps. Thoughts of Titans and platforming haunt your every step, reminding you of the darkest parts of this game – and that your time in the sun will only last so long.

There’s a real tonal dissonance in Sonic Frontiers. It wants to be a fun platformer. It wants to be a high-speed exploration puzzler. It also wants you to feel a sense of power as you take on towering bosses, and save a world from certain destruction. But in striving for success on multiple fronts, it achieves none of these goals – instead arriving as an ambitious but lukewarm adventure-platformer pockmarked by deflating choices.

The PlayStation 5 version of Sonic Frontiers was provided and played for the purposes of this review. GamesHub has affiliate partnerships. These do not influence editorial content. GamesHub may earn a small percentage of commission for products purchased via affiliate links.