Mothmen 1966 is a spooky adventure buoyed by excellent writing, but sunk by its own chaos.
Leah J. Williams 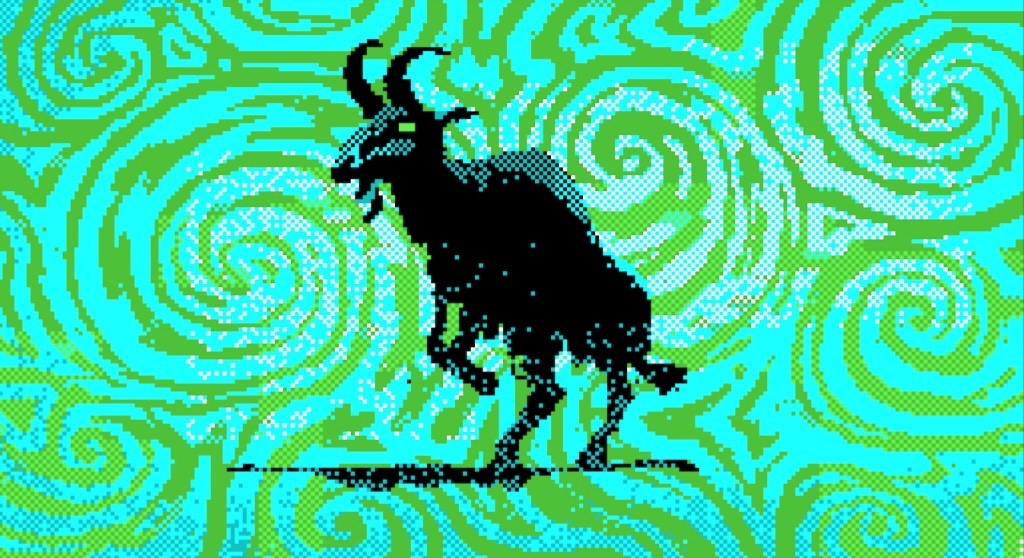 On the night of 15 November 1966, two couples driving in Point Pleasant, West Virginia were seemingly assaulted by a strange creature with glowing red eyes, and a wingspan of ten feet. Described as a ‘large flying man’, this beast was later spotted by several other residents in the same city, with all noting glowing red eyes and a massive wingspan, far larger than any bird. This beast would come to be known as Mothman – a creature that would garner its own mythos as a portent of doom for anyone who saw it. In Mothmen 1966, this mythos is expanded, in a ‘Pixel Pulp’ adventure game fashioned with the rudimentary computer graphics of the 1980s.

Mothmen 1966 weaves a new tale of Mothman terror, with the action following three unique characters: Holt, a gas station attendant, Lee, a school jock, and Victoria, a young woman dating Lee. All three live in a Point Pleasant-esque town soon to be at the mercy of a whole flock of Mothmen, over the course of a devastating, gothic night.

Holt starts the melancholy tale, stacking food cans at the local petrol station. This plays out in a pixellated mini-game where cans are swapped in slow, dialogue-driven moves – with ambient noise replicating the low buzz of the night. Crickets sound, trees sway, and the lights overhead hum.

This peace is interrupted by the arrival of the Men in Black – the mythical group of government agents alleged to be behind major cover-ups across the globe. They question Holt, and speak of a dream about his grandmother. In the dream, she runs through the woods wielding a shotgun, as a strange beast approaches.

The dialogue and imagery used are incredibly surreal – with close-ups and clipped sentences used to abstract the conversation and amp up the weirdness. The Men in Black are rendered as odd and misshapen, with blank, sunglass-wearing faces staring back at Holt. The soundscape also aids this strangeness; beyond the hum of the petrol station, each piece of sharp, forward dialogue is punctuated by a disturbing electronic buzz.

When the Men in Black leave, the second chapter picks up with Lee and Victoria, who are on a dark car ride to see the Leonid meteor shower. Lee is a typical jock, cajoling Victoria and promising the ride of her life. Victoria is reserved, and contemplates her future with Lee in clipped, gorgeous pieces of dialogue. As with Holt, their individual journeys are quite introspective, with each feeling like a full, rounded character despite the textual limitations of the game.

What follows is a bizarre mini-game sequence where Lee and Victoria are confronted by wolves. There is only one linear path to survival – with a wrong move being greeted by a death screen, and a chilling, electronic tune. It’s one of few instances in the game that requires active player input – much of the action revolves around simple dialogue – but it also feels quite stiff. There’s a particular order you must input to get through the encounter, and anything else will lead to certain death.

This is one of the major issues with Mothmen 1966 – that while it feels unique and uncanny, it remains fairly linear, with character choice and dialogue meaning little. In the absence of active play input, the game leans heavily on its weirdness to move the game’s plot forward. While this certainly works within the game’s compelling first arcs, it loses power over the course of the narrative.

Mothmen 1966 is a love letter to early gaming graphics, and an era when narrative simplicity was a need, rather than an experimental choice. While this is limiting – both for the nature of the story and the mini-games included – clever design masks much of this challenge. By employing a limited, compressed soundscape alongside a minimalist pixel aesthetic, the game effectively ramps up its horror, and generates a visceral reaction to every twitch, crackle, and beep.

There’s an unsettling feeling that plagues Mothmen 1966, one buoyed by this soundscape, and the deep surrealism of its pixel action. Faces don’t quite seem right – and the simple colour palette emphasises just how strange and unsettling the game’s events are. There’s a Lynchian sensibility in the game’s atmospheric style – one that leans heavily into absurdism, to mostly great effect.

While the setting is largely controlled throughout the game’s unfolding tale, the narrative ultimately tends towards outright chaos as the Mothmen take their stand, and the game’s narrative threads unravel at speed.

Given the game is so heavily reliant on measured, well-paced dialogue, this final act is an oddity. The game’s action is extremely reductive in its closing stages, with the ‘solved’ mystery at the heart of the game feeling clumsy, and driven by naff, over-explanatory dialogue. A post-credits scene helps to amp up the intrigue and horror of the tale, but it’s just as odd as the entire final arc.

The fumble at the end is largely a disappointment because of everything that comes before it – a ripe setup, deliciously-built tension, and plenty of creepiness. Mothmen 1966 starts off with an excellent pace, beautifully told in both dialogue and visuals with characters that feel real, but the lack of satisfying pay-off and the slow devolution of the game’s plot leaves you wanting much, much more by the end.

The PC version of Mothmen 1966 was provided and played for the purposes of this review.