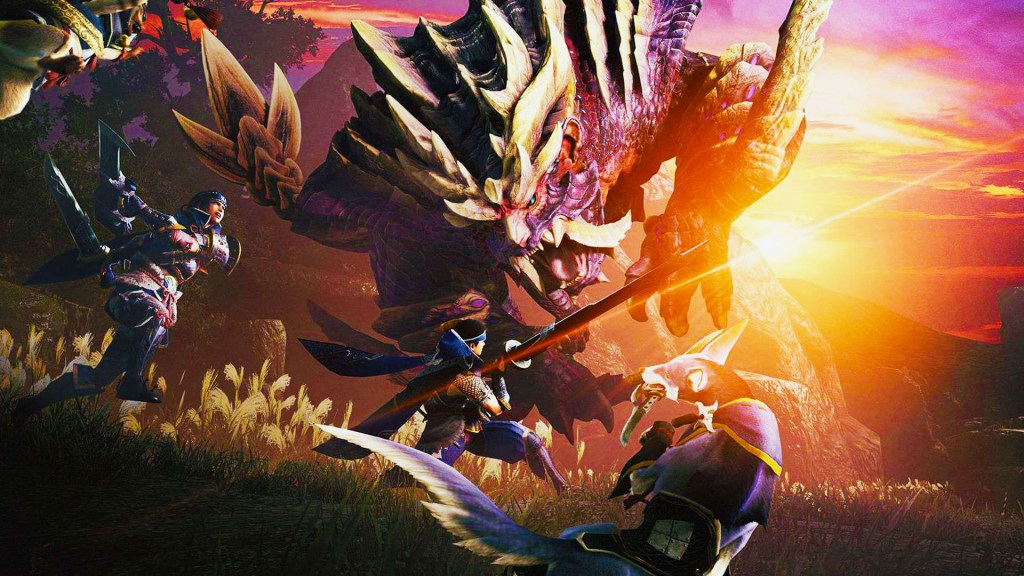 The core tenet of Monster Hunter is mastery through iteration – the evolution of your own skill by repeatedly pitting yourself against giant monsters, gradually overcoming their raw power with practice and refinement, and then making them into a shiny pair of new boots. Through time, effort and repetition, you’ll go from a messy but inspired rookie, to a refined expert in the field of monster hunting. Monster Hunter Rise was that messy but inspired rookie, a good game that suffered from a staggered release and a lack of end-game challenge. But with the coming of Monster Hunter Rise: Sunbreak, the flaws of Rise have been polished away, leaving an experience that can proudly stand shoulder-to-shoulder with existing entries like Iceborne and Generations Ultimate as a paragon of the Monster Hunter franchise.

Sunbreak follows a consistent pattern in Monster Hunter series releases; it’s the ‘Master Rank’ expansion that doubles down on, and refines the systems, introduced in the base game. The frenetic Wirebug-powered combat of Rise has been perfected in Sunbreak, with new Switch Skills that expand (and in some cases transform) the potential of every weapon, as well as a Skill Swap system that lets you adapt to new challenges by mixing in different Switch Skills in the middle of any hunt.

Rise up to Master Rank

As a ‘Master Rank’ expansion, Sunbreak aims to take the base game of Rise and turn it up to 11. The gear is stronger, the rewards are greater, and the monsters are deadlier than ever. This boost to challenge might be more important than ever before in Monster Hunter, because by the time the post-launch content for Monster Hunter Rise had wound down in preparation for Sunbreak, it was clear that a few issues simply wouldn’t be addressed until the expansion arrived. The end-game content was lacking in variety, and the challenge necessary to sustain the pursuit of long-term mastery simply wasn’t present.

In preparation for my time with Sunbreak, I replayed the entirety of Monster Hunter Rise, and didn’t fail a single quest. I say this not to brag (Alatreon and Fatalis thoroughly decimated my ego years ago in Monster Hunter World: Iceborne), but rather to highlight that for Monster Hunter veterans, Rise didn’t provide the level of challenge necessary to sustain the mastery pursuit, or the theory-crafting of new builds and strategies.

Thankfully, Sunbreak has taken numerous steps to boost the challenge, and I’m pleased to say that I was dragged back to camp beaten and bloodied multiple times in my ascent through the Master Ranks. Monsters are generally faster, responding more fluidly to the player’s use of the Wirebug system (a tool that trivialised numerous fights in Rise), and most have acquired new attacks that can better punish player errors. These additions help to enforce a larger emphasis on learning the fights, rather than simply bouncing back and overwhelming the monsters with raw speed.

The star-studded roster of monsters present in Sunbreak is fantastic, with some returning flagship favourites like Gore Magala and Astalos, as well as a whole host of new additions. The horror-inspired Three Lords are some of the best new designs seen in a while, with Garangolm (Frankenstein’s monster), Lunagaron (a werewolf) and Malzeno (Dracula’s fursona) well-prepared to beat you down in gothic style. While I won’t reveal much about the final monster of the story, I will say that it’s a perfect capstone to the whole experience.

The story itself is about as interesting as Monster Hunter stories ever are (that is to say, not very), but it deserves praise for being competently written, populated by genuinely likeable characters, and absent of any painfully tedious story quests. Travelling beyond the bounds of Kamura village to the new hub of Elgado is an exciting visual shift at the very least, as the Kingdom boasts a more medieval European aesthetic, fairly uncommon for Monster Hunter.

Oddly, the feature that invested me most heavily into the world and its characters was not the main storyline, but the new system of Follower quests. For those unwilling or unable to play with other people online, the Follower quests allow you to experience single-player cooperative play, venturing forth with NPC companions from both Kamura and Elgado, to hunt down monsters in pseudo co-op.

The NPCs you bring along have banter that ties into their own relationships with one another, and while it isn’t particularly extensive from what I experienced, I actually found myself growing somewhat attached to them. I’m hopeful that the post-launch content for Sunbreak will include more of these Follower quests, and perhaps the opportunity to hunt with some characters not yet available to take on as companions.

Perhaps most importantly for Monster Hunter Rise: Sunbreak, the end-game content is gloriously varied and exciting. Once again, we’re on the hunt for new talismans with combinations of skills and decoration slots that allow for wild and wacky builds, and this time, it’s much harder to optimise the fun out of the system.

In Rise, talisman farming for many took the form of hunting Narwa ad nauseam for her materials, the most valuable talisman crafting reagents available. This time, Capcom has concocted the brilliant new ‘Anomaly Quest’ system, similar in some ways to the Tempered / Arch-tempered system of Monster Hunter World. Afflicted monsters of all kinds have their damage, health and movesets boosted to brutal heights and can be pursued for materials necessary to craft end-game weapons, with excess materials destined for talisman crafting.

Rather than only limiting hunters to the highest echelon of monsters, everything from the lowliest Arzuros to the deadliest Nargacuga can now be end-game relevant, and a worthwhile use of your time. While there isn’t a guarantee that the highest tier of monsters will be included in this advanced hunting system, I’d be shocked if we don’t eventually see Afflicted Elder Dragons included in post-launch content. The idea of an Afflicted Valstrax both terrifies and thrills me, and it’s that kind of potential challenge that inspires the Monster Hunter community to keep playing for the long term.

Mastery through iteration – a refinement of gameplay and design that has been built over 18 years of the franchise – has ensured that Monster Hunter Rise: Sunbreak is phenomenal. The unique ideas that worked in Monster Hunter Rise have been finely honed, and the end-game now has the content it was sorely lacking. With a rock-solid foundation and a roadmap of promising post-launch additions on the horizon, Sunbreak is quite simply an excellent Monster Hunter expansion.

The PC version of Monster Hunter Rise: Sunbreak was provided and played for the purposes of this review.