Monster Hunter Rise makes big changes to the series' usual, methodical style of play, and the PC version is the best way to experience it.
Percy Ranson 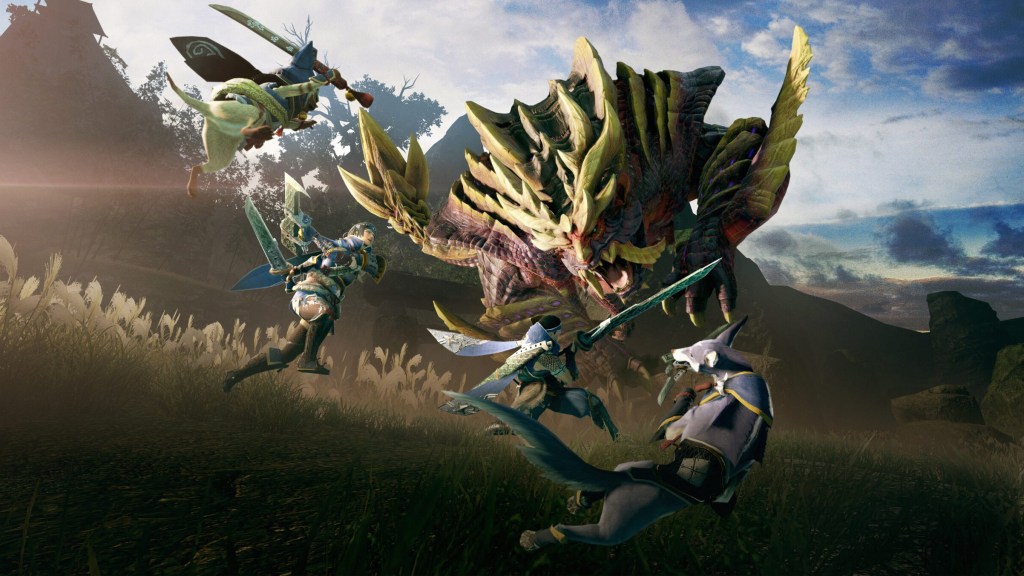 Monster Hunter Rise was a wonderful, albeit somewhat unfinished game when it launched for Nintendo Switch in 2021. It featured some of the highly successful improvements of Monster Hunter World, with a closer adherence to the setting and formula of earlier Monster Hunter titles.

But significant sections of the end-game, such as Elder Dragon hunts, weren’t available on launch, and the main story was left unresolved until patch 3.0 hit at the end of May 2021. Monster Hunter Rise on Switch felt more like an Early Access release until those updates were finally implemented.

Now that Rise has been released on PC, I’ve finally had the chance to play it through from beginning to end, in one seamless experience. This is how Monster Hunter Rise should be played, and it leaves the initial release feeling even more unusual in hindsight.

As a Switch game ported to PC, Monster Hunter Rise runs beautifully, with all of the additions you’d want in a console port. Full control remapping, a wide array of graphical settings, the capacity to play with a controller, or a keyboard and mouse – the full package is here and functions seamlessly.

But Rise pulls off the core tenets of the series well – hunting down your enormous prey, crafting equipment from their remains, and repeating that process. The roster of monsters include a healthy mix of returning favourites, as well as some exciting new additions that I certainly hope will return in games to come.

Rise maintains the changes that World implemented to the armour skills system, with individual skill ranking offering incremental bonuses rather than the threshold system of the past, allowing for easy mixing and matching and great build diversity.

The pseudo-tower defence ‘Rampage’ quests, the rideable monsters, and the Palamute (your new dog companion) are also fun additions, but are ultimately not overly impactful to the core formula of Monster Hunter.

Changing up the fight

More significant are the changes Rise makes to the difficulty of the series. A common critique that came in the wake of Monster Hunter Rise is that the game is easy in comparison to other entries in the Monster Hunter series. There is certainly truth to this observation – monsters do not offer the same sense of potential danger as they have in the past, and combat is far more forgiving of mistakes.

The primary cause of this is the Wirebug, perhaps the most impactful of all the additions to Monster Hunter Rise. Traditionally, the Monster Hunter games have been geared towards grounded, methodical combat.

Weapons like the Greatsword, Heavy Bowgun and Switch-Axe are often slow and tactically demanding, requiring an understanding of the opposing monster’s behaviour and moveset in order to evade attacks and ensure that your own strikes make it through large hit-boxes. Even the faster weapons like the Dual Blades or Insect Glaive rely on a level of anticipation and prediction to avoid being sent pinwheeling across the ground.

You are tactical and persistent, while the monsters are powerful and physically disruptive, and you have to play to these strengths if you don’t want to become swiftly and repeatedly introduced to the ground, walls and sky of the local environment.

The Wirebug changes this dramatically. It’s a swiftly replenishing charge-based resource, allowing you to launch yourself into the air or unleash unique, weapon-specific skills. It allows you to swiftly reposition in combat, or instantly recover after being hit. If you’re sent flying by an attack, simply activate your Wirebug to launch yourself directly back into the action, with no time lost to rolling across the ground and pushing yourself back up.

If a monster is juggling you in the air, the Wirebug will whisk you away to a safer place where you can have a quick chug of a Mega Potion. Tigrex charging you down? Wirebug. Bazelgeuse on a bombing run? Wirebug. Kushala Daora stun-locking you with… well, you get the idea.

The Wirebug is an exhilarating addition to combat, but it almost completely changes the pace of the game. It’s a double-edged sword – while the Wirebug smoothes over the frustrating edges of combat by minimising player downtime, the game also experiences a remarkable tonal shift because of it.

Monsters feel less imposing, their attacks less impactful when you’re given a mobility tool this powerful. You’re no longer at the relative mercy of your enemy until you learn its patterns and behaviour, because you can bounce back from virtually anything.

Having experienced Monster Hunter combat without the Wirebug, I cannot overstate how significantly this single mechanic changes the way the game is played. If you’re looking for a similar hunting experience to Monster Hunter World or prior entries, elements of it can be found in Monster Hunter Rise. But the game has been built with the Wirebug in mind, and combat ultimately revolves around your usage of it.

When considering the PC version of Rise, it’s hard not to compare it directly to the as-yet unmatched juggernaut that is Monster Hunter World – a competition that I don’t think Rise wins. That said, Monster Hunter Rise is still an enjoyable, well-crafted game with some compelling innovations that make it a wonderful addition to the Monster Hunter franchise.

Plus, you can make a fire-breathing T-Rex suplex a dragon. If that doesn’t persuade you, nothing will.

The PC version of Monster Hunter Rise was purchased and played for the purpose of this review.