How to Say Goodbye review – A marvellous, puzzlesome journey

How to Say Goodbye is a gentle, artistic, and comforting interpretation of what happens after a loved one passes away: conveyor belt puzzles.
Meghann O'Neill 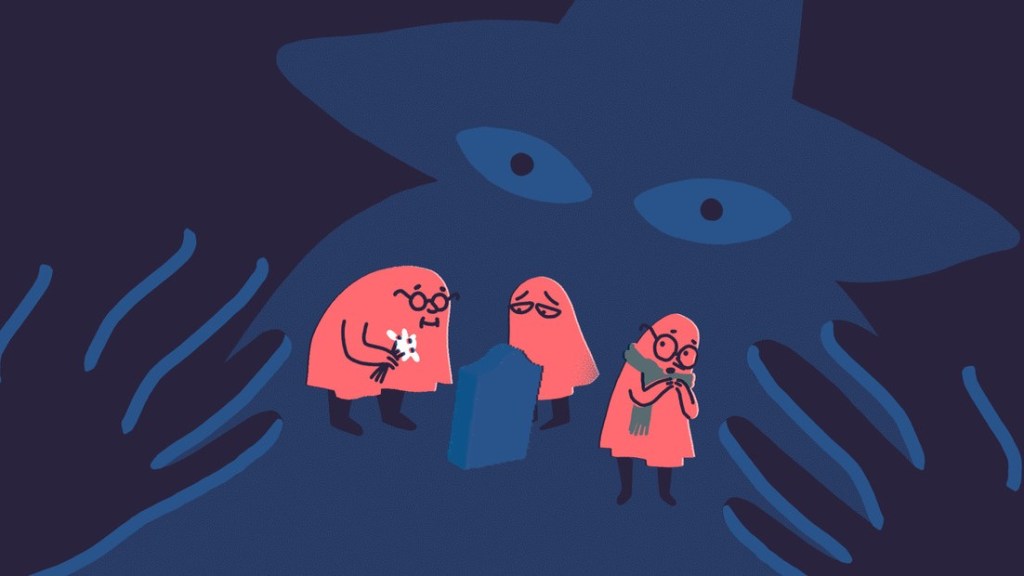 What happens after we die? It’s a big question, but How to Say Goodbye has a good crack at answering it. Turns out, the afterlife is chaotic, colourful, and entirely composed of conveyor belts. Walking is only for us chumps who are still alive (I knew it).

Your deceased loved one (who you can name, if it’s not too sad for you) has become a ghost. They’ve arrived in a hazy, yet familiar, realm that is populated by more ghosts and spleens – ghosts who have forgotten themselves. Levels, like kitchens and gardens, are circuitous (travelling off-screen usually results in reappearing at an opposite place), as if your loved one is always being drawn back towards the gist of some important memory.

Despite finishing the game, I would not say that I entirely understood the gameplay and structure, but this confusion was an evocative part of the experience for me. I got stuck, near the beginning, because I fundamentally mistook how, and why, things move. I would explain further, except that I feel it’s important for you to discover this aspect for yourself.

How to Say Goodbye is partially a sliding block puzzle, like Sokobos, partially a tactile conveyor belt experience, like Blub Emporium, and almost plays like Swim Out, in which you have to consider where unfixed objects will be positioned later, based on your choices now. Game pieces include ghosts, locked doors, keys, blocks, pressure pads, windmills, teleporters, wires and a square grid that becomes conveyor belts, which vary according to where you activate them, how you want to move them and which level pieces are blocked, or open.

I solved puzzles by positioning pieces carefully, but also by swirling the mouse around the screen just to send ghosts wherever any given belt may take them next. This may sound like a disorderly way to solve puzzles, but experimenting with belts and movement reveals (at least) how teleporters and windmills work, as well as less explicit methods of getting from here to there.

Some aspects are unintuitive, like how one ghost can pick up a key, and then another can use it in a location that is inaccessible to the first. Some levels also span multiple screens, with the camera moving to reveal more space, only when a ghost reaches a (seemingly) arbitrary square. A couple of chapters are convoluted, with (around) eight doors leading ghosts through complex mazes, in which keys from one screen are required in another, and so on. Interestingly, I never became frustrated by this, largely because disorientation is contextualised within the narrative, even if getting lost requires remembering how to navigate the same puzzles multiple times, forwards and backwards.

The story is mostly told through snippets of dialogue and cutscenes, as well as overarching metaphors. At one moment, I guided two ghosts onto adjacent squares, to solve a puzzle, and their pained expressions broke into smiles. Another poignant moment was when a ghost hugged a snowman, and melted it with their tears.

And, frequently, puzzles are solved by placing two, or three, ghosts next to each other in a way that highlighted togetherness and belonging, at least for me. I’m convinced this belongs on display, somewhere where people could engage and discuss their interpretations together, as we each bring a unique cultural and personal knowledge to this particular table.

Although you guide your loved one through most of this experience, How to Say Goodbye is not really about them. It’s about you, in a way that almost never mentions you at all. Death separates us physically, but perhaps not spiritually, or forever.

A copy of How To Say Goodbye was provided and played for PC for the purposes of this review.