The abridged version of the pen-and-paper Fallout Roleplaying Game is an approachable and welcoming wander through the Commonwealth.
Jam Walker 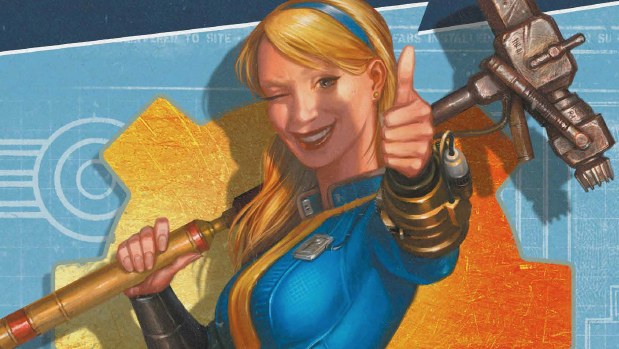 UK tabletop games publisher Modiphius released their Fallout: The Roleplaying Game core rule book in 2021. I was always curious about it, but an expensive hardcover volume of rules and systems is never the most approachable of products. Thankfully, they’ve now made the same wise move that many RPG publishers are doing by introducing a cheaper, abridged starter set as a stepping stone to the big books. I’m glad they did, or I probably would have never taken the plunge into their excellent game system.

Fallout: The Roleplaying Game, and by extension, this starter set, present a ruleset, world guide and narrative campaigns set in the Boston Commonwealth a little before the events of Fallout 4.

It’s unclear whether basing their tabletop RPG adaptation of the universe squarely on the most recent core game in the series was a conscious creative choice by Modiphius or purely a restriction of their licensing, but their careful avoidance of mentioning anything from the other games sure makes it feel like the latter.

I never held much love for Fallout 4 personally, but placing the starter set’s narrative within locations recently familiar to a large part of the fandom does feel like a smart move, regardless of whether Zenimax imposed it or not. It not only grants those familiar with the video game an existing familiarity of the environments, it also provides the game master with a vault of easily-obtained reference material from which to illustrate things for players entirely unfamiliar with the Fallout universe, as mine were.

The starter set costs AUD$49.95 and includes a 53-page softcover rulebook, a 60-page softcover campaign book, six premade characters on double-sided sheets, seven dice, and a pile of cardboard bottle cap tokens to use as general counters. The starter rulebook is, of course, a cut-down version of the AUD$89.95 core book, eschewing the character creation and campaign-building content of its hardback sibling. It’s a really well-assembled and a quite ‘complete’ feeling tome in its own right though, and would easily be worth getting just as a more convenient reference guide at the table over the hefty 400-page core.

The premade player characters cover a good cross-section of Fallout denizens, and each are well-designed and well-written enough to provide a solidly-defined canvas upon which players can paint their own chosen personality.

One of my players chose the super mutant ‘Old Tallman’. Tallman’s bio describes them as basically having been around so long that they’ve seen and done it all and now just wish to walk the Earth, meeting people and getting into adventures, like Caine in Kung-Fu. This particular player came to the table with absolutely zero knowledge of the Fallout property, but was instantly able to spin Tallman’s two paragraphs of backstory into a delightfully unique ‘casually-murderous Matthew McConaughey’ who we are all now entirely too emotionally invested in the journey of.

The included adventure in the Fallout The Roleplaying Game Starter Set itself is a decently compelling yarn, but its biggest strength is in how impressively well-paced it is. The story is split into three distinct chapters with the idea seeming to be that it would be played across three reasonably lengthy sessions. The beats of each chapter are crafted in such a way that they could easily be subdivided by the Games Master even further for groups who may find it harder to commit to a whole afternoon of play. Small revelations and twists abound, all of which make for easy cliffhangers to pause play, while being engaging enough to make everyone keen to return.

It also has an ending that provides a perfectly satisfying place to retire the characters should players wish to graduate to creating their own using the core book, but it also serves as a really exciting launch pad to take those characters into a  bigger world of post-nuclear adventure should the party wish to hold on to them.

Anyone familiar with the broad strokes of how Dungeons & Dragons works shouldn’t have too hard a time adjusting to the few unique aspects of the rule system established by publisher Modiphius. Probably the biggest difference here is in how skill checks work – something I really like a lot.

For example, say Augusta Byron wants to try to convince a shopkeeper to give them a better price on something. First, the Games Master (GM) picks the difficulty on a scale of one to five – this determines how many successful D20 rolls the player must make in order to succeed. Players will always roll two D20’s as a baseline, even if the difficulty of the challenge is only one.

The GM states that the shopkeeper is desperate for any caps that they can get their hands on, so they declare it an easy test with a difficulty of one. A character’s capability with whatever they’re attempting is determined by combining whatever S.P.E.C.I.A.L. stat point and Skill they feel are the most relevant, which in this instance would be Charisma and Speech totalling eight.

Augusta rolls two D20s which come up as a one and a five. A roll of one is a critical success, and so she has now not only passed twice, but three times as a crit counts for two successful results. She has not only succeeded at the test but also generated two Action Points for the additional successes, which are added to a pool shared by the party.

Later in the adventure, Augusta wishes to try to silently snipe at a raider from a long distance, whose body is obscured by an abandoned car. The GM determines that this would be a difficulty of four rolled against Augusta’s combined Agility and Small Guns value of seven. She only has two D20 rolls as a baseline, but does have a decent chance of succeeding on those alone due to Small Guns being one of her ‘Tag’ skills which makes *any* successful rolls count as a critical success, thus being worth two successes.

She decides to lessen the gamble and buy an additional D20 roll by burning one of the party’s Action Points, and scores a seven, a twenty, and a two, passing the test. A roll of twenty is regarded as a ‘complication’, but does not invalidate the success of the shot. Instead, a complication presents the GM an opportunity to do something inventive in the moment – in this instance, informing the party that the shot succeeded in killing the raider by actually hitting and detonating the nuclear engine of the car, attracting the attention of all of their raider buddies down the road.

It may sound confusing on paper, but in practice, it’s a system that brilliantly rewards players for flexing their characters’ particular skills. The fact that Action Points are shared and only five can be held by the party at a time naturally helps keep player groups focused on working together, and the baked-in complications mechanic keeps everyone on their toes with opportunities for the GM to throw curveballs.

I’m hugely impressed with the Fallout: The Roleplaying Game starter set, as were my players. It’s exactly what this kind of product should be – approachable, well-written, affordable and fun. I’m eager to see what Modiphius do with their upcoming Winter of Atom ‘quest book’ expansion. I just really hope it includes elements from Fallout games other than 4.

A copy of Fallout The Roleplaying Game Starter Set was provided for the purposes of this review. GamesHub has affiliate partnerships. These do not influence editorial content. GamesHub may earn a small percentage of commission for products purchased via affiliate links.