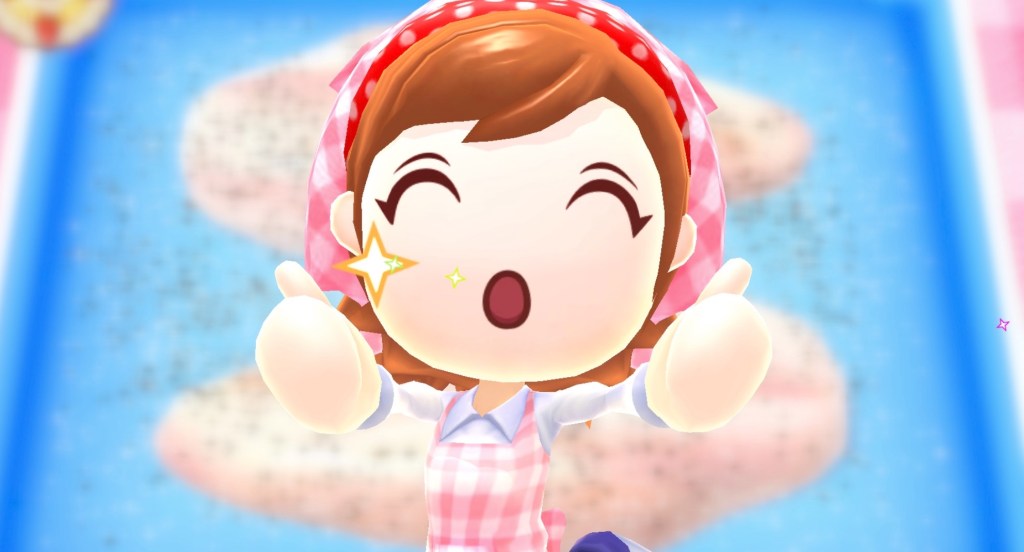 The Cooking Mama franchise has enchanted plenty of aspiring chefs since the early days of the Nintendo DS – but while each iteration has slowly expanded the minigame-focussed gameplay of the series, they’ve all largely stuck to the same basic formula: you play as a young cook working your way through a recipe book. Cooking Mama: Cuisine!, the latest game in the series, is a fresh title for Apple Arcade that actually strays away from this formula, and brings its own unique pros and cons.

The core twist is that in Cuisine!, you get presented with a variety different ingredients, which rotate on a daily basis, and need to combine them to form meals. You don’t know what recipe you’re creating as you play, and the entire end result is a mystery, revealed only when Mama pulls back the curtains at the end of your cooking cycle. It’s a simple flip of the standard formula – but one that works excellently to keep you hooked, and trying new things.

Some days, you get beef as a base ingredient. Other days, it’s chicken or pork. With a handful of other ingredients available alongside this base, you’re encouraged to experiment and try new combinations until you find one that works. Successfully creating a dish will unlock new daily ingredients which can be incorporated into future meals.

Cooking Mama: Cuisine! is designed as a moreish mobile title – one that you can easily jump into every day in quick bursts. There’s real joy to be had in popping in and discovering what ingredients are around, and whether you can use them to fill the missing spots in your recipe book. But the more casual nature of the game does hamper it in a few regards.

Currently, the recipe book in the game is fairly slim, with only four major recipes available for most base ingredients. There are four ‘chicken’ recipes to find, four ‘beef’ recipes, four ‘dessert’ recipes and so on – and while this may increase as the game expands, jumping in too frequently will likely result in disappointment, thanks to the increased repetition of daily ingredients and overall lack of variety in meals.

Playing the game over the course of a week, I had two days that repeated every ingredient, meaning I couldn’t unlock anything new until the following day. This streak was eventually broken by the appearance of chicken on the fifth day, which unlocked a number of new possibilities.

While this is by design, the chance-based nature of ingredient appearances does result in an uneven experience for Cooking Mama: Cuisine!. It’s fun to discover new recipes, and there’s always good, frantic mini-games to complete, but the game can quickly become repetitive, and it’s very common to start a recipe and realise halfway that you’ve already completed it before.

Occasionally, completing a recipe twice will unlock a new variant – steak with corn, or doughnuts with chocolate sauce for example – but other times, you’re just repeating recipes to gain points that can unlock in-game cosmetics, like new hats or clothes for Mama. Seeing the same meals pop up again and again can be a downer, particularly when you really just want to complete your recipe book.

That said, the mini-game loop in Cuisine! is still very engaging, and filled with a mix of classic and new Cooking Mama activities that allow you to exercise your reaction time, creativity, memorisation, and other skills. It’s nearly enough to make you forget about the game’s limited recipe range.

Touch controls are perfectly suited to Cooking Mama, with the first few games in the franchise having showcased the Nintendo DS touch controls well. Here, this gameplay is once again adapted to screens (the game is available on iOS devices, Mac computers and Apple TV) with simple flicks, rubs, presses, pushes and pulls necessary to correctly complete each recipe mini-game.

Rub the screen to coat your steak like a schnitzel. Circle potato growths to cut them out with a spoon. Drag and drop rice lots onto a plate to please Mama. Each mini-game requires a hefty dose of concentration, with a generous timer counting down seconds as you cook. While some slices of gameplay are stressful – the pasta-cutting mini-game in particular requires good finesse – most are a satisfying breeze.

Mama is also fairly forgiving in this iteration, with simple mistakes not penalising you too much during gameplay. If you burn an ingredient or waste it in the final stages of cooking, you can still get a lower score, but it’s much easier to nab the coveted three-star award without the need for total perfection. Either way, Mama will be proud of you.

While the tweaks to the main formula are surprising and the repetition can be a bummer (particularly when your end result is finally revealed as a familiar recipe), Cuisine! retains the light-hearted fun and mechanics of its predecessors – including the franchise’s iconic soundbites and aesthetic.

It also provides constant incentives to return to the game as you build up points for each completed recipe, which eventually unlock new additions for the kitchen. You can change up the cloths you make food on, make your pots and pans multi-coloured, put some gingham on your shelves, or paint the walls a brand new colour.

It’s a minor feature, but one that keeps the game feeling fresh even when the daily ingredient reveals are occasionally disappointing.

As it stands, there’s a lot to love in Cooking Mama: Cuisine!. While the action lasts, it’s a colourful, delicious-looking blast – but after a few days, it’ll be clear Cuisine! doesn’t have too many tricks up its sleeve.

As a mobile-first game designed to be played every day, there’s a potential future in new updates, recipes, and daily ingredients – but for now, it’s a dish best served with tempered expectations. While it’s an excellent iteration of the classic Cooking Mama recipe, it’ll probably take some time in the oven before becoming fully-flavoured.

The iOS version of Cooking Mama: Cuisine! was played on an iPad for the purposes of this review. An Apple Arcade subscription was provided to cover games on the service.