Conan Chop Chop is an enjoyable rougelite dungeon crawler that puts a lighthearted spin on Conan the Barbarian. Just try not to play it solo.
Pedro Cooray 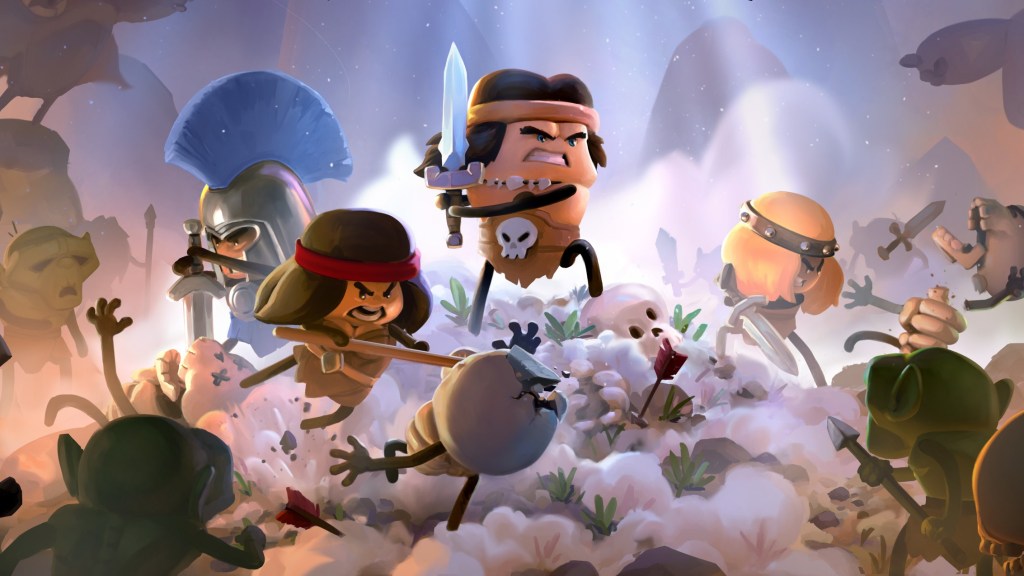 Conan Chop Chop is interesting new ground for the Conan the Barbarian franchise. While the publisher’s previous adaptations were (and continue to be) gritty, violent, survival-heavy affairs, Conan Chop Chop is a cartoonish roguelite that is surprisingly family friendly. It rarely deviates from standards set by other games in the genre, and its emphasis on multiplayer lessens the solo experience, but Conan Chop Chop is enjoyable nonetheless.

Each playthrough of Chop Chop begins at the central hub town, where you can purchase equipment and upgrade skills to begin your quest. You retain your money and return to town when you die in your adventure, and you can then purchase new equipment to strengthen subsequent runs. You unlock more features as you play, and also help to rebuild your town along the way. It’s a straightforward, but satisfying system that gives the impression that everything you do matters.

As a game for audiences of all kinds, Conan Chop Chop also walks an approachable path. Its fixed, top-down perspective is accompanied by a control scheme that uses two analog sticks for moving and attacking. This smooth, quick, and wide attack arc means you always hit your mark.

Dashing is tied to a stackable cooldown, letting you dodge a number of times in a row at a time. Arrows and bombs are also governed by cooldowns, negating the need to collect ammo – although the long time to replenish them doesn’t make them a viable crutch for dealing with regular enemies.

There is also a parrying mechanic system, for those wanting something a little more demanding.

The game offers four different playable characters who all have unique skill trees and abilities – Conan can enter a rage state where his hits get stronger and faster, for example, and Valeria the spearwoman can turn into a small tornado that deals constant damage.

It all comes together in a light and engaging experience. But it’s not without some puzzling ideas – the strangest of which are chests.

Chests found while exploring are opened as you approach them – if they contain money or resources. But chests containing gear can only be opened by keys, which rarely drop from chests and enemies. In every run, I encountered far more locked chests than keys, which means I was only able to collect a couple of pieces of loot at a time. There’s also no way to know if you’re about to waste a key to find equipment worse than your current gear, which I encountered a handful of times. Since all loot disappears when you die, the locked chests only serve to feel restrictive.

The other issue is that I was only able to play the game alone, an experience which frequently reminded me that I was not supposed to be doing so – it is, after all, a game designed around multiplayer fun. From a bug that refused to let me proceed until the game could find my non-existent party members (which unfortunately forced me to quit and lose progress), to certain equippable charms that are only useful when playing with others, it’s evident that Conan Chop Chop is a co-op game first.

On paper, it’s a commendable effort, particularly as couch co-op games are a rarity today. It’s very easy to imagine how aspects of this game could be made better with a few friends by your side. But if you don’t already have an eager group of friends ready to go in your household or online, it can be a letdown. Even when trying to find random online parties to matchmake with, I was unable to find a single game, even in other countries.

Conan Chop Chop, like any good roguelite rewards your playtime and marks your progress by increasing the amount of variety you encounter each time you play. It’s cheery, lighthearted entertainment, but the focus on local multiplayer comes with the loss of a stronger game for solo players, where it’s a lot easier to think about the missed opportunities and strange restrictions contained within its bright facade.

A PC copy of Conan Chop Chop was provided and played for the purposes of this review.