Conan Chop Chop is a light-hearted take on the Conan the Barbarian franchise that focuses on humour over intensity.
Leah J. Williams 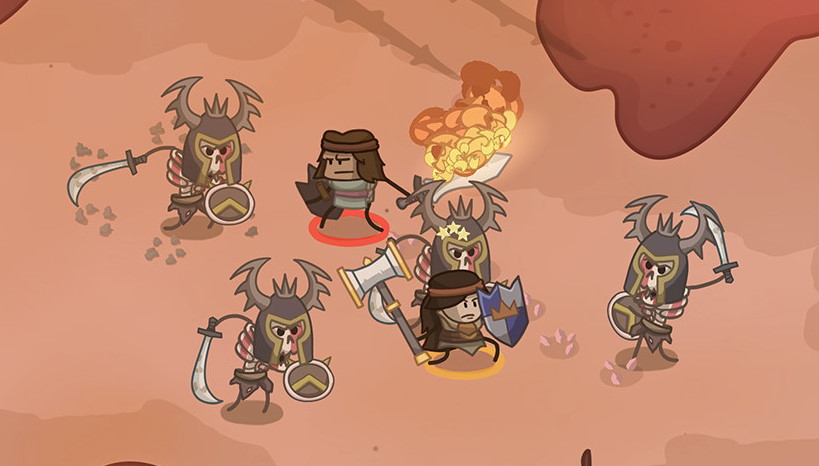 Conan Chop Chop started life as a student project, and against all odds, innovated to become a wacky adaptation of the notoriously-serious Conan the Barbarian franchise. It couldn’t have happened with the support of current Conan video game rights holder Funcom, which saw the spark of tongue-in-cheek humour in the original project, and believed in its potential to exist within the Conan universe.

In the game, developed by Australia’s Mighty Kingdom, you play as one of four iconic Conan heroes: Conan, Bêlit, Valeria, and Pallantides, each on a quest to prove their worth as the strongest hero, while evil wizard Thoth-Amon attempts to resurrect high priest Xaltoun to overtake the world.

Pallantides uses his shield to knock back enemies, Bêlit is an expert in combat rolls and dives, Valeria is a ‘finesse’ fighter with a dashing slice, and Conan is an anger-filled rager who operates well on low health.

Each has been given a ‘slapstick-friendly’ makeover in Conan Chop Chop, with Mighty Kingdom making clear in a recent preview that it was the humour and potential for jokes that led to the inclusion of each character and boss.

While Conan lore has typically been dark and dense, Chop Chop is attempting to avoid the ‘darker parts’ of the narrative by creating an accessible, hilarious experience for everyone, even those not versed in Conan lore.

According to Kim Forrest, creative director at Mighty Kingdom, choosing which characters to put in the game was all about having fun, and working closely with Funcom. He told GamesHub the development team had clear ideas about who they wanted to include, and that Funcom was never ‘prescriptive’ about which characters could or couldn’t be used.

That said, Forrest did state that darker characters were purposefully avoided, including Red Sonja, because it was harder to see their ‘comic value’. In contrast, characters like gorilla boss Thak were easily lambasted. There’s far more humorous potential in a giant, caped gorilla than there is in a battle-hardened, bikini-wearing assassin with a horrible backstory – and Mighty Kingdom was distinctly aware of this throughout Conan Chop Chop‘s development.

This was also part of the reason the team chose Thoth-Amon as the game’s main villain.

Forrest described his character as ‘a bit like Dark Helmet from Spaceballs‘, who operates as a caricature of classic sci-fi villains. In that regard, Thoth-Amon is a stereotype of a dark wizard, complete with his own own silly, villainous plan and over-the-top presence.

The gameplay preview shared with GamesHub showed off a lot of the ‘skewering’ humour of the game, and plenty of cute gags, like a crown-wearing slime companion, over-the-top combat, and dramatic cut scenes that make the narrative feel ridiculous and engaging, all at once.

It might not feel distinctly Conan, but Conan Chop Chop is a rare opportunity to explore the franchise in a way that highlights every bit of wild lore, and the inherent ridiculousness of stereotypical 50s-era ‘swords & sorcery’ tales. The freedom that Funcom allowed developer Mighty Kingdom is fairly unprecedented for the franchise, but its good sense of humour and slapstick antics should give fans an opportunity to explore Conan in a wilder, wackier way, without being bogged down by the lore’s darkness.