Poor performance on PlayStation sullies this remaster, but a never-before-seen relic helps to ease the disappointment.
Edmond Tran 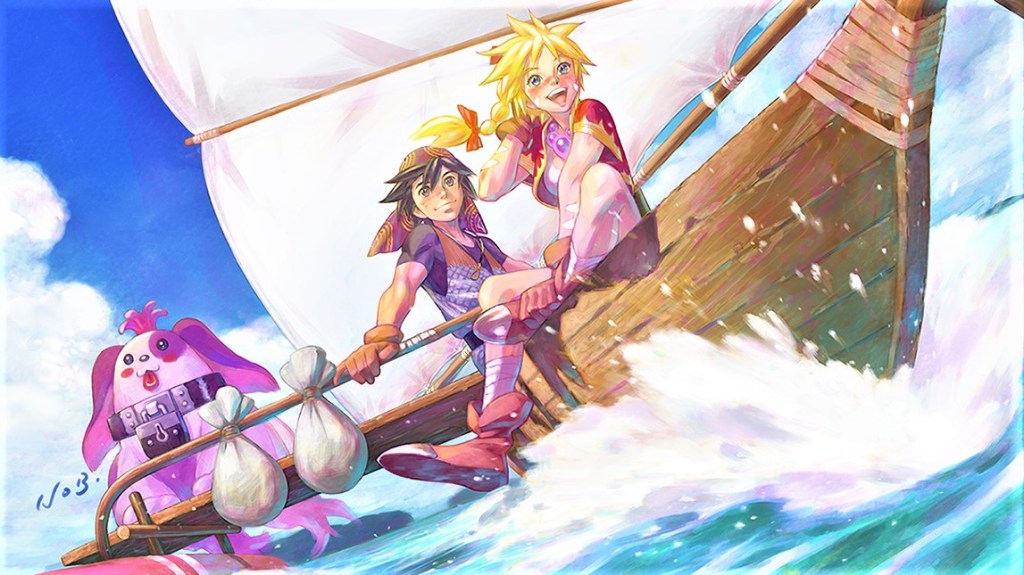 The first time I ever heard about Chrono Cross was in an expensive import issue of Electronic Gaming Monthly (EGM), which I read for ten minutes at a time whenever I visited the newsagency. The peril of knowing about its existence through an overseas magazine, however, was eventually realising that the game would never make its way to my country.

Like its predecessor Chrono Trigger, as well as a number of other SquareSoft games, Chrono Cross would only ever be released in Japan and the US. Presumably, this was due to the way game distribution worked at the time, and the amount of effort that would be needed to translate it to all the EFIGS languages (British English, French, Italian, German, Spanish) required for release in PAL territories like Europe and Oceania.

As a determined kid who got to experience Chrono Trigger through emulation (I’ve since bought and now own numerous releases, if anyone is calling the police) I considered, and still consider, Chrono Trigger to be one of the all-time great Japanese RPGs, a time-travelling epic that remains a timeless video game. It pained me that I might never be able to play Chrono Cross – PlayStation emulation was absolutely out of the question in those days.

22 years later, the company now known as Square Enix has released Chrono Cross: The Radical Dreamers Edition, a remaster of the PlayStation One game. As with a number of recent Square Enix remasters, The Radical Dreamers Edition upscales the game’s visual assets to modern, high-definition resolutions, features the option for reimagined character models and anti-aliased backgrounds, and has a number of quality of life features available from the get-go – auto-battling, speed toggling, the ability to turn off enemy encounters, and more.

Unfortunately, what The Radical Dreamers Edition gains in visual fidelity, it loses in performance.

Time comes for us all

Playing the PS4 version of the game running on a PS5 console, Chrono Cross as it exists in The Radical Dreamers Edition runs at a notably low and inconsistent framerate. Running through populated parts of the world can result in the odd stutter, and scenes filled with 3D models and particle effects – for example, every battle you encounter – can feel incredibly choppy.

This is a surprising thing to discover, given the age of the source material and how far technology has come since. The obvious cause of the problem seems to be the ‘New’ graphical style; performance issues are reduced when opting for the remaster’s ‘Classic’ graphics, which turns off the anti-aliasing effect and reverts to the original character models. But, the issues still remain.

As a point of comparison, and to make sure my memory of the past wasn’t being clouded, I loaded the PSOne Classic version of Chrono Cross on a PS Vita. Released on the North American PlayStation Network Store in 2011, it was my first experience of playing Chrono Cross, and required jumping through a few hoops to access – this version also never made it to European and Oceanic territories.

Playing through those same opening hours once again, it was obvious that the PSOne Classic version ran far more smoothly. There was still the odd stutter – this was an incredibly ambitious game for the hardware at the time, after all – and the resolution of the game was obviously lower. But it was overall a far more stable and enjoyable experience than The Radical Dreamers Edition on either graphical setting.

This is a major source of disappointment when it comes to The Radical Dreamers Edition, and I hope versions of the game on other platforms, especially PC, fare better. But what makes the situation on PlayStation even more disappointing is that the PSOne Classic release of Chrono Cross, which is not playable on PlayStation 4 or PlayStation 5 consoles, is becoming increasingly difficult to access as time goes on.

At the time of writing, the game is only accessible for purchase via a PS3 console. Even then, after downloading and attempting to run the game on a PS3, I was told that my licence for the game had expired. I had no problems playing it on a PS Vita, but on that platform, Chrono Cross doesn’t even appear on the storefront – I had to dig through my list of previous purchases to find it.

There’s hope that the PSOne version of the game will appear as part of PlayStation’s new and upcoming PlayStation Plus service, which will give access to a selection of classic PlayStation games under condition of a monthly subscription fee. But at the time of writing, it’s not guaranteed that Chrono Cross will be part of it.

A unique identity that crosses generations

Technical issues aside however, Chrono Cross still remains a captivating RPG. There’s something to be said about the game’s concise style of storytelling, relying on short, sharp dialogue that gets you straight into the momentum of the game – something that the Japanese RPGs of today are infamously poor at.

Chrono Cross also remains unique and one-of-a-kind in its design. As a significant departure from the style of Chrono Trigger and many RPGs of the time, it had a unique tone and style largely embodied by its relaxed tropical setting, and an unorthodox and somewhat ludicrous approach to the design of its character and party system.

Though you can only have three people in your party at once, you can meet and recruit over 40 characters throughout the story – though not all in one playthrough. It’s a novel idea, even today, especially given the game’s theme of the fleeting nature of time, alternate universes, missed opportunities, and lamenting what could have been.

While it’s difficult to form a meaningful attachment to anyone outside of a few key characters, it’s hard not to respect how the game works to try and make each character’s outward personalities immediately distinct as possible. In what other game can you befriend a life-sized voodoo doll come to life, or a big pink puppy with a lisp?

Equally as unique is its turn-based combat system, which also shirks tradition. Attacks are built on a combo system that allows you to cobble together a custom attack string each turn, using three different strengths of attack and limited by hit chance (which increases on each successful hit) as well as a finite stamina resource. Special techniques and magical abilities are charged by physical hits, and though each character can equip almost any ability you find, most can only be used once per battle. The abilities feed into an elemental system that constantly puts the entire battlefield and the effectiveness of participants in flux, and it all results in an action-packed approach to turn-based combat that remains extremely engaging.

Though a fan translation of the game has existed for many years, this is the first time Radical Dreamers has been officially made available outside of Japan, and this version finally includes an official English translation.

A game that predates the development of Chrono Cross, it serves as the origins of Cross characters Serge and Kit as they explore a labyrinthine castle. It’s a brief, but focussed and effective game, that uses sparse visuals, music, and words to incredibly great effect.

The translation’s deft use of narrative creates a strong sense of atmosphere that leaps off the screen. The game’s creative, Dungeons & Dragons style textual interpretation of turn-based RPG battles also adds a nice sense of liveliness and excitement that is still effective – instead of choosing actions like ‘Attack’, you’re given the chance to perform dynamic actions like pull a skeleton’s levitating head from mid-air and smashing it.

Aside from strong character and world building, Radical Dreamers is also made up of a few lock and key puzzles. The small amount of random enemy encounters and an obscured health and relationship system keeps things tense, offers the possibility of different endings, and the whole thing only lasts a few memorable hours at most. The events of Radical Dreamers would be translated visually to Chrono Cross years later, but the game itself remains fascinating today.

After Chrono Trigger received multiple re-releases on handhelds, home consoles, mobiles, and PC, it’s good to see the lineage of the Chrono series finally get the modern treatment. But despite multiple Final Fantasy remasters paving the way for this one, it’s disappointing to see the performance of this 23 year old game sacrificed for fidelity, especially on a PlayStation console, and especially when avenues to digitally obtain the original PlayStation One game via the PlayStation store are slowly becoming more inaccessible.

As such, Chrono Cross: The Radical Dreamers Edition represents two examples of game preservation with varying results. The sharper, more accessible, but poorer-performing Chrono Cross is both a blessing and a curse. But the debut of an official English translation of Radical Dreamers is a moment to celebrate as a Chrono and video game history fan.

As it stands, Chrono Cross: The Radical Dreamers Edition feels like an acceptable collection for a new generation, but it also serves as a reminder about the importance of being able to preserve video games as they originally were. Hold onto those CDs if you have them.

The PlayStation 4 version of this game was provided and played for the purposes of this review.