Card Shark carries a lot of aces, but getting them into your hand can be tedious.
James O'Connor 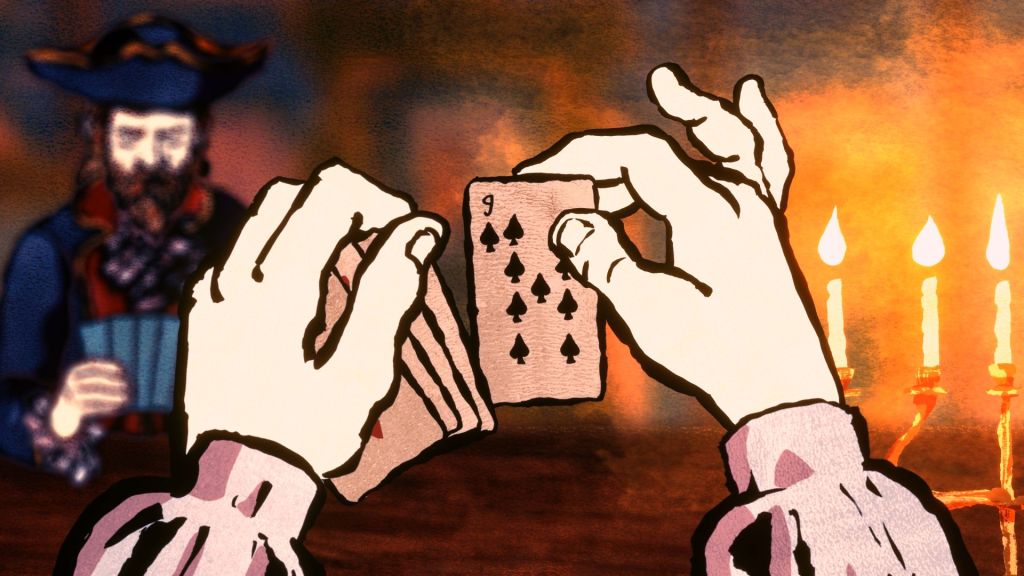 I am an easy mark for magicians. Bust out a pack of cards, and I guarantee that I won’t be able to figure out how you got the card I chose into the second deck in your pocket, even if I focus all my attention on the hands, looking for the tell. There’s a power to even the most simple card tricks, because if you can’t figure them out, they hint at a possibility that magic does, in fact exist, even if it’s something you can’t tap into.

There’s some magic to Card Shark, too. The premise is irresistibly unique: you play as Eugene, a burgeoning card cheat who becomes embroiled in an 18th century French conspiracy. As you move from location to location, Eugene must learn and master new ways of shuffling, dealing, and sneaking cards, which usually boils down to pulling off the right mix of button presses and stick movements once the cards are in front of you.

Eugene learns these tricks under the tutelage of the Comte de Saint-Germain (a real Count of the time; indeed, many of the characters in the game are historical figures). The Comte is a cheat with a grudge against high society, and together with a merry band of rogues you travel across Europe, seeking answers to some big questions. In most games, your goal is to ensure the Comte’s victory, getting him high-value cards whenever possible. As the game unfolds, and you learn more tricks, the Comte’s true mission begins to emerge, too.

The best thing you could say about Card Shark is that there’s no ‘it’s like Game X meets Game Y’ formula here – it’s not quite like anything I’ve ever played. By the end, you’ll have a solid repertoire of moves and terminologies, knowing the difference between injogging and outjogging, how to do a false riffle shuffle, and know just how important it is to protect your cards from the guy pouring your wine.

In each encounter, you’ll need to perfectly pull off a sequence by stringing together the techniques the Comte has explained to you beforehand, which are a mix of card manipulation, hand signals, and ways of glimpsing cards being sent across the table. Get the sequence correct and the hand is won.

But as fresh as the idea is, Card Shark’s ingenuity only extends so far. Actually performing these tricks boils down to pattern memorisation and repetition (or, if you’re like me, pausing frequently to double-check the tutorial for the current grift’s controls), along with the occasional reflex test or quick-time event. There’s very little room for improvisation or quick thinking outside of a few clever setpieces, nor any real sense that you’re outsmarting your opponents, who may accuse you of cheating if you take too long, but who otherwise might as well not exist once the cards are out. It’s never clear what card game you’re playing, exactly, but if you don’t pull off your cheat, you’re guaranteed to lose each time.

That’s not to say that it isn’t occasionally thrilling to rip off high society. Some of cheats are particularly fun – using a mirror on the table to check which cards you’re handing an opponent feels pleasingly tactile, as do some of the more complex shuffling techniques.

But tedium and frustration can set in, too – it’s especially irritating when you mess up early in a sequence, and have no choice but to go through every other part of the process, knowing that it will fail. It gets worse – to clear each encounter you’ll typically need to win three games, and when you fail because you messed up a quick time event near the end of that third game, starting again from the beginning doesn’t feel good.

Because of the way the tricks work, your only real opponent is yourself – your memory, your reflexes, your patience. As a result, the sweetness of victory is rarely equal to the sting of defeat – you didn’t outsmart your opponent, you simply remembered the right order of movements this time. There’s a certain honesty to this approach, since learning card tricks really is a matter of repetition and memorisation, but here you don’t get the smug sense of satisfaction you might get with real cards.

It’s at least impossible to get sick of looking at Card Shark, because it’s glorious. Nicolai Troshinsky’s painterly art style exudes warmth, bringing the excesses and beauty of the gambling halls, manses, and countryside locations to life.

There’s also a wonderful bent towards the absurd here, including a beautifully realised death mechanic (that I don’t want to spoil for reasons that will only become clear when you experience it yourself) and a series of twists and reveals that ties the whole story into an interesting knot. The soundtrack is delightful too, fitting perfectly with the game’s tone.

I’ve held off on the card puns for this review, but it’s worth saying that Card Shark is occasionally ace, flush with good ideas, and has plenty of heart. It won’t always deal you the best hand, but if such a unique concept suit(e)s your needs, you may be able to turn a blind eye to the moments where it flops, and go all-in, rather than letting it get lost in the shuffle.

That is to say: Card Shark doesn’t quite live up to the full promise of its concept, but it has a few good tricks up its sleeve.

The Nintendo Switch version of Card Shark was provided and played for the purpose of this review.

James O'Connor has written about games for a long time. He has written for games, as a narrative designer, for less time. Against his better judgement, he's on Twitter: @Jickle