Vanguard’s campaign recalls the same shooting galleries seen year after year, full of cliches and with somehow even less point to it all.
David Wildgoose 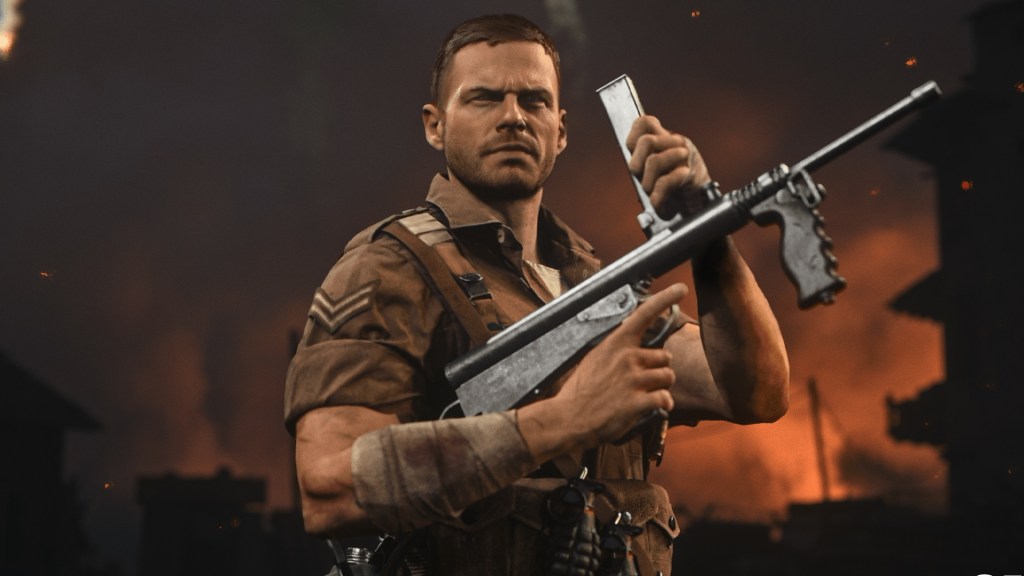 You can track the tonal progression of the Call of Duty series through its so-called ‘death quotes.’ In the first few games, these quotes – displayed in stark white text on plain, sombre black when the player dies during the single-player campaign–were sourced from significant political or military figures pivotal to the specific conflict depicted by the game.

When you’re gunned down crossing Pegasus Bridge or bleeding out in the Stalingrad snow, the likes of Churchill, Stalin and MacArthur are there to remind you of the human cost of war. The contrast between their words, delivered from their secure war rooms as they survey a map and send millions of men to their deaths, and the carnage you’ve just experienced on the ground, could not be clearer.

Over time, the selection of ‘death quotes’ has grown to incorporate aphorisms from philosophers, playwrights and authors alongside those of political leaders decades and even centuries distant from the war at hand. That detachment is crucial. Any meaning these words once had is lost when Napoleon, Shakespeare or Gandhi pops up to reflect on your death during the US invasion of Panama. While some of the more ‘modern’ entries in the series have included contemporary commentary from many of the architects of America’s recent crusades in the Middle East, the juxtaposition of Cheney’s cynicism against the accelerated bombast of the action inevitably rings a little hollow.

With Vanguard, Call of Duty seems intent on draining any residual meaning from its ‘death quotes’ by employing its cast of fictional characters as the founts of all wisdom. When larrikin Aussie demolitions expert, Lucas Riggs, is shot dead by a German sniper while running across the North African desert, the screen fades to black and you’re greeted by the following words:

“An explosive personality can get you far in life. Just remember the length of your fuse.”

The man not only writes his own eulogy, but manages to squeeze in a humourless aside about the size of his manhood. Not to mention that it doesn’t have anything to say about war, let alone offer something profound. It feels like one of dozens of throwaway lines you might write for the grenadier class in a more cartoonish game, yet here it’s elevated to the Call of Duty pantheon previously occupied by Plato, Patton and Powell.

Call of Duty: Vanguard is high on its own mythology. Early Call of Duty games recognised that the war effort was about being just one of many. Over the course of the series, recurring named characters have taken centre-stage while a reliance on special forces operatives has emphasised individual heroics over the collective. Vanguard feels like the logical conclusion of this trend. You play as multiple members of the Vanguard, a six-person spec ops team assembled to investigate a secret Nazi project during what would prove to be the final few months of World War II.

Much of the campaign is told in flashback and details, well… it’s not entirely clear what point it’s trying to make. For the Vanguard’s leader, black British paratrooper Arthur Kingsley, it purports to demonstrate how he assumed a command role in the face of resistance from not-racist-exactly-just-sort-of-broadly-sceptical squadmates. In reality, he just takes over after the previous leader dies in a battle.

Elsewhere, the cliches pile up like bodies at Normandy. Russian nurse Polina Petrova sees her loved ones killed at Stalingrad, and by the end of the day has transformed into a one-woman sniper army, while the aforementioned ‘digger’ Lucas Riggs disobeys British authority to save the day and is subsequently court-martialed. Somehow this makes him a good fit for the Vanguard squad.

The most cringeworthy backstory belongs to white American pilot Wade Jackson who, after his maverick bravado sees him crashland behind enemy lines on Bougainville, is taught the value of teamwork by the ‘coloured’ unit of segregated black American soldiers who rescue him. The actual substance of this lesson is lost amid the lazy platitudes that comprise the banter between Jackson and his new 93rd Infantry Division friends. But perhaps the moment when Jackson picked up the flamethrower dropped by a fallen comrade – literally being passed the torch – and used it to barbecue a bunker complex of Japanese soldiers proved a particularly edifying incident.

Call of Duty: Vanguard’s campaign mostly feels like a compilation of missions from previous games in the series, albeit absent any of the memorable high points. There’s a mission set on two trains that are speeding along side-by-side, but it’s so dark that you barely notice you’re thundering through the night and the chance of falling off so minimal that there’s very little sense of precarity. There’s a dogfighting mission over the Pacific where you do little more than turn endlessly in circles trying to target the enemy Zeroes and hoping you don’t get hit, but it takes place on a cloudy day and the spectacle suffers as a result.

A couple of stealth missions offer a change of pace with mixed success. Kingsley’s night-time trek through the Normandy woods is a tedious exercise in trial-and-error, while Jackson’s initial escape through the PNG jungle is so straightforward as to be completely lacking in tension.

Petrova fares better in her stealth-heavy missions, in part because of her enhanced manoeuvrability – she can climb specially marked walls and, hilariously, is the only one of the squad who can crawl through tiny passages like, uh… under an office desk – but largely because the level design of her missions is so much more interesting. She regularly finds herself in circular spaces that are built for moving around, not just pushing straight through. As a result, she’s presented with so many more opportunities to outflank, distract, double back and just generally adopt a more improvisational approach to the combat.

Despite a couple of the Russian levels breaking some new ground, for the most part Vanguard remains a series of narrow shooting galleries that you’ve seen and played countless times by now. Ultimately, like most Call of Duty games, you spend an awful lot of time crouched behind a waist-high wall, waiting to shoot a man in the head as he peers over his waist-high wall. That’s possibly a pointless criticism, but having just suffered through Call of Duty: Vanguard’s vacuous and derivative campaign, such a banal observation feels like the most fitting conclusion.

The PC version of Call of Duty: Vanguard was provided and played for the purposes of this review.