Born Punk review – Cyberpunk with a sense of humour

Born Punk is an easy sell as an adventure game, with a cyberpunk story that is alternately humorous and dark.
Meghann O'Neill 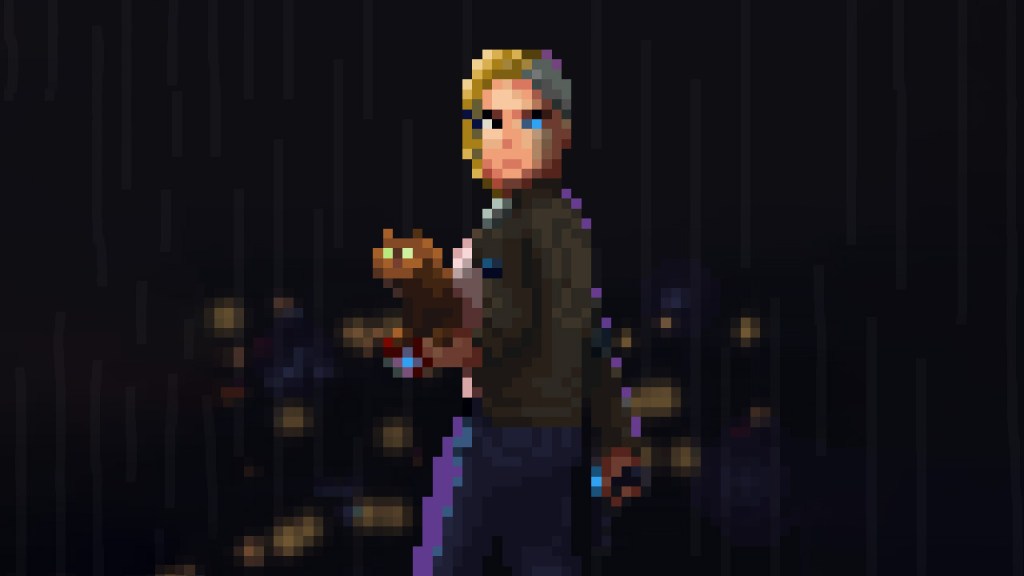 Point and click, cyberpunk, pixel art? Born Punk saw me coming. I loved it from the very first puzzle, which was to cure my hangover and find my ‘hand’, a futuristic appendage that combines tools for hacking with cybernetic claws. That Eevi can get drunk enough to misplace something so important tells us everything we need to know about this first of three protagonists. She’s irreverent, careless and, generally, a mess. (As well as being goofishly loveable.)

The story opens with humour, like meeting Eevi’s foster-father, a bartender whose dad jokes involve pulling silly faces with his ‘chameleon-eye’ – but, very quickly, the world darkens. Dystopian fiction is often distant and obscure, rather than relatable, but if you can decipher a baffling conversation with the (very high) kebab seller, you’ll learn that something terrible has happened to Finland, maybe more of Europe, seemingly at the hands of Russia. Oh, and the world’s remaining superpowers appear to be The American Remnant and Silkroad, which are believably ominous names, really.

Born Punk is set in Denmark, but its citizens are culturally diverse, as demonstrated by their accents, backstories and political values.

The game’s second protagonist is a mysterious body-hijacker, and I love the way they parse items that initially don’t make sense from their perspective, like how a ‘moveable, multi-material object’ is a wheeled office chair, as well as their persistent, inscrutable suspicion of the potted bonsai tree. Technically, they are two protagonists, as you can increasingly also make decisions on behalf of the hijacked body – thank goodness dialogue is distinguished by colour, or things would get confusing fast.

Grandmaster Flashdrive, the third protagonist, has a story arc that is truly hilarious, including a puzzle that involves hacking a ‘concert routine’ via mixing a song, based on obscure instructions from an entity that seems to have a vastly non-human appreciation of music. The fact that this entity is disguised as a sexy microphone, with a golden dollar sign dangling seductively from a lead around her stand, is just icing on an abundance of clever art.

The puzzles of Born Punk begin well, with each being structured inside short, sequential vignettes, requiring some combination of listening carefully, knowing what you need to find, combining inventory items and thinking laterally, in several steps. This complexity diminishes across the middle of the game, but I was so intrigued by the story, the faster pace worked for me. The last section of the game unfolds over multiple locations and involves all three protagonists, as a group, tackling some intriguing problems that require elaborate solutions.

There’s no hint system (something I personally think is important for accessibility) and I got stuck on a few puzzles in ways that were related more to the user interface, tutorialisation and forgetting what I was doing, than difficulty.

At an early point, I consulted an online guide that said I needed to examine a bottle (that I knew I needed) before I could take it but, somehow, I’d completely missed that ‘right mouse click’ was for an ‘examine’ interaction. I also didn’t understand how to open the inventory or access lore, Googling both before eventually finding a list of controls on the menu screen. The information was there, but I suppose I expect point-and-click adventure games to explicitly teach me the parameters of my interaction with them these days, because they’re all different. There’s also no diary, or log, of current objectives.

It’s interesting that the instructive elements lack detail, given that everything else is so carefully constructed. The music and sound, in particular, straddles the space between diegetic and underscore masterfully, with background tracks and songs on radios setting the tone for each scene, around buzzing drones and endless, driving rain. And the voice acting, including all the gags and comic timing, is strong, especially with respect to the demands of its nonlinear delivery.

I’d like to say that Born Punk concluded how it began, with humour and alcohol, but that’s not the case. The ending was bold, but inconclusive. I’ve definitely been on a journey from humble beginnings, through finding a community of powerful and unlikely friends, to somewhere entirely unexpected. But aside from a few general criticisms, like how Eevi’s hacking interactions were rarely used, the creators can firmly count me in for whatever is next. I’ll have more of the same, please.

The PC version of Born Punk was provided and played for the purposes of this review.