Kingdom Hearts is an impossible game that shouldn’t exist

Kingdom Hearts feels like a small miracle in an age where character rights are protected so fiercely.
Leah J. Williams 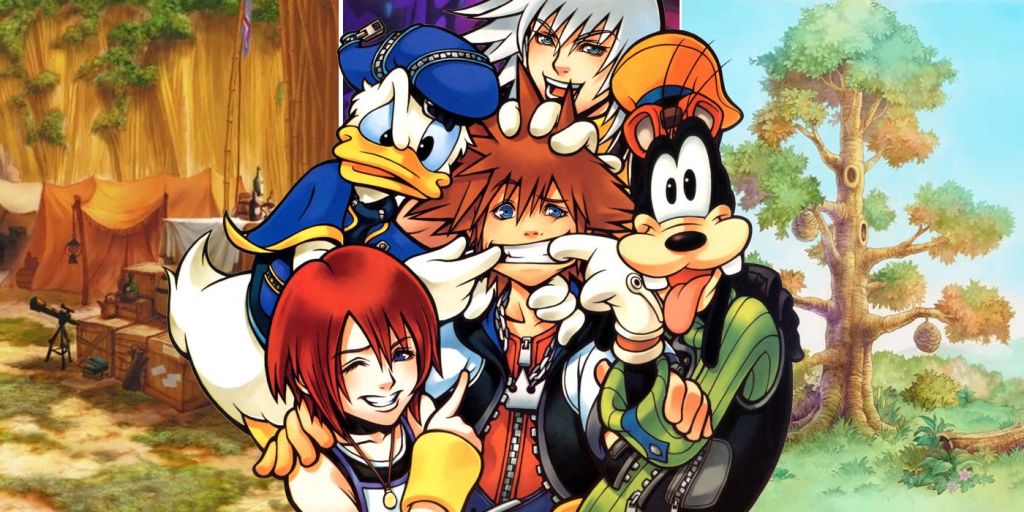 Disney and Square Enix’s Kingdom Hearts franchise has received renewed attention lately, thanks to the announcement of an upcoming sequel on modern consoles. For relapsed fans, or those who’ve never played the games before, the excitement over the continuation of the series is a chance to return to it – and to reevaluate its legacy. Revisiting the game in 2022 is a strange experience, but one that reveals just how groundbreaking and impossible the entire franchise really is.

The modern games industry is an oligopoly – a market ruled by a handful of major companies like Microsoft, Sony, Nintendo and Epic Games, all of which own a number of studios, thanks to mergers and acquisitions. Two decades ago, when Kingdom Hearts first launched on PlayStation 2, gaming was still a growing industry – and neither Square nor Disney were as prolific as they would later become.

In the early 2000s, Square was suffering major financial losses due to the poor critical reception for a number of projects, which led to the company selling Sony a near 20% stake in its business. Disney was in a similar financial position at the time, and turned to employee layoffs and cost-cutting from the film and Disney parks budgets to scrape back income lost during a major recession.

This was an era that feels far removed from the successful Disney of today – which has become a major global conglomerate that rules film and television, and has recently turned its attention back to conquering the video games market. Square has similarly grown since this era, having merged with fellow Japanese RPG giant Enix and becoming Square Enix – one of the largest game publishers in the world.

In a time when Square and Disney were both smaller and less financially stable, Shinji Hashimoto, a Square game producer, and Hironobu Sakaguchi, creator of Final Fantasy, turned their attention to creating an open world-style game that could be as successful and recognisable as Mario.

They reportedly came to the conclusion that only Disney characters could match the fame of the moustachioed plumber.

So history goes, Hashimoto reportedly encountered a high-ranking executive from Disney by chance, in an elevator in Japan – a meeting that led to further discussions about what a Square game starring Disney characters would look like. With the idea planted, Hashimoto brought on industry veteran Tetsuya Nomura to begin development of the game – and the rest was history.

The happenstance feels nearly impossible – and that feeling extends to the game itself. In any other period, in any other financial circumstance, it’s a very real possibility that Kingdom Hearts may never have happened at all.

Disney has traditionally been strict on character use

Disney has notoriously been very strict on usage of its characters, clamping down on fan art and its distribution, and even providing firm guidelines for how Disney employees can portray characters in its many global parks. As it’s grown into one of the largest companies on the planet, this grip has only tightened as the company began focussing on protecting its image.

Despite this, it appears Disney allowed Square much freedom in the creation of Kingdom Hearts. In an interview recorded by Kingdom Hearts Ultimania and preserved by the Wayback Machine, Nomura reportedly said the game creation process with Disney was ‘quite smooth’.

‘There weren’t any big restrictions or a set of guidelines we were given. Disney has its worlds already created, and there’s no reason for us to change that, so it wasn’t to a point where they had to lead us and take our hands,’ Nomura said. ‘The only thing we were careful of doing was staying within the characters’ established roles and what kind of dialog these characters should have. That’s something we all tried to stay within certain boundaries on.’

It was an experiment for both companies – and one that paid off in a major way. Since the initial game, there has been countless sequels, prequels and spin-offs. Kingdom Hearts merchandise is sold widely, and the franchise is held in a fond light overall.

Yet it seems like the game was birthed only by chance – and that it continues to exist only because of a brief willingness on Disney’s part to experiment with new forms of media, and third party partnerships.

Kingdom Hearts is a strange and uncanny franchise

It’s the structure and story where Kingdom Hearts shines – and while the remasters remove the game’s rough edges, it certainly doesn’t change the simple and effective the game’s kingdom-hopping game design.

Sora remains a loveable, innocent protagonist. The game’s major fight between light and darkness feels hopeful and sincere. There’s a light in Kingdom Hearts that shines through, and not even blocky video game graphics or boring Gummi Ship segments can dampen it.

It’s a strange game, but that’s part of what makes it so endearing. In no other franchise can you see Piglet from Winnie the Pooh and Sephiroth from Final Fantasy sharing meaty cameos. There’s no part of that concept that makes sense – it just shouldn’t work.

Yet Kingdom Hearts has a coherence and beauty that guides players directly from one Disney-inspired world to another.

In Kingdom Hearts 2, the tonal dissonance is even wilder. In one moment, players can be travelling through the colourful and gorgeous world of The Lion King, and in the next they’ll be in the lawless, photo-realistic town of Tortuga from Pirates of the Caribbean.

It’s tonally jarring, and very wild – but it fits into the mishmash world of Kingdom Hearts so well.

Strangely, it’s hard to imagine a similar collaboration taking place in modern times. Disney remains strict about its character usage – and competitors in the field rarely engage with the idea of crossovers. While Disney has dramatically softened modern media to the power of the crossover model, thanks to the blockbuster success of the Marvel Cinematic Universe (MCU), there still appears to be a reluctance in regards to different companies sharing resources and characters.

With major conglomerates now owning vast swathes of the media landscape, there’s almost no need for it – intercompany crossovers like Space Jam (which utilises Warner Bros.-owned properties) make far more sense than working with a third party company. Despite this, the Kingdom Hearts franchise persists.

This is likely down to a combination of factors: the strong working relationship between Square Enix and Disney, the overall success of the franchise to date, and the passionate audience that has been rapt by the world of Kingdom Hearts for more than two decades. Without these elements, it feels unlikely that a game like Kingdom Hearts would continue to exist in the modern era.

While companies working together is not unheard of in these times, the nature of modern copyright, licensing and international law means crossovers are extremely difficult and costly to organise. Businesses are now larger and more prominent, but competition now guides strict, financially-driven decisions. The race for ‘market share‘ is more important than synergy – and companies guard their secrets with intense interest, and the needs of their shareholders in mind.

In 2022, a game like Kingdom Hearts feels impossible. That the franchise is set to continue into the future feels similarly strange – though very welcome. But returning to the franchise in earnest now really makes you realise just how unique and puzzling its initial creation was. There are so many reasons why it shouldn’t exist – and yet, somehow, it defies all of them.

Kingdom Hearts was born in such a unique set of circumstances that it’s hard to imagine a game like this coming to fruition ever again. In light of that, it’s important to remember just how special the entire franchise remains.