Time has turned Ape Escape into a PS1 horror show 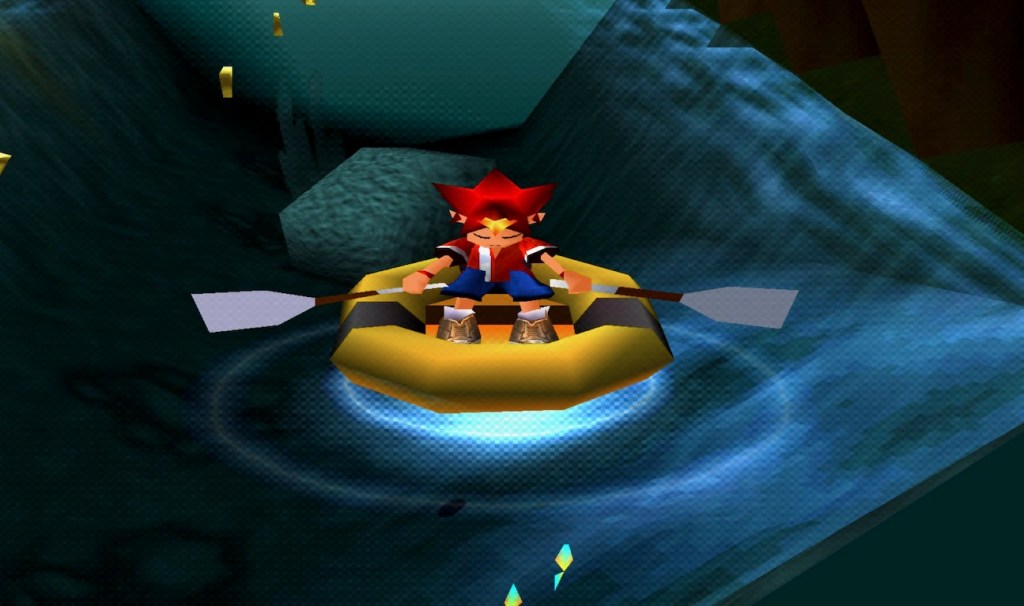 Tartarus, the hell of Greek mythology, is a gaping pit filled with darkness – a place where untold horrors are hidden between shadows too dark for the human eye to see. We fear the dark because of its hideous potential, because we don’t know what hides within realms we shouldn’t see. Occupying Tartarus would be skin-crawling, with the darkness encouraging tricks of the imagination – just like playing classic PS1 platformer Ape Escape in 2022.

Ape Escape has not aged gracefully, despite being a wholesome adventure about a young boy catching monkeys and exploring strange periods in time. While a lens of nostalgia buoys its appeal, the early 3D graphics of this game now create a strange, intangible dissonance.

Video game technology has evolved so rapidly in the last two decades that Ape Escape seems prehistoric, a semi-broken relic of an experimental era in gaming.

The rough edges are particularly uncanny, with every camera twitch causing texture glitches and disappearances that reveal the ‘bones’ of the game’s world. If you dive too deep underwater, the bottom of the ocean becomes invisible, and you can see all the way to the game’s own version of Tartatus – the gaping pit beneath the world’s polygons.

You can also see these bones if you move the camera too close to a cliff – often, the view clips through to the other side and reveals strangle shapes where hills or towers should be. These objects are usually blacked out – they’re something players are not meant to see. A glimpse into something forbidden.

These sudden camera swings also cause changes to the environment of the world. At a distance, textures are only partially visible. Get close, and they fade into view – a result of PS1-era technical limitations. When you view these textures through the camera lens, they can clip suddenly in and out of view, producing a strange flashing effect that makes even watching Ape Escape a headache-inducing exercise.

It frequently reminds you that the world of the game is manufactured – and gives the odd sense that the floor may disappear at any stage, plunging you into Tartarus.

The odd texturing extends to characters in the game, with monkey character models looking particularly rough. The game tends to load complex textures only within a small radius, meaning that monkeys standing somewhat close by can still exhibit skeletal features, bugged-out eyes, and unsightly, gangly limbs.

That’s not to mention that moments of outright horror – moments designed to be scary – are amplified tenfold by the rickety nature of the game, which feels barely held together in some parts.

Dark corridors are made even darker and more ominous by blocky shadows. Fire demons leer with bright, frighteningly large eyes. The strange, compressed sounds of monkey radars and oxygen metres sound like they’re emanating from an empty room. The shrieks of the monkeys are similarly strangled.

When you teeter off the edge of a stage, an endless pit beckons above and below – with skies made of textures taken from real-life photographs of forests, jungles and caverns creating another haunting disconnect.

There’s also true horror to be found in one distinct level: Thick Jungle.

In this seemingly placid setting, you can eventually find a giant fish lurking within the dark water, waiting to electrify you if you fall out of your boat. The fish takes up most of the screen – and yet always seems to lurk on the edges of your vision, thanks to the game’s sticky camera, which never seems to be where it’s supposed to.

The boat controls also aren’t particularly attuned, and it’s easy to fall off the side if you forget which buttons to use, with the giant fish waiting to fry you alive on every paddle.

For a title marketed as a wholesome game for kids, it’s an extremely panicking experience.

The jerky camera, combined with unrefined controls, gives the action a real sense of foreboding, whether you’re just trying to cross a stream, or avoid the terrifying fish beneath the lake. Your input doesn’t quite feel connected to the visuals onscreen either, with latency making each movement far more unresponsive and terrifying than it should be. (The game also runs in PAL format in Australia, which results in a notably lower refresh rate, and jankier on-screen movement.)

Modern video games tend to give the impression of being finely polished. While many contain bugs, it’s rare to see the seams that show how their worlds have been cobbled together. Cameras usually follow the rules, and textures tend to behave. The secrets of development are usually hiding beyond the reach of the average player.

In Ape Escape, every lovingly-placed model draws attention to itself. Every seam is clear – between rock faces, below oceans, and even on monkey limbs. The game is like a patchwork quilt, where the many smaller parts come together to form new patterns and pretty pictures, even as threads start to fray.

While Ape Escape retains its sense of adventure and fun, it’s also gained a deep and unsettling feeling in the transition to modern consoles. It was an essential game of its era, and one that pushed 3D graphics as well as controller capabilities to their limits – it was the first PlayStation game to require the analog sticks of the DualShock. But it’s also fair to say that the game has aged poorly.

Ape Escape has been transformed to the point where its uncanniness has become laced with a real sense of horror. While it was never designed to be a truly frightening game, context and time have not been terribly kind. Should you choose to revisit Ape Escape on the all-new PlayStation Plus, be aware of the latent terror that lurks.