Sora, the protagonist from Square Enix and Disney's Kingdom Hearts series, was announced as the 89th and final character for Super Smash Bros. Ultimate.
Chris Button 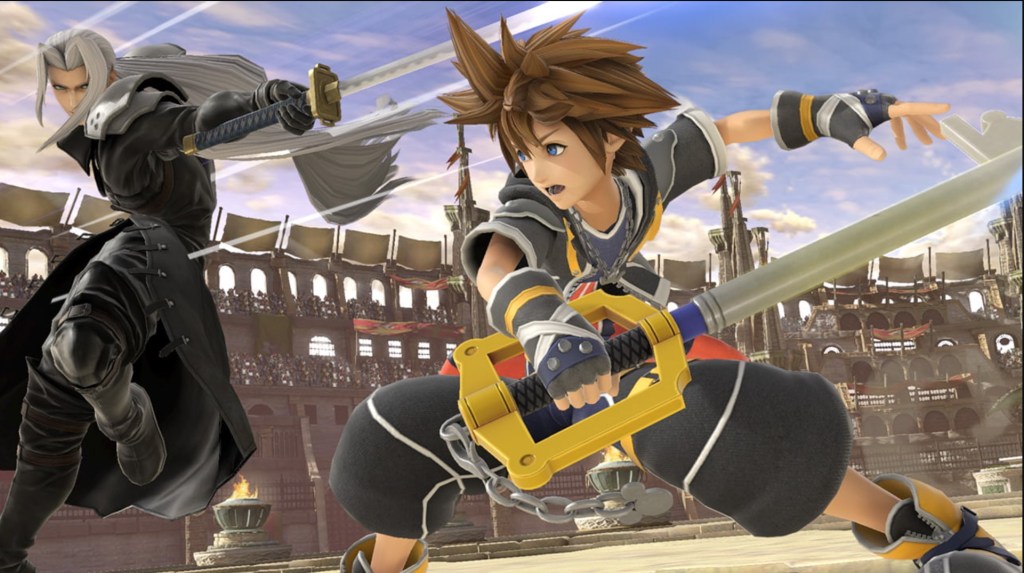 Sora and Sephiroth are only part of the Square Enix contingent in Smash Bros. Ultimate Image: Nintendo

Sakurai revealed Sora as the last fighter in a video update, demonstrating the character’s in-game abilities.

In a peek behind Nintendo’s highly guarded curtain, series director Masahiro Sakurai revealed Sora was the most-requested character by fans following an official poll during the release of Super Smash Bros. for the Wii U and 3DS consoles around 2014.

After consulting with the late Satoru Iwata – who was Nintendo’s president from 2002 until he passed away in 2015 – the Smash team decided not to publish the poll results as not to place undue pressure on the various developers and companies involved.

Since Tekken‘s Kazuya Mishima joined the Smash Bros. roster following Nintendo’s 2021 E3 presentation, speculation was rife about who would join the game in the final update.

The Kingdom Hearts character will be available as paid content on 19 October, which can be purchased individually for $7.80AUD, or included within the Super Smash Bros. Ultimate: Fighters Pass Vol. 2 for $39AUD. The latter option also includes Min Min from ARMS, Steve and Alex from Minecraft, Sephiroth from Final Fantasy VII, Pyra and Mythra from Xenoblade Chronicles 2, and Tekken‘s Kazuya.

Sakurai explained the word ‘sora’ means ‘sky’, which is reflected in Sora’s aerial aptitude. Capable of travelling great distances in the air while wielding various Final Fantasy-themed magic spells through his Keyblade, Sora’s lightweight and floaty nature is his greatest strength and weakness.

He’s easily launched off-stage by opponents but can recover from danger better than most other characters. A lot of work went into designing Sora and his costume variants representing different Kingdom Hearts entries, alongside nine music tracks and the Hollow Bastion stage joining Smash.

The first Kingdom Hearts game was an action RPG on the PlayStation 2 back in 2002, which saw Sora team up with Disney’s Donald Duck and Goofy to find King Mickey Mouse, who had gone missing to deal with dark beings known as the ‘Heartless’. The crew travelled to various Disney locations in addition to original worlds populated by Final Fantasy characters, recruiting new teammates along the way. Several spin-offs and mainline games later – the most recent being 2019’s Kingdom Hearts III – the series is infamous for its convoluted plot about restoring hearts: both metaphorically and literally.

Included in the presentation was the news that the Kingdom Hearts games are coming to Nintendo Switch in the future, albeit in cloud streaming form, which doesn’t have strong support in Australia.

Alongside Sora’s reveal, Sakurai also showed off three new Mii Fighter costumes: Octoling and Judd from the Splatoon series, and Doom Slayer from the first-person shooter Doom franchise. Each costume will be available for $1.05 individually at the same time as the Sora update.

When Sora joins Super Smash Bros. Ultimate on 19 October, he will mark the 89th fighter to join the game since its December 2018 launch. Add in 116 stages, 2,200 characters from more than 450 games represented in various forms, and over 2.2 billion hours of gameplay worldwide – that’s a lot of work involved.

With no more updates planned for Super Smash Bros. Ultimate, Sakurai and his team can finally get some rest. They’ve earned it.