The modding community is at it again, creating a lasagne-loving reskin of Stray's protagonist for PC players.
Emily Spindler 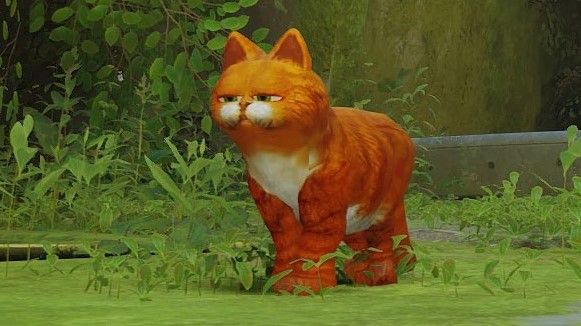 In an interesting turn of events that should surprise nobody, the game modding community has been hard at work creating a whole host of interesting mods for the recently-released adventure game, Stray. If you wondered what it might be like to play the widely celebrated title as Garfield, or as CJ from San Andreas, there’s a mod for that.

Modder Chris Rubino released the Garfield mod, which sees the playable cat replaced by an oddly not-so-out-of-place version of Garfield. The simple change has been downloaded by over 1,000 users since it was published, plastering the lasagne-loving cat’s chronically dissatisfied expression on screens around the world.

It’s one of many mods releasing as Stray enters its second week since release, with a number of them just as left of field. Other standouts include the option to change the cat into a quadrupedal version of CJ from San Andreas, and to replace the often-pressed meow button with the sound of Ethan Mars from Heavy Rain shouting for his son. A number of less outlandish mods, such as those that change the cat to look like your own and a photorealistic preset have been released as well.

The sheer amount of creations so soon after release is a testament to the success that Annapurna Interactive and BlueTwelve Studio’s newest title is enjoying – in the three hours after release, there were 62,963 concurrent players on Steam, making it one of the company’s most successful games to date. Stray currently sits as the highest-rated game by Steam users for 2022, overtaking God of War with over 42,000 reviews to date.

The growing community rallying behind the adorable (and surprisingly emotional and tense) game seems set on improving upon an already much-loved story, and we can expect to see more interesting reimaginings of the game and quality of life mods crop up as time goes on.

Whether you’re wanting to play the original game and explore the cyberpunk-style world from a cat’s perspective, or befriend humanoid robots while wearing a distinguished pair of glasses, Stray certainly has all bases covered.