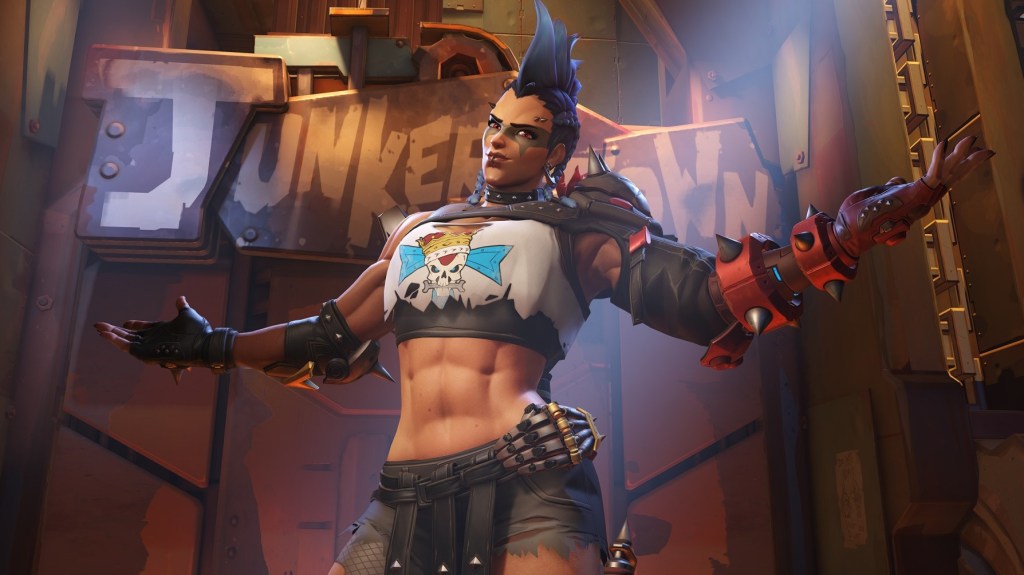 Overwatch 2 is the follow-up to Blizzard’s multiplayer hero shooter that launched in 2016 and, more than anything, cemented its motley crew of characters into the collective gaming consciousness.

The sequel’s new tank-class hero, Odessa ‘Dez’ Stone (aka Junker Queen), is one of the latest to join their ranks. Armed with an axe called ‘Carnage’ and a knife named ‘Gracie’, Blizzard describes Junker Queen as a ‘tough, almost brutal, personality.’ But the voice behind her couldn’t be more diametrically opposed.

Bringing the ruler of Junkertown to life is Australian-Sri Lankan actress, Leah de Niese. de Niese smiles as she recounts meeting some of the Blizzard team for the first time, saying: ‘They were like, “Oh, your normal voice is very different to the Queen.” I like to think that I keep my aggression behind closed doors in real life!’

Perhaps best known to Australian television audiences as Nicola from House Husbands or Odile from Offspring, de Niese actually started her professional career at age seven — as one of the Munchkins in a production of The Wizard of Oz. Despite her long and varied career, Overwatch 2 marks not only her first video game role, but also her first voice acting role. A real ‘double-whammy’, in her words.

So how did landing a role in Blizzard’s mega-franchise come to be? de Niese reflects she’d always wanted to try voice-over work and had ‘dabbled in putting down a demo here or there.’ When this particular audition came through from her UK team, she committed to giving it her all, albeit with some naivety.

‘I didn’t have a home studio, I didn’t have a special microphone — I actually did the audition like an audition for film or TV, but I’ve since learnt you don’t need to be on camera for a voice audition,’ she recounts with some embarrassment.

‘But you know what? I think that’s part of what helped me … Our amazing casting director Andrea [Toyias] loves to tell me that it was, in fact, seeing me physically step into this epic character that helped her see me as the Queen.’

When de Niese later found out what she was auditioning for, she was ‘straight on the internet.’

‘It was a jaw-drop moment of, “Oh… this is one of the biggest games in the world”. So that was overwhelming. And exciting. But I think it worked in my favour not being too ensconced in the world already’, she muses.

The audition process was long. As de Niese explains, ‘[Blizzard] are very focused on getting the right actors voicing these characters – there’s real care taken. It was extended over about six months and I had several callbacks.’

While a ‘nerve-wracking’ affair, de Niese recognises how important it was, saying: ‘Once it came to officially being offered, I’d really found my idea of what this character journey was going to be’.

When it then came time to jump into the studio as Junker Queen, de Niese chose to own her lack of experience and turn to the team for direction. ‘It was really important for me to be straight-up and say, “Hey, I’m a newbie, guide me on this,”‘ she says. ‘I was nervous because I wasn’t as confident in the gaming world’, she recalls. ‘The team at Blizzard were truly unbelievable. From the get-go, it was very nurturing and very important to have both of our voices heard.’

However, de Niese soon found herself becoming an invaluable resource to the team themselves — especially in regards to making Junker Queen as authentically Aussie as possible. ‘Being able to shift the language to reflect Australian-isms was really important and they were very welcoming of that’, she describes. ‘It is scary though because suddenly you have the weight of Australia on your shoulders!’

A new audience following de Niese on social media has noted how energising it’s been to see the gaming world through fresh eyes. In a way, the Overwatch 2 community has had a chance to rekindle their love for the universe again — helpful, given the six-year gap between the first title and this one, and everything that’s happened in between.

For de Niese, this seems to be a genuine joy: ‘I love that I can be this fresh set of eyes coming in and helping the community rediscover how exciting and important this game is.’

We can expect to hear more of de Niese and Junker Queen as Blizzard continue to flesh out the characters and story world. When asked if she now has any advice for aspiring voice actors, she enthuses, ‘Go for it! Find out what you can about the different ways in — obviously, there’s a path through finding an agent. Play with your voice as well. That’s part of what I’ve done throughout my whole career: putting on silly voices and pulling faces in the mirror. Learn vocal training. Learn how to breathe properly and use your diaphragm … But go for it!’

Read: Behind the pioneering animation of the Overwatch cinematic universe

Overwatch 2 launches on 4 October 2022 and will be available on PC via Battle.net, Xbox One, Xbox Series X/S, Playstation 4, PlayStation 5, and Nintendo Switch.