With this new contract, Microsoft is set to fortify its position as one of the highest value US defence contractors alongside Amazon, write Ben Egliston and Marcus Carter.
The Conversation 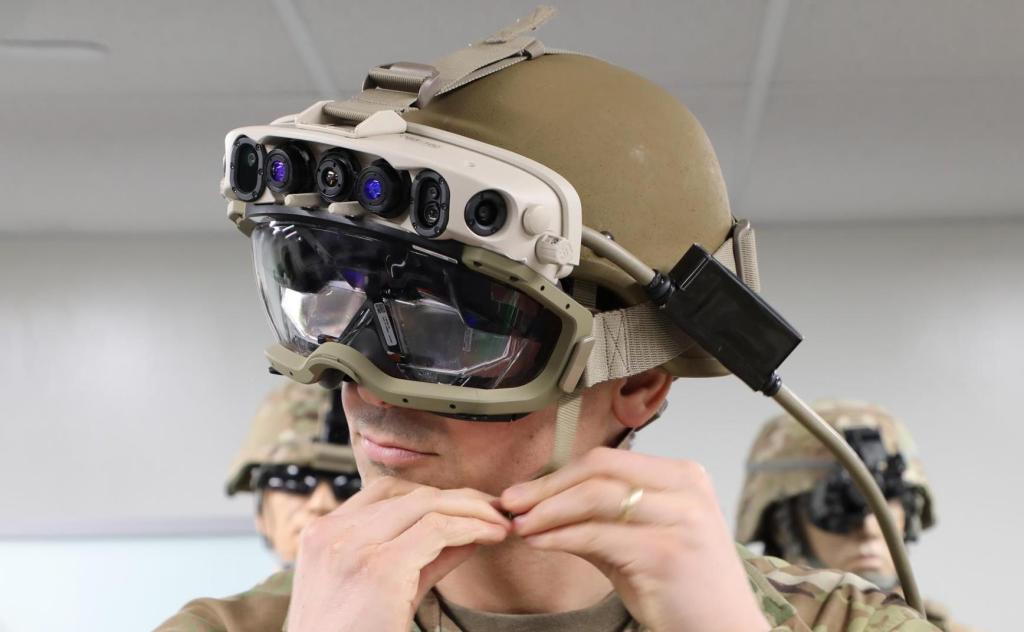 Microsoft has reportedly been awarded a ten-year contract worth close to US$22 billion, to provide 120,000 military-grade augmented reality (AR) headsets to the US Army.

Popularised through mobile apps such as Pokémon Go and face filters on social media, AR technology is fundamentally about superimposing digital images over real-world environments.

The AR interface commissioned by the US military is referred to as an ‘Integrated Visual Augmentation System’ (IVAS). It will use Microsoft’s HoloLens headset technology as its base hardware.

As the Army’s press release notes, the device will be used to coordinate soldiers and implement sensing technologies on the battlefield.

The news follows Microsoft’s previous announcement of a US$480 million military contract to develop and supply IVAS prototypes to the army in 2018.

Between this older contract, the new one, and Microsoft’s $10b JEDI cloud computing contract for Azure, Microsoft is set to fortify its position as one of the highest value US defence contractors (alongside Amazon).

AR interfaces first emerged in the 1960s with Ivan Sutherland’s demonstration of the Sword of Damocles tracking system. This was developed in the Massachusetts Institute of Technology’s Lincoln Laboratory, funded by the US Department of Defence.

The head-mounted display – the first of its kind – was pitched for use in simulating flight instruments and conditions.

Fast forward to the mid-80s and the Lincoln Lab produced American AR manufacturer Kopin. In 1990 this commercial company received a US$50 million contract from the Department of Defence to develop micro LCDs to be used in wearable computers for the infantry.

AR continues to see uptake today, in a trend which geographer Stephen Graham refers to as the ‘militarisation’ of everyday life. And this is especially noticeable with technologies governing urban societies.

Technology firm Vuzix is one major player in the security and enterprise sector. As its annual report states, the company develops products for ‘governmental entity customers that primarily provide security and defence services, including police, fire fighters, EMTs, other first responders, and homeland and border security’.

In one particularly troubling development, last year it was reported that ClearView AI’s facial recognition software was being tested to run on Vuzix hardware.

‘Soldier lethality will be vastly improved through cognitive training and advanced sensors, enabling squads to be the first to detect, decide and engage. Accelerated development of these capabilities is necessary to recover and maintain overmatch.’

This controversial company trains its artificial intelligence software on a dataset of more than three billion images from websites including YouTube, Facebook and Instagram. Its marriage with Vuzix points to a future where law enforcement officers use wearable AR with built-in facial recognition capabilities.

The use of AR to govern everyday life has also emerged during the COVID-19 pandemic (which we’ve detailed in this report). For example, companies such as Rokid and KC Wearables have developed wearable devices that purport to track the body temperatures of people in the view of the device’s wearer.

What’s so bad about Microsoft’s AR?

We know little about the current prototyping and field testing of Microsoft’s IVAS. But the interface raises the same concerns that surround other technologies designed to preemptively target and classify potential ‘threats’ – such as drones.

This is what the current IVAS prototype looks like. Image: Microsoft

As the US Army’s IVAS objectives read, key outcomes are to increase mobility, situational awareness and lethality – that is, deadliness on the battlefield. The document states:

‘Soldier lethality will be vastly improved through cognitive training and advanced sensors, enabling squads to be the first to detect, decide and engage. Accelerated development of these capabilities is necessary to recover and maintain overmatch.’

The objectives are framed around soldiers’ efficiency, coordination and safety. This is similar to the usual framing of other predictive sensing technologies, including facial recognition.

The reality, however, is there would be potentially disastrous outcomes if such a system were to misidentify a target. In a 2019 CNN interview, Microsoft CEO Satya Nadella tried to play down concerns.

‘We made a principled decision that we’re not going to withhold technology from institutions that we have elected in democracies to protect the freedoms we enjoy,’ he said. His statement failed to acknowledge the potential risk which may result from the military’s use of AR.

Following Microsoft’s initial IVAS contract in 2018, Microsoft employees wrote a letter to company executives opposing the use of AR for warfare.

While the letter itself was ineffectual, the recent rise of collective worker resistance in Silicon Valley shows promise. More strikes and walkouts in response to unethical developments could help push back against big tech’s self-serving visions of the future.

Similar to virtual reality, AR has so far enjoyed cover from critique by being taken as a benign gaming or entertainment technology.

The latest IVAS contract is an urgent reminder that developments in this technology should be taken seriously. And its potential for harm must not be downplayed.