You need to play Klifur, the wacky rock climbing game 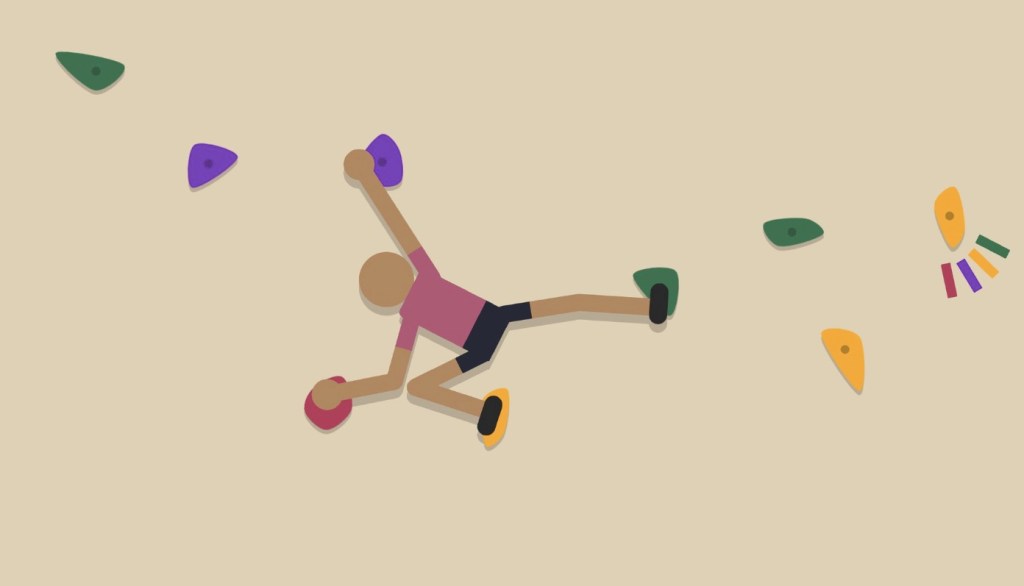 Klifur, named after the Icelandic word for ‘climbing’, is based on a simple premise. You are a rock climber attempting to scale great heights, maintaining your balance on coloured footholds and using the length of your limbs to advance. There’s no real plot or story behind the game, but it hardly matters – the gameplay loop and mechanics are so satisfying that you’ll find yourself lost in its minimalist world within minutes of starting your first climb.

It takes some time to grasp the basic principles of Klifur as the game doesn’t go out of its way to instruct you, but that leaves room for experimentation and eventual understanding that at least one hand is always required to maintain balance on the game’s grips while you twist and pull your way around each course.

Some grips let you place multiple limbs at a time, while others require you to dismount and remount based on where your legs and arms are placed. In some ways, the game is a bit reminiscent of early internet hit QWOP, or more specifically its sequel GIRP, both of which require players to maintain control of each separate limb to move in a running race and scale a mountain, respectively.

In this game, movement requires finesse and control – but the game’s wacky physics do occasionally provide a gravity-defying advantage. Plan your moves well, and a swing can shoot your climber up several inches further than they would normally go, creating an opening for a grip on a distant rock. If you lose too much momentum puzzles can be unsolvable, but with an encouraging gameplay loop – the game immediately loads you back into the action if you fall – you can keep trying until you succeed.

You need to be constantly thinking ahead in Klifur. If you take one hand off a particular rock, how will your body swing? Will you still have at least one hand gripping a rock to maintain balance? Will your legs swing out and slow your momentum?

There’s a real flow to the game’s movement, and while the action is fairly simplistic, there’s also a real sense of satisfaction to be had from completing each course. There are only 12 challenges in total, but that hardly matters when each is so involving – and when you consider that this delightful experience is currently available for free on Itch.io.

‘There are lots of possible routes through each level and they aren’t all that hard to find but you do need to understand how to navigate all these constraints,’ developer Torfi said of the project on Twitter. ‘But what I really love about this game is how dynamic and surprisingly life-like the motion of the climber often feels given how simple the setup is. I love the ridiculous stretched poses you end up in. I love how you often have to think about your momentum to swing onto a hold.’

‘I often think about how games I really like are usually built around exploring just one new or interesting idea. I try to think about what “the one idea” is for each game I make and for this one it’s simply the way this character moves.’

While Klifur is only a small experiment for now, it boasts plenty of potential. With the game now receiving major attention online, there’s hope it will expand further in future. For now, it remains a free and wonderful offering that’s great for a short brain break.

Klifur is now available to play via Itch.io.