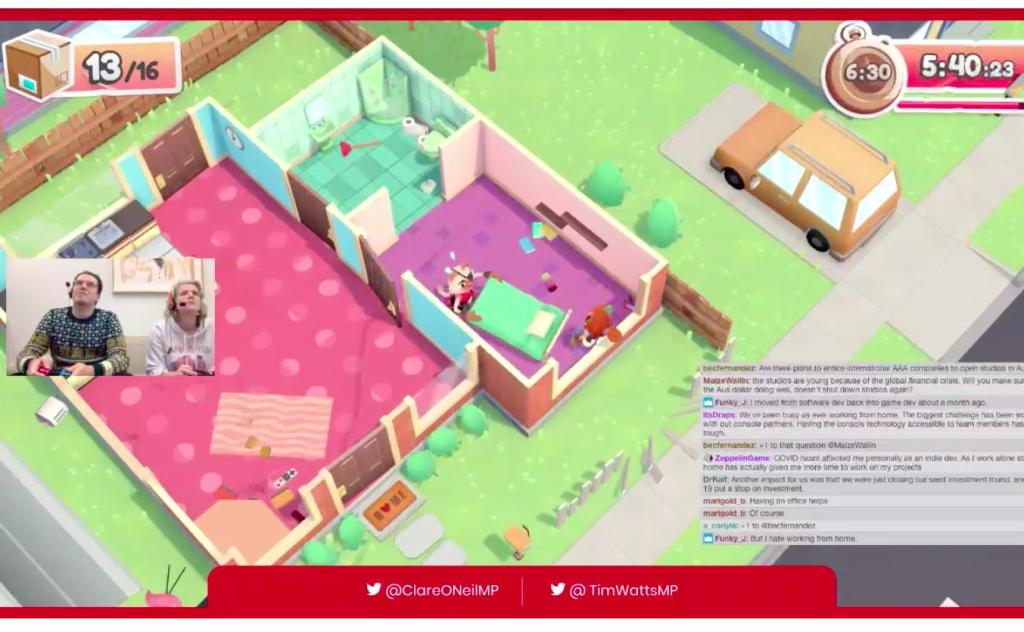 The stream suggests a bright future for co-operation between games industry and federal Labor government. Image via TimWattsMP on Twitch.

On Wednesday night Clare O’Neil, the Shadow Minister for Innovation, Technology and the Future of Work, joined Shadow Assistant Minister for Communications and Cyber Security Tim Watts on a Twitch livestream while playing chaotic local title, Moving Out.

While navigating two cartoon movers between a house and a truck, with O’Neil joking that Parliament could learn a lesson or two from its cooperative format, the two MPs responded to questions and comments from game devs in the Twitch livestream. While a games livestream is far from being a form of consultation, its focus was clear: to establish a dialogue between game developers and federal government.

The pair touched on a range of other industry-focussed topics over the course of the hour-long stream, from regulating loot boxes and other microtransactions, esports, federal funding, and supporting the career pipeline of experienced Australian game devs, so they will stay in (or return to) Australia.

Read More: How Has COVID-19 affected the Australian games industry?

While the conversation stayed relatively surface-level, both MPs demonstrated an informed engagement in the industry. Watts spoke on his history advocating for games classification reform, a pressing issue that sees many titles never released in Australia at all, while he worked in the telecommunications sector. He argued that the current classification process for games, which is notoriously filled with idiosyncratic caveats and punishing financial hurdles, is a vestige of ‘moral panic’ that should be a thing of the past.

This Twitch stream marked something of a turning point; the two ministers chose a forum for consultation that is widely accessible, and already familiar, and while the format was light, the conversation was serious. O’Neil signalled an interest in running future livestreams, suggesting that in future, they set more specific subjects beforehand, to give both MPs time to research, and allow for deeper conversation.

As Watts said: ‘The point of having a stream like this is to signal that I take things seriously.’

Watts also spoke openly about the fact that the federal government had often failed to engage meaningfully in supporting local industry, validating the experience that industry bodies have spoken to for some time: that games as an industry has lacked specific support: ‘I’ve heard some horrible stories about game dev companies coming to Canberra to try a hearing, and IGEA is knocking on the door constantly, and has been for years — and that’s a good thing! But they shouldn’t have to be bashing down doors; they should be welcomed in!’

The outreach was warmly met by the local games industry, who flocked to the chat with questions and comments, keen for the chance to engage directly with members of parliament. After Labor committed to reinstating the Interactive Games Fund during their election campaign last year, it seems there are growing signs of genuine engagement with Australia’s geographically isolated, small, but creatively powerful games industry. Maybe the establishment of accessible open lines of communication like these are the first cracks in the door.