Trolli has created a Halo ‘Feedler’ that shoots gummy worms

The Feedler gun will shoot Trolli worms into the mouths of 'enemy targets' at the Halo World Championship.
Leah J. Williams 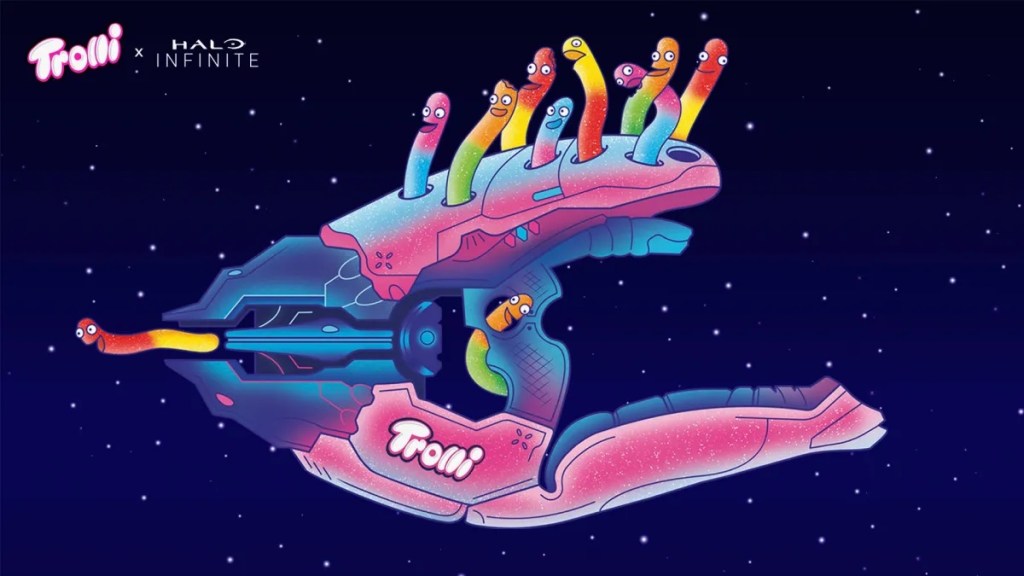 Trolli and the team behind Halo Infinite have announced a wild collaboration that needs to be seen to be believed – a real-world ‘Feedler’ replica gun that shoots gummy worms, rather than deadly crystal shards. This creation is a play on the iconic Needler gun from Halo – but it’s frankly better in every way. The gun will make its debut at the Halo World Championship in Seattle, taking place over the weekend, and will be available to crowds attending the official Trolli booth.

According to a press release announcing the Feedler activation, attendees will not only get the chance to eat Trolli worms directly from the Feedler gun, they’ll also be able to wield it against ‘enemy targets’ and unleash the full wrath of the gummy worms for themselves. The gun is completely functional, and should shoot worms at a high velocity.

Anyone who pops into the booth to check out the Feedler will also have a chance to win limited edition Halo Infinite x Trolli goodies – including lolly bags, and in-game items for use in Halo Infinite multiplayer.

‘The “Feedler” is the perfect representation of the partnership between Trolli, the sour gummi brand known for shining its neon light into the gaming world, and Halo, known for its 20 years of steadfast heroism and beloved sci-fi weapon sandbox,’ Marcos Waltenberg, Director, Xbox Global Partnerships said of the gun’s creation.

In addition to the Feedler, the companies are currently offering a number of limited edition gummy packets featuring Trolli flavours and Halo packages: Original Sour Brite Crawlers, Very Berry Sour Brite Crawlers, Sour Gummi Creations, and Sour Bursting Crawlers. As of writing, they don’t appear to be available in Australia or regions outside the United States – but keep an eye out in future.

The Feedler and its Trolli ammo may be one-off exclusives for the Halo World Championship, but there’s high hopes it will eventually do the rounds of global markets. As one of the wilder ideas to come from Xbox marketing in recent years, it deserves time in a brighter, shinier spotlight.