EA has finally released a statement in support of Pride following a strange period of silence and controversy.
Leah J. Williams 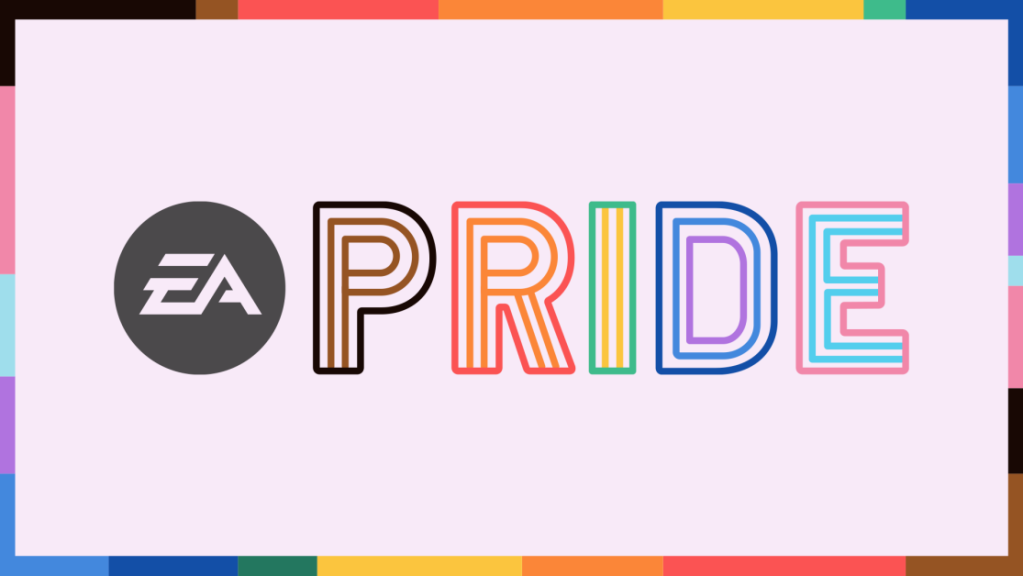 EA has released a statement to celebrate Pride Month, while reiterating the company’s support for women’s rights and trans rights, following a strange period of silence from the company. Controversy has reportedly grown behind the scenes at EA over the last month due to the company refusing to comment on the unfolding push in the US to reduce abortion rights.

In late May, EA reportedly told employees in a town hall meeting that it couldn’t take a public stance against this attack of human rights due to the company being ‘inclusive of all points of view‘. According to sources speaking to Kotaku, EA’s Chief People Officer Mala Singh said that the company would only speak out when it will ‘actually have a positive impact’ and when sentiment is ‘consistent’ across all 13,000 employees around the world.

It appeared that the company would not comment on these issues – despite the imbalance between the ‘diverse views’ it was alleged to support. In the abortion debate, the ‘two sides’ are essentially: ‘Should people have autonomy over their own bodies?’ or ‘Should people be forced against their will to carry unwanted babies to term?’

It’s not a debate at all – the push to remove abortion rights infringes directly on human rights.

The silence on this issue reportedly enraged EA employees, and when Pride Month hit with no official statement or support for LGBTQ+ individuals, many threatened to walk out. Statements seen by GamesIndustry.biz indicate staff were planning to protest EA’s choice of neutrality, particularly if the company was to ‘rainbow-wash‘ its logo for the month without tangible action.

EA had previously declared it would only take a stance on public issues if they were ‘inclusive of all points of view’ however, a new company-wide statement was made after this walk out threat. In it, EA outlined what social media managers can and can’t post during Pride Month, and indicated it would ‘ensure [its] efforts to celebrate pride are meaningful.’

That said, guidelines viewed by GamesIndustry.biz indicated that messages and graphics shared could not be ‘political’ in nature – despite the LGBTQ+ community often facing politically-charged discrimination. In the search for ‘meaningful’ efforts to celebrate pride, the company essentially neutered the impact of social posts.

Staff members reportedly told GamesIndustry.biz they felt the message was ‘hectic’ and ‘haphazardly put together’ in order to avoid the strike – and now, the company has gone a step further to placate staff, even seeming to renege on its previous stance of not commenting unless the sentiment is ‘inclusive of all points of view’.

On 3 June, the company issued an official Pride Month statement that acknowledged the extreme fear and terror that LGBTQ+ individuals face in light of government legislation around the world, and stated the company would continue to support employees and queer communities even as their human rights were attacked.

‘I want to acknowledge the pain and fear that our LGBTQ+, specifically our Transgender community, is experiencing in light of emerging legislation in the US and the ongoing attacks on their human rights,’ Mala Singh said.

Singh seemed to walk back the comments that had been shared with Kotaku, and reinforced that the company is not stepping back from its support of the LGBTQ+ community, despite ‘how [the earlier comments] landed for members of this community’.

To end the statement, Singh detailed EA’s current work in the LGBTQ+ space, including its TeaTalks and Pride Hangouts initiatives, as well as its support for organisations like the ACLU, GLAAD, the Human Rights Campaign, Out and Equal, and the National Center for Transgender Quality. Singh also made clear that EA has co-signed the HRC Business Statement that opposed discriminatory laws and policies introduced in Texas and elsewhere, affirming its support of all human rights.

It’s unclear at this stage why the company refused to comment on the alleged plans to repeal abortion rights in the United States, given other game companies had no issues taking a public stance, but it appears EA has now listened to the concerns of employees, and made essential changes to its communications strategy.

The firm stance for trans rights and women’s rights is certainly appreciated – but it’s concerning that it seemingly took major, publicly shared backlash from employees before an official statement was penned.