More details about Playdate, an experimental handheld videogame console have been unveiled including games, price, and release date.
Chris Button 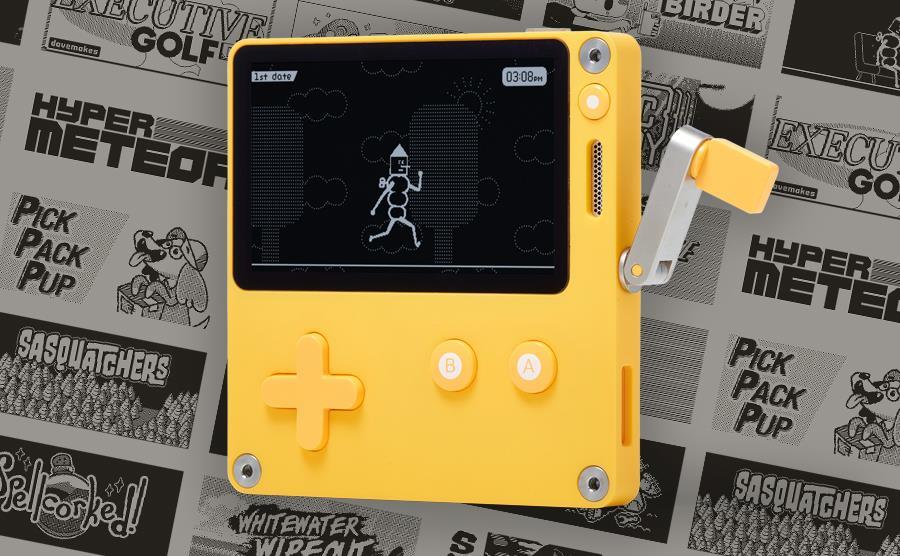 Looking somewhat like a tiny Game Boy with a rotating crank fixed to the side, Playdate is quite unlike any videogame hardware we’ve seen. Coupling minimal inputs with a monochrome 1-bit display, Playdate doesn’t seek to push technological limits or compete at the cutting edge of gaming. Instead, the bright-yellow gadget encourages developers to push its own technical limitations to make something creative, including games that perhaps wouldn’t be possible without an old-fashioned crank input. Although unassuming, Playdate does include some modern design conventions, such as Wi-Fi and Bluetooth connectivity, plus an accelerometer to open up motion control possibilities.

With the Playdate update, Panic promised a suite of 24 bespoke games to release on a weekly schedule following the hardware’s launch, which the company refers to as a ‘season’, akin to waiting each week for a new television episode to air. Playdate’s first season encompasses the announced 24 games, with two games to be delivered via Wi-Fi each week for 12 weeks–all included in the $179 USD (approximately $230 AUD) price of the console.

Panic has assembled an impressive cast of developers, from diverse independent teams, to notable names including Zach Gage (Good Sudoku, Really Bad Chess) and Lucas Pope (Return of the Obra Dinn). New York-based Australian game designer Bennett Foddy (Bennett Foddy’s Getting Over It, QWOP) is among the developers creating Playdate games, with Zipper announced as a season one title. Across the Tasman, London-based New Zealand writer Duncan Fyfe (Neo Cab, Where the Water Tastes Like Wine) is part of the team behind Demon Quest 85, a visual novel also scheduled for Playdate season one.

Arguably one of Playdate’s most interesting features is that every console is a fully functioning development kit. Anyone with access to a Playdate can create games for the device through using programming know-how, or with ‘Pulp’, a browser-based game editor which doesn’t require any coding knowledge whatsoever.

Pre-orders for the Playdate open up in July, although this won’t guarantee immediate shipment. Pandemic-impacted global supply chains means Panic will ship devices as they are made, notifying consumers a week in advance of the impending delivery, with the option to cancel pre-orders at any time.

Playdate may look gimmicky in nature, but upcoming games such as Crankin’s Time Travel Adventure look like fascinating concepts only possible with the unique crank-based controls.