Tiny Tina's Wonderlands buzzes with the same charm that made Borderlands fans fall in love with the franchise.
Leah J. Williams 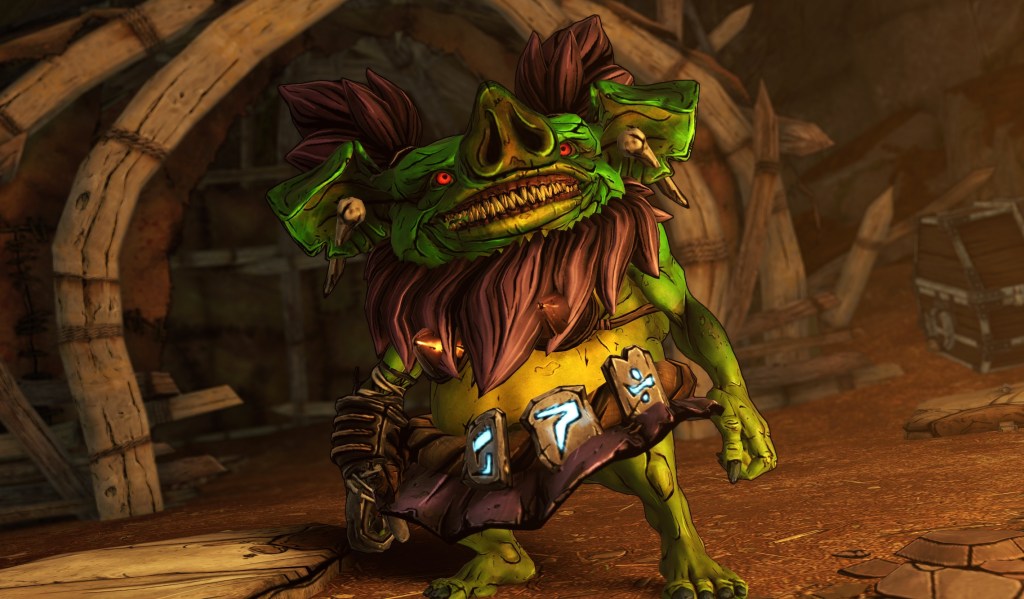 Tiny Tina’s Assault on Dragon Keep is the best part of the Borderlands franchise; a rare DLC chapter that surpassed all expectations and its original game. That it’s gotten a direct sequel, despite being a meta-narrative story set within an imaginary fantasy world, is an amazing achievement – and one that feels well-earned. In Tiny Tina’s Wonderlands, the magical story laid out in Borderlands 2 continues, complete with more dragons, more trolls and lots more goblins as Tiny Tina weaves a glittering new tale.

In a hands-on gameplay preview, GamesHub was able to get up close and personal with the denizens of Wonderlands, and kick some arse in the game’s wonderful worlds. With a fresh sense of whimsy, the return to the colourful, over-the-top fantasy of Assault on Dragon Keep feels most welcome.

As before, it’s grand and a bit silly, but still very, very endearing.

The preview began in Mount Craw, an early chapter of the game. The framing narrative and early story weren’t present, so there was no major context for the adventure – but the build did contain a hearty number of quests that helped illuminate the direction of the game.

Many of these starred Jar, a tiny goblin with big ideas for destroying goblin oppression.

Jar isn’t a fighter – but luckily, your main character is.

In Tiny Tina’s Wonderlands, you’ll be able to choose from six unique classes, and mix-and-match skills from each. In the preview build, only the Stabbomancer and Graveborn classes were present – but both differed enough to give a clear view of the options players will have.

The Graveborn is the gnarly goth of the group, and rocks two unique abilities: magic arrows, which can be fired endlessly, and a death blast stomp that clears whole swathes of enemies at once. This was particularly satisfying for group fights with multiple trolls, because it pushes enemies back and deals high damage.

In addition, The Graveborn also has a ‘Demi-Lich’ companion that provides additional firepower.

The Stabbomancer has a projectile attack that fires meteorites from the sky, and also has a ranged spinning blade special that sends a giant wheel into the air to constant whip down enemy health. This one was useful for dealing with dragons and other airborne enemies, and had the added benefit of allowing your player character to take cover while fighting.

The Graveborn felt the more effective of the two, given the class attacks are more hands-on and deliver higher damage, but a ranged approach also works extremely well in a pinch, and will help you stay alive with needing to use many of those pesky ‘second chance’ revivals.

No matter what class you choose, once you find a gun that feels good (from a selection of many), and master your special attacks, you’ll have no problem setting off on your grand adventure through dark caverns, deep mountains, and danger-filled goblin encampments.

The lands shown off in the early preview for Tiny Tina’s Wonderlands were gorgeous, and spanned from cel-shaded snow-capped mountains to underground, Hobbit-like goblin caverns filled with tents, odd structures, and mechanical beasts. Even the slim snippet in the preview was enough to show off the bright, pop colours of the journey, and how classic fantasy appears to inspire the tale.

Between high mountain cities, troll-infested towns and lava-filled pits, there’s plenty of iconic locations that wouldn’t look out of place in your next Dungeons & Dragons session. It’s a game that pays clear homage to the entire fantasy genre, from its mythical class warfare quests to the way you can level up your main character’s stats, just like in D&D.

It’s absolutely still a Borderlands game, but the addition of skill-based ‘hero points’, new fantasy-themed guns, magical attacks, and a refreshed, medieval-style UI are enough to make the franchise feel fresh all over again.

Goblins and trolls are a worthy replacement for the franchise’s Psychos, and it’s a relief to not have to face down countless swarms of Loader Bots in this adventure. Instead, you’ll have a whole new range of enemies to meet, including some rather ugly-faced goons.

The limited nature of the preview meant the deeper story behind Tiny Tina’s Wonderlands was only hinted at in ‘overworld’ dialogue shared between Tina and her companions, Valentine and Frette, so we certainly have more questions about the game and what exactly it’s about – but with a handful of hardy new character classes, and delightful new worlds, there was enough here for the preview to feel moreish.

The meta-narrative in Tiny Tina’s Wonderlands – that the game is controlled by the wild imagination of a young girl – is one that’s ripe with potential. So far, it appears Wonderlands is living up to that, with a story that seems just as weird, funny and intriguing as its predecessor. Tiny Tina’s Wonderlands has big boots to fill, but the early preview showed off a promising start.

Tiny Tina’s Wonderlands is set to launch for PlayStation 4, PlayStation 5, Xbox One, Xbox Series X/S and Windows PC on 25 March 2022.