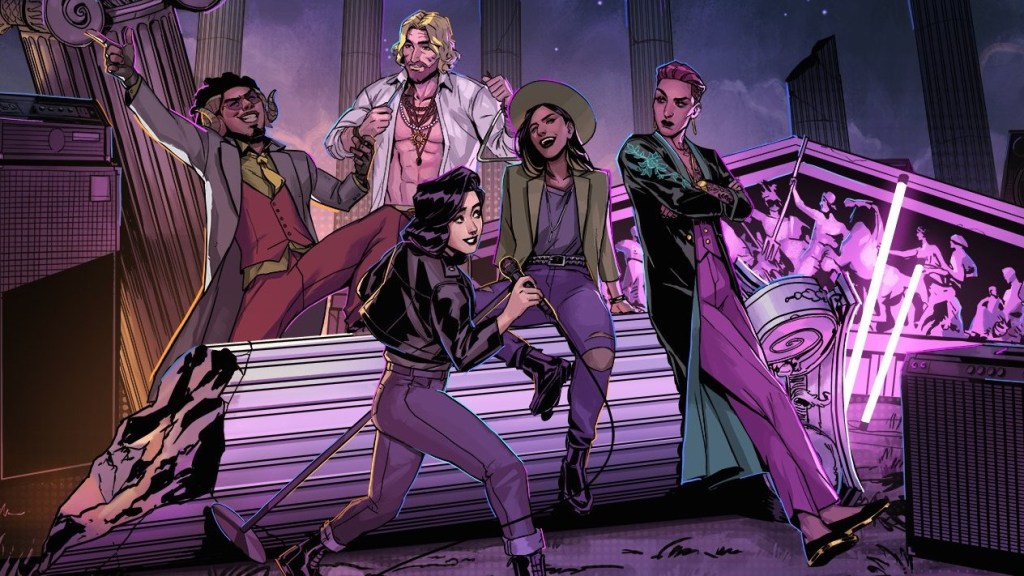 David Gaider has been thinking about Stray Gods for a long time.

The celebrated lead writer and world builder behind Bioware’s Dragon Age series has been quietly working on the project since 2019 with Summerfall Studios, but has been pondering the idea for much longer.

‘Even when I was at Bioware I wanted to do it. We had branching dialogue, but can we do branching *music*?’ Gaider tells me. ‘I was kinda half joking, but the more I talked about it the more people thought, ‘oh yeah, that’d be really cool’. It was always on my “list of things undone” that I wanted to try.’

PAX West 2022 is one of the first occasions where Stray Gods is being played by anybody outside of Summerfall’s walls. ‘The UI [user interface] is really rudimentary at this point. The songs are a mix of scratch and real vocals,’ Gaider says as he fires up the preview build. Despite all of this, he never seems anything less than both firmly confident and supremely proud of how his dream is coming together.

After playing this early snippet of the game for myself, I can absolutely see why. Stray Gods is enthralling.

The demo began with a choice to be made between three different traits for the player character of Grace, performed by Laura Bailey, each of which leans loosely into a different kind of musical archetype. ‘These inform some of the options you’ll have available,’ Gaider tells me. ‘You make choices during the songs, (and) it’s not just branching lyrics, it’s branching musical styles as well.’

In practice, this means that during both regular dialogue scenes as well as songs, players are presented with choices for their responses in much the same way as the dialogue wheels from Dragon Age or Mass Effect function. What’s truly amazing here is how smoothly the songs are able to transition their musical styling and emotional tone based on these choices. It’s enormously impressive, even in this largely unfinished state.

The construction of songs that are malleable yet cohesive presented a wholly unique challenge to Gaider and composer Austin Wintory, one they initially underestimated.

‘When I started off, I was thinking, “writing lyrics is just like writing dialogue, right? How easy can that be?”,’ Gaider confesses. ‘Not as easy as I thought.’

As luck would have it, Austin had previously worked with Melbourne-based musical comedy group Tripod, who enthusiastically signed on as co-lyricists to the project. A Twitter interaction regarding the game by Australian singer-songwriter Montaigne led to them also signing on to contribute lyrics to the project.

The early gameplay snippet of Stray Gods kicked off with a scene introducing the player to Grace and her band as they hold open auditions for new members. It’s not going particularly well, and Grace is a little anxious about it. As proceedings end and everyone leaves, she takes to the stage and begins to sing a wistful lamentation about her lack of direction in life, but is soon interrupted by a woman who introduces herself as the Greek god, Calliope. A charming exchange of dialogue occurs, and we’re thrown into the first of the games’ signature branching duets.

‘Music I think is a shortcut to emotions that you don’t normally have … you have hours and hours of gameplay to get someone to have a romance in a game like Dragon Age, but in the space of a song, you can summon so many more emotions and do so much more quickly,’ says Gaider.

The duet presented me with choices ranging from optimistic and encouraging, to negative and defensive, all of which felt as weightily characterful as the dialogue options in Gaider’s previous works.

At the end of the song, I was thrown into a scene a little further along which sets up the main thrust of the story. I won’t spoil it, but an event occurs that places Grace into a situation where she has one week to solve a mystery before the Chorus, represented by Greek gods Apollo, Athena, Persephone and Aphrodite, will execute her. Stray Gods opens up at this point, and the player can make choices as to where to go and who to speak to in more traditional adventure game fashion.

The musical heart of the game still remains front and center, even as the game expands. ‘The branching really starts at (this) point and the choices you make in song start coming back,’ Gaider tells me. ‘The idea is that the tune that you chose will then have callbacks later on in other songs, which ideally are not just any part of that song, it’s the one you specifically chose.’

‘You will start to hear the callbacks again and again until we get to the finale, which branches so much. It was the biggest challenge, because the finale draws from all the songs, and all the choices you’ve made, sorted into one gigantic last number that is basically all callbacks from the beginning of the game to the end.’

It’s a wildly ambitious idea, but the team appears to be taking the time to make it work. Much of the game’s cast is still tightly under wraps, and both Gaider and Summerfall co-founder Liam Esler repeatedly stressed to me throughout our session that much of what I was seeing and hearing was incomplete. ‘We’re still quite a way out,’ Esler smiles.

Despite how early the build of Stray Gods that I experienced was, it lingers as my absolute standout from the entirety of PAX West. I’ve gone back and listened to my audio recording of the preview session multiple times just to hear those gorgeous songs again, and I can’t help but feel that the game is going to be something very special indeed.

Stray Gods: The Roleplaying Musical is slated to release on PC and can be wishlisted on Steam.