The strangest unsolved mysteries and lore in Stardew Valley

Stardew Valley is an exceedingly wholesome game, until you look beneath the surface of its weird town.
Leah J. Williams 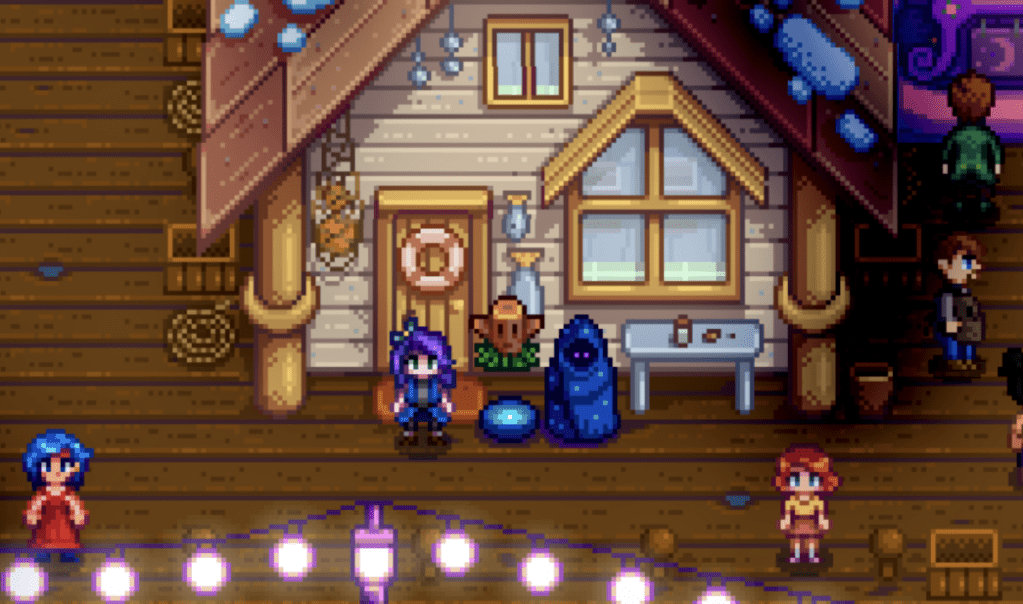 For the most part, Stardew Valley is a wholesome game about planting crops, farming, fishing and relaxing to your heart’s content. Over the last five years, it’s grown exponentially, with new features, mod support and frequent updates helping the game foster a thriving community. But the more players became immersed in the world of Stardew Valley, the more they began to notice that not everything was ‘normal’ in the game’s lonely town.

Beyond the simple life of a farmer, fans noticed weirdness creeping in at the edges. In a nearby town Mine, strange creatures made of shadow and slime thrived. Dwarves in dripping Caverns made references to an ancient war. Players found odd, haunted figures hiding beneath the ground, and ancient shacks filled with magic.

While Stardew Valley seemed quiet and wholesome at first, fans soon realised there was something much darker hiding in the town. These are the biggest mysteries in the game, spotted over the last five years.

Townie Abigail eats rocks, may not be human

Stardew Valley is populated by intriguing characters, and they all have their own stories. Abigail is one of the most beloved, thanks to her carefree nature, cute purple hair, and her relatively easy-to-please ways.

In the game, you can romance characters by giving them gifts on a regular basis. While there are some commonalities between characters, most have unique gifts they like, and ones that’ll boost your relationship instantly. For Abigail, one of her chosen gifts is amethyst, a gem you can find while mining in the Caverns.

The only problem is that instead of putting this amethyst on a mantlepiece or cabinet, Abigail will accept your gift by eating it. When you hand her any kind of rock, she’ll exclaim, ‘Hey, you’d you know I was hungry? This looks delicious!’ A moment later, the item will be gone from your inventory.

While fans agree this is a glitch where amethyst is somehow classed as food in your transaction, it’s also led to fan theories and speculation about whether Abigail is actually human.

There’s a fleshy alien on the loose in Stardew Valley

After your first year in Stardew Valley, you have the chance to obtain a mystery item called the Strange Capsule. This will appear on your farm in the middle of the night, and seem to contain something strange inside. When you click it, a message will pop up, reading: ‘There’s something fleshy bobbing around in the fluid.’

Three in-game days later, the capsule can be found smashed from the inside. The text describing this event says, ‘A strange sound was heard in the night…’

While you never properly glimpse what was inside the tube, the ‘fleshy’ alien can be seen in rare events as you wander the town at night, usually manifesting as a strange blur running across the screen.

The town is haunted by ancient, underground dolls

In Stardew Valley, you’ll eventually be tasked with mining up special items to add to the town museum. Most of these are fairly common items you’d find underground: rocks, dirt and gems. Others are ancient artefacts, revealing more about the history of the town.

Along your travels, you may also dig up a range of strange dolls, pictured above.

The dolls appear to be in pristine condition, but there’s no use for them other than being donated. How they ended up underground is a mystery — but they do appear quite frequently, and can be found all over Stardew Valley and in the town’s Mines.

In later stages of the game, one of the dolls also appears as a possessed object that attacks players (read on to find out more).

Whether they’re the ancient remnants of a past society, or something more sinister, is unclear.

The town’s Dwarves and Shadow People have been at war for 1,000 years

In an old Sewer in Stardew Valley, you’ll meet a Shadow Person named Krobus who seems shy and reserved. Separately, you’ll also meet a Dwarf (only referred to as Dwarf) in the Mines, who you can only understand after donating four Dwarvish scrolls to the Museum.

These two characters don’t appear to be related — but once you talk to both and enter the Sewer, you’ll unlock a special cutscene that reveals the two don’t get along because the Dwarves and Shadow People have been at war for 1,000 years, only recently ending their conflict.

While details aren’t shared, it appears both sides suffered severe losses, with both Krobus and Dwarf being forced underground by the defeat. It could very well be that Stardew Valley is built on the bones of this conflict — which would also explain the strange figures, texts, and items that can be dug up in the game.

Strange figurines hide in the dark corners of Stardew Valley

As you unlock new locations in Stardew Valley, you’ll occasionally find secret places in the game where mystery items are hiding. Some of these are innocuous — a knight statue, a Junimo creature statue, or a trophy. Others are very, very weird.

Check out the three statues in the middle of the bottom row: a hybrid turkey-robot, a lumpy dinosaur, and a strange alien with a heart antennae on its head.

No matter which way you discover them (via ancient books or stumbling across their locations), their strange appearance is never explained. Nobody ever mentions them. They’re just there. Watching. Waiting. Players have agonised over their existence for years, but it doesn’t appear we’re any closer to understanding what they are.

On certain occasions in Stardew Valley, players will hear odd noises while wandering the town at night. These include a slow, hollow croak and an echoing cry of a strange creature. While not always the case, these sounds can indicate your animals are being attacked and eaten by an unseen beast.

If that’s the case, your animals’ status will be set to ‘stressed’ the next day, indicating they’ve seen something they shouldn’t have in the night.

That said, we don’t really know what the sounds are, or where they’re coming from. You also can’t predict when they’ll happen. Understandably, hearing them on a random night as the sky darkens gets very, very spooky.

Players have also reported seeing ‘someone disappearing into the bushes‘ as the sounds begin (likely the Strange Capsule alien), indicating they may be tied to a deeper mystery, yet to be uncovered.

A strange monster makes rare visits to the town’s dockside

One of the rarest events in Stardew Valley allows players a glimpse into the unknown, as a creepy monster appears at dockside to ogle players and stare from a distance. The unnamed creature appears on rare occasions when the player chooses to fish at dockside, but you can’t fish it up.

It will pop its head out, bob on the water, and watch quietly. You can’t interact with it, and not much is known about the beast.

Some have assumed it’s a ‘merperson’, given that race makes an appearance in town festival, but it looks nothing like the other merpeople, and there are no real clues about what it is. While it’s likely just a fun easter egg, the mystery of the sea monster persists.

You can use magic to turn living children into doves

One of the strangest mechanics in Stardew Valley is the ability to ‘dismiss’ your children by bringing them to the Witch’s Hut and using the Dark Shrine of Selfishness and a Prismatic Shard to turn them into doves permanently. This sets them ‘free’ and rids you of your responsibilities as a parent.

But that’s not the worst part of using the shrine. See, when you choose to transform your children into doves, you also unlock the potential for two special (but horrible) events to occur in the game.

One of these occurs when you watch TV. If you’ve sacrificed children in the past, you have the potential of hearing the following message over the static in the TV: ‘You’ve brought this upon yourself… now I’m free… Hee hee hee!‘ On the screen you’ll see the image of an ancient doll, which will then pop out and be added to your inventory.

Later, an evil red version of the ancient doll will haunt the Shrine and attack players every time they enter the Witch’s Hut.

You also have the chance to unlock a telephone call, which arrives with the following text:

‘You place the receiver to your ear, and are met with a roiling, abrasive static. But wait… beneath it all, you can make out something else… an otherworldly voice… ‘Y-O-U H-A-V-E F-O-R-S-A-K-E-N U-S’

All in all, it’s a horrible bit of magic — and one of the strangest parts of Stardew Valley.

With Stardew Valley creator Eric Barone’s next game being all about a ‘haunted chocolate factory‘, expect the latest entry in the Stardew mythos to be just as strange, weird and wonderful as the original game.