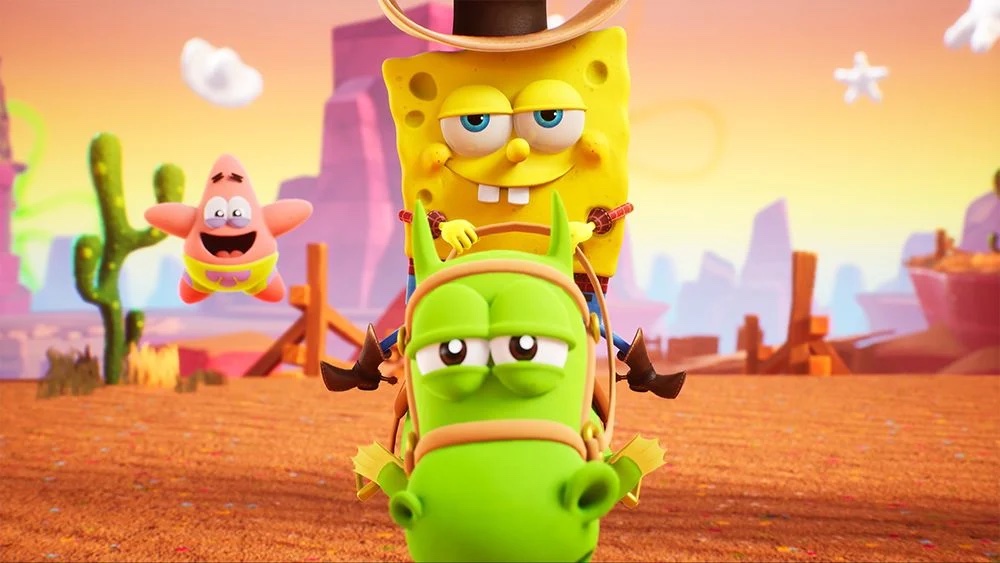 The longevity of the SpongeBob SquarePants franchise is frankly surprising. Years after its fellow Nickelodeon titles fell to the ravages of time, it continues – with frequent TV shows, movies, and video game tie-ins still being produced, more than 20 years later. It speaks to the fun of the franchise – the solid, all-ages humour, the delightful cast, and the colourful world of Bikini Bottom.

In 2020, the continued popularity of the long-running series led to the resurfacing of its classic video game platformer library. The popular Battle for Bikini Bottom got a big-budget remaster, subtitled Rehydrated, from Purple Lamp Studios – and SpongeBob fever was re-introduced to modern gaming audiences. Positive reception and an enthusiastic fanbase have now led to the arrival of The Cosmic Shake, a spiritual successor to Battle for Bikini Bottom.

During a recent PLAION games showcase, we were able to get hands-on with The Cosmic Shake – and it turns out, it’s much more than a spiritual successor. It’s basically a fully-fledged sequel to the classic SpongeBob platformers of old, complete with whimsical worlds to explore, and plenty of jump-spin-attack goodness.

In the snippet of Cosmic Shake gameplay on show, the titular SpongeBob finds himself in a candy-coloured coral forest seemingly themed after classic cowboy films. The demo provides little context for this otherworldly romp, but clues tell you that SpongeBob is no longer in the cloistered realms of Bikini Bottom. In fact, he might not even be in the same universe.

In this world, SpongeBob is a rootin’ tootin’ cowboy, Patrick is an adorable balloon, and Mr. Krabs is a gung-ho saloon proprietor who really, really needs some cactus goo – presumably to exploit in the name of capitalism. SpongeBob’s job is to meet every request from Mr. Krabs, which includes hunting for cactuses in a rocky undersea desert, and beating back gooey alien creatures defending these pits of slime.

If you’ve played Battle for Bikini Bottom, you know what to expect from this title. As in past games, it features SpongeBob armed with a bubble blower, a deadly spin attack, and a bouncy jump to help him reach high places. Controls are tight, sleek, and well-designed thanks to years of iteration and the talent of Purple Lamp (which also helmed the Bikini Bottom remaster with great aplomb).

As you traverse various mountains and hills, you’ll need to face off with increasingly more dangerous enemies, each with its own complex attack patterns.

The preview of The Cosmic Shake limited exploration to a small, set area – but this still included a range of boss fights against roving blob monsters, each with deadly spit patterns, wandering tentacles, and an army of minions. None were particularly difficult to beat, but that’s in the nature of SpongeBob SquarePants games.

While they certainly appeal to the nostalgia of adults, they also function well as an early, accessible introduction to the platforming genre.

As a kid, the SpongeBob SquarePants games were a pure delight. The next generation should get that joy, too – and The Cosmic Shake looks like it’ll deliver.

With a sharp theme and tight controls, it should also provide the depth of excitement that players have come to expect from the SpongeBob titles. While tie-in video games have developed a poor reputation, this franchise is a rare exception, and frequently delivers excellent, memorable, and joyful adventures.

Having players explore a multiverse in this romp also opens up a new world of potential. While multiverses are currently in vogue and saturating the market, the tongue-in-cheek approach here means the theme is still refreshing. SpongeBob approaches tasks with an effervescent and timeless sense of charm, buoyed by light-hearted dialogue that keeps the weird and wonderful action romping along.

The Cosmic Shake leaves an impression as a light-hearted, fun platformer with a small dose of challenge, but a much larger dose of heart. It’s not a particularly difficult game, but it doesn’t need to be. Regardless of your experience with the SpongeBob SquarePants franchise, it will wrap you up in a bright sense of nostalgia, and buoy you along its bouncy, carefree journey.