Splatoon 3 has finally locked in a release date for late 2022. Here's everything we know about the game.
Leah J. Williams 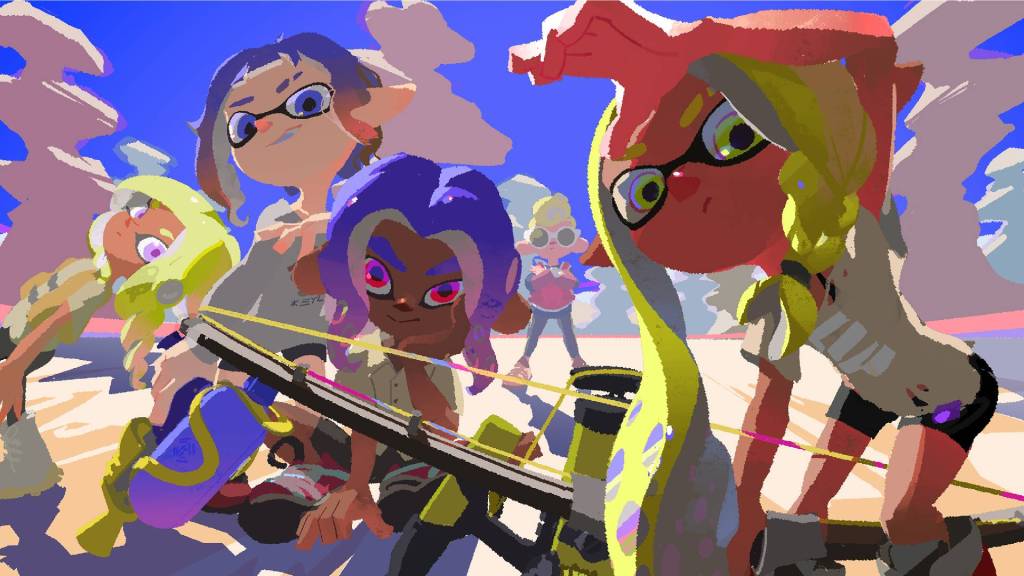 Splatoon 3, the long-awaited sequel to the beloved squid-shooter franchise, is just over the horizon. That means it’s time to spit-polish your shooters, rollers and sloshers, and get ready for some brand new, ink-filled action. This go around, there’s a brand new story, as well as fresh modes, maps, weapons and more.

Here’s everything you should know about Splatoon 3.

Read: Everything announced in the Splatoon 3 Nintendo Direct

Splatoon 3 is currently set to launch on 9 September 2022. It’ll be exclusive to the Nintendo Switch, and will offer story and multiplayer modes on release.

The first player test – known as the Splatfest World Premiere – has been set for 27 August 2022, so if you’re on the fence about the game, you’ll be able to jump in for free ahead of launch.

What’s the story in Splatoon 3?

Splatoon 3 will come packaged with a new story mode to accompany all the action of its typical multiplayer ink battle royale mode. This chapter, titled Return of the Mammalians, will feature the wily Agent 3 as they go up against packs of octopus creatures known as Octarians.

It appears the Octarians will be guarding a strange secret as players work to uncover ‘the secrets of Alterna’, and why it’s home to a substance known as Fuzzy Ooze. While glimpses at this story mode have been vague and surreal, it appears to take place in a modern cityscape (an oil rig is also featured in early trailers) and will require players to utilise classic Splatoon traversal and gunning to overcome environmental challenges.

This mode is completely separate from the main gameplay of Splatoon 3, which will look and feel quite similar to past entries – which focus on ‘Turf War’ battles where teams of opposing players must compete to cover the battlefield in the most ink using unique weapons.

Do you need to play every Splatoon game in order?

Splatoon has not traditionally leant into story-based gameplay – but the previous entry Splatoon 2 did include a downloadable single-player story known as Octo Expansion, which featured a number of characters from Splatoon lore – including Agent 3, the protagonist of Return of the Mammalians.

If you’re looking to follow the franchise’s loose plot, it’s a good idea to jump in with Octo Expansion first, but this chapter is relatively standalone and likely won’t be essential.

Splatoon 3 is likely set to be a major hit, and Nintendo will likely aim to make it as accessible as possible for everyone. To that end, it’s likely Return of the Mammalians will explain any necessary bits of lore to familiarise new players with the world of Splatoon.

You can start fresh, or you can jump into past games to get a taster for the new story.

So far, a number of new and returning game modes have been confirmed for Splatoon 3:

This special mode is a co-op multiplayer romp for up to four players, and will allow teams to work together to take down Boss Salmonid enemies (Slammin’ Lid, Big Shot and Cohozuna) with a range of weapons including the Splat Roller, Splattershot, Blaster, Splat Charger, Classic Squiffer, Crab Tank, Killer Wail 5.1 and Tri-Stringer.

Along the way, players will need to collect and deliver special orbs to their team’s basket, which will ultimately earn them points each round. From early trailers, it looks like this mode has been improved from Splatoon 2, and will allow more interaction between teammates to keep the action going.

It appears there’ll be a number of stages included in Salmon Run, like Sockeye Station. The mode will also feature a special monthly ‘Big Run‘ where players will take on more intense battles.

Return of the Mammalians

This is a story-based, third-person narrative adventure where players will pick up their weapons and go on a journey as Agent 3, who is tasked with investigating the appearance of Fuzzy Ooze.

These Ranked Battles will require players to complete special objectives, five times in a row. If they fail three of these challenges, they’ll immediately be knocked out.

Turf War is the name for classic Splatoon gameplay. When players participate in this mode, they’ll be facing each other in four vs. four team-based battles where they’ll utilise various weapons and their ‘squid’ forms to travel around massive areas and attempt to ‘ink’ the most space on a battlefield. This go around, there’ll be new movement controls, in the form of ‘squid surge’ boost up walls, and ‘squid roll’ twirls on the ground.

Clam Blitz is a Ranked Battle mode where players must pick up clams scattered throughout individual stages, and drop them into a goal near their opponent’s base. It plays out a little bit like Capture the Flag, although you can dunk multiple clams over the course of battle.

This is a Ranked Battle mode where two teams fight to control a single tower that travels through the stage along a set path. Players are required to ride the tower to their opponents ‘end’ marker, although it can change direction when control is lost.

This is a Ranked Battle mode where players must capture at least 70% of the battlefield, and maintain this control until the clock runs out. After five minutes, whoever is in control for the longest wins.

Twelve stages have been confirmed to appear in Splatoon 3, including some new maps, and some returning stages. You’ll be able to battle at the following locales when the game launches:

More will be added as post-release content, free for all players.

Splatoon 3 will include a special card-based mini-game

When you’re not fighting your fellow Squidlings in Splatoon 3, you’ll be able to spend time with Tableturf Battle, an all-new 1v1 card game that lets you deploy special collectible cards (earned in battle) in a Tetris-like tactical fight.

This game mode is completely optional, but will likely be a spot of fun for those who enjoy tabletop games, or anyone who needs a break from all that splatting.

Does Splatoon 3 have co-op multiplayer or splitscreen?

Splatoon 3 offers a number of different modes, including solo mode, online multiplayer and local multiplayer – but it does not include splitscreen functionality as far as we know.

Salmon Run Next Wave and Turf War modes both offer the opportunity to take part in team-based co-op battles, but as in past games, it appears every individual player will be required to have their own Nintendo Switch console, copy of Splatoon 3, and Nintendo Switch Online membership to participate.

So while you will be able to play the game with friends, you’ll unfortunately need multiple consoles to make it work for now. While Nintendo may have a splitscreen announcement awaiting in future, precedent makes this feels very unlikely for Splatoon 3.

Will Splatoon 3 have a season pass?

It appears Splatoon 3 will not have a traditional season pass, however new items, clothing, weapons, modes, and stages will be introduced for all players in the months following the game’s release.

In addition, the game will receive a major paid DLC content pack in future, although the contents of this are currently unknown. Past games in the franchise introduced whole new stories and adventures in paid DLC, and the future of Splatoon 3 could be just as exciting.

Splatoon 3 is currently set to launch exclusively for Nintendo Switch on 9 September 2022. Stay tuned for more news and updates as we get closer to release.