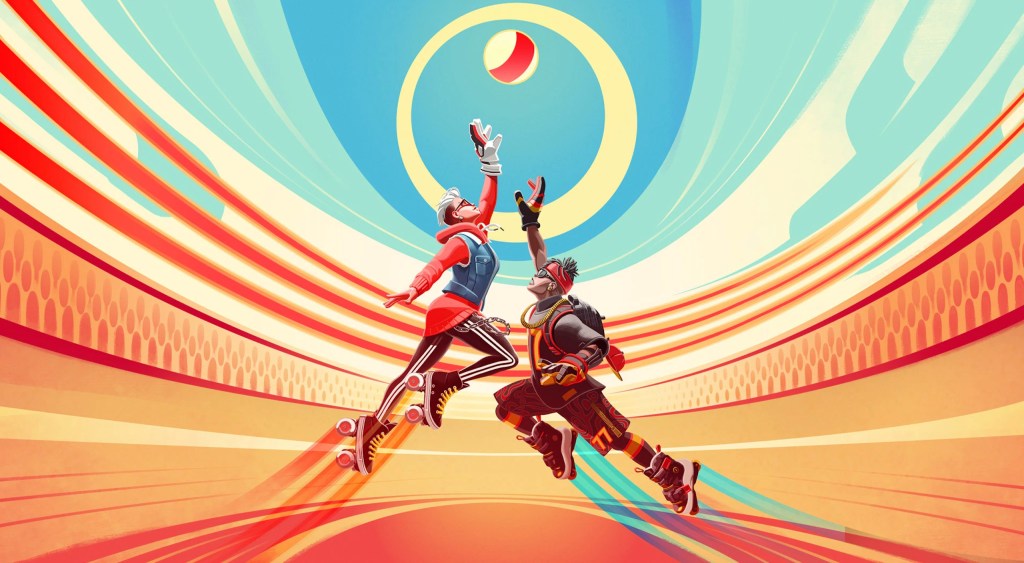 Roller Champions had a long path to launch, dotted by alphas and betas, plenty of player feedback, and a mounting sense of anticipation. It was never quite obvious what the game would become – but now that we’ve been able to dive in, the potential of this Ubisoft-developed online multiplayer romp, which combines basketball, pinball and high-speed roller derby, is incredibly clear.

From its fluid, skating movement to its stressful, tackle-heavy matches, Roller Champions has come roaring out of the gate with a distinct sense of personality and flair. Rather than being a straight adaptation of roller derby, as first appearances suggest, Roller Champions is actually something new – a hybrid sport designed with the aesthetics and movement of roller derby, the goal shooting of basketball, and the ping-pong bouncing of pinball.

Each element combines in a satisfying playstyle that allows players to experiment with movement around the game’s rink-style track, and work out the best team-based strategies in 3v3 matches to take down opposing team members, while protecting and guiding teammates to goal-shooting victory.

As Stéphane Drapeau, Product Manager of Roller Champions explained to GamesHub, designing the game by starting with a brand new sport was a rewarding challenge.

‘Roller Champions was really something completely new, completely fresh to work on because it was a challenge to create a sport from the ground up. It’s really about thinking of every element,’ Drapeau said. ‘Roller Champions is not a simulation sport – it’s a sport that got created from other sources, other influences and got mixed in that melting pot.’

‘It’s not only about creating the rules, creating what characters can do in the rink and how they can interact as teams and opponents, it’s also about the readability of the action.’

It was important to the development team to create something instantly recognisable – a spectacle that could be viewed without context, but with the understanding that gameplay required great skill and finesse to get right.

In that regard, Roller Champions hits the nail on the head. The gameplay, while simple to learn, contains an element of strategy that requires careful movement and earned mastery. Sure, it can be simplified to ‘roll, throw the ball through the hoop, avoid tackles’ – but with multiple ways to win and team battles that can surprisingly vicious, there are plenty of hearty tactics that can be deployed.

One loop around the roller rink track will allow you to score a single point, should you aim correctly and get the all-important ball through the basketball hoop placed at the end of the track. A second loop will earn you three points, and a third loop earns you five and a match win. But if your loops are broken by wily competitors, you’ll need to start over – amplifying the risk and reward of going for a three-point win.

To ramp up the realism and feeling of speed in the game, something that actively contributes to the freedom and flow of gameplay, developer Ubisoft Montreal worked with actual roller derby players for motion capture and smooth animations. Without them, Drapeau believes the game wouldn’t be nearly as exciting.

‘Almost all of the people that did the mo-cap work for the game are roller derby players,’ he explained. ‘They all know what they’re doing, and were very much instrumental to making the game happen because without them, we wouldn’t have the smooth animations that we have in the game.’

Surprisingly, pinball was also named as one of the key inspirations, with the game’s movement and attack abilities designed to be as visually appealing and frenetic as classic pinball gameplay. According to Drapeau, the spectator mode of the game allows this link to become clearer, as player’s gain a bird’s-eye view of the fast-paced, neon action.

Free-to-play was always part of the Roller Champions design

Like many other online multiplayer games in the market, Roller Champions is free-to-play, with the optional ability for players to purchase cosmetics or a ‘Roller Pass’ that contains multiple, season-based rewards. According to Drapeau, this structure was always planned for the game – even when it was first conceived in 2019.

‘From the very early pitches of Roller Champions, it was always pitched as a free-to-play game. It’s not an afterthought,’ he explained. ‘It’s really engrained into its DNA. It really comes back to the objective of the Roller Champions team – it was about being as approachable as possible.’

According to Drapeau, everything the team worked on, from the game’s colourful, artistic aesthetic to its multi-modes, was designed to be accessible and welcoming for everyone, without the need for a price barrier.

Read: How to play co-op games with your partner (without arguing)

While it certainly has a lot of competition in the free-to-play space, Drapeau believes the appeal of the game, and its difference from other free-to-play titles, is in its freshness, its lack of violence, and its inherent lightness.

‘For us, it was … a means to say, you know, this game is free to play. It’s light. Why don’t you just download and try it, and if it strikes your fancy – then, awesome.’

As expected, this means Roller Champions is littered with microtransactions – something game fans have become accustomed to over the last few years. As Drapeau made clear, there is no real imperative for players to spend cold, hard cash on in-game items. Everything included in the game is purely cosmetic, and won’t help you advance or progress further.

Instead, the game’s cosmetics will allow you to dress up your characters in funky, limited time outfits or colours that jazz up your appearance – if you wish. As Drapeau says, you can still lose the game, even looking as funky and fabulous as possible.

A similar principle applies to the game’s levelling up system.

While some competitive online games may have a skill curve that eventually alienates new players as ‘pros’ crowd the scene, levelling up in Roller Champions only means obtaining more fans and unlocking new stadiums. You don’t get skill boosts or greater tackling capabilities.

Everyone remains on the same level, making the playing field strictly equal.

‘Whether you win or lose [a] match, you will gain a certain amount of fans. So these fans will appear in the rink, and that’s what’s going to make you progress through bigger and bigger arenas,’ Drapeau explained. ‘There’s nothing that will impact your base skill level – you won’t gain strength, you won’t gain speed. It’s really about you progressing as an athlete.’

Without the pressure of competing with higher-levelled characters, this means new players can instead work on building strategy, working with their teammates, and uncovering the best ways to avoid those pesky tackles.

New modes and features are coming to Roller Champions in future

The plan for Roller Champions appears to be expansion via fresh game modes, mini-games and other content, with new Roller Pass seasons encouraging players to return to the game for surprises and ‘spicy’ gameplay shake-ups. According to Drapeau, the focus is still the core 3v3 gameplay mode – but there will be newer modes with different rules arriving in the game in future.

‘There are some curveballs, or at least some spice that we throw in there for each and every season,’ Drapeau said. ‘For kickoff season, we have 2v2 and ‘Hot Potato’ that will activate for a limited time during the season. We also have mini-games in the skatepark [base].’

Each iteration of the Roller Champions formula will have tweaks to keep the game interesting and engaging – with 2v2 being higher-staked, and ‘Hot Potato’ requiring players to be the last one holding a game ball amidst fierce competition.

Should Roller Champions find an audience in the hotly-contested free-to-play space, it certainly has the potential to develop a thriving playerbase as its content grows – whether by way of casual gamers, or in the esports scene. Hopes appear to be high for the Ubisoft-developed title, and this was reflected in GamesHub’s conversation with Drapeau – but only time will tell how much of an impact the game can make on the scene.

Roller Champions is a bright and shiny multiplayer sports game – one that spotlights sleek, addictive gameplay. There’s a lot to love about its unique mishmash of sports, and plenty of excitement waiting in future. While stiff competition may dampen its spirit, the game’s colourful and accessible appeal certainly shouldn’t be discounted.