OlliOlli World made me forget the world is awful right now 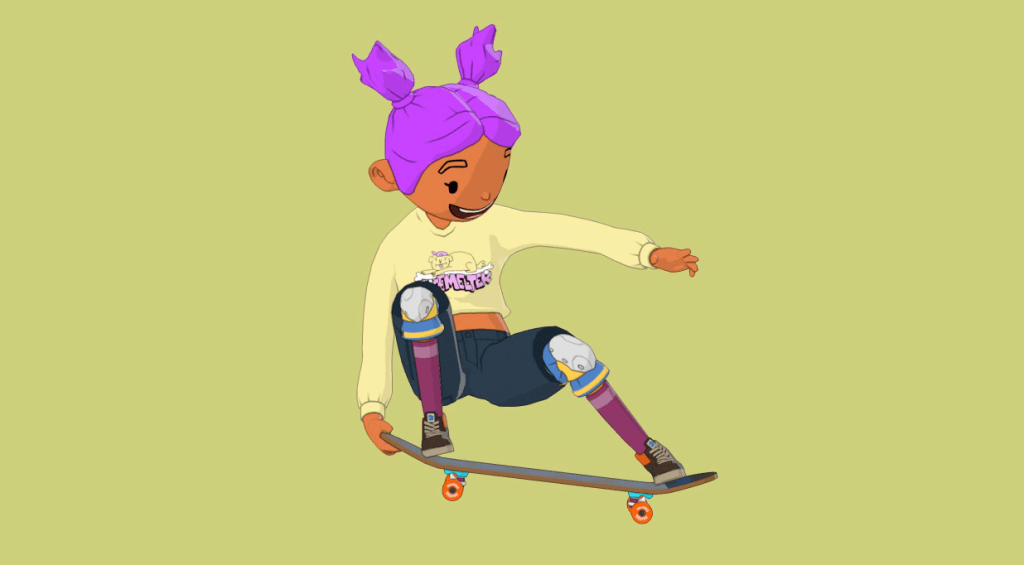 The night after I played a preview build of OlliOlli World, I was still skateboarding in my dreams. Grinding down pipes and rails, across signs held by bees. Coasting through a pastel lollipop playground collecting stars, meeting ice-cream-headed women, and speeding past idyllic blue oceans. I’m still thinking about walking away from this preview as I write it, abandoning my job and my commitments, to dive back into the game’s soft, beautiful world.

While many skateboarding games strive for a realistic depiction of the sport, no matter how unrealistic their mechanics might be – OlliOlli World takes more inspiration from Pendleton Ward’s whimsical art style, popularised in Adventure Time.

Beaches are painted in aqua blues, the sky is a pale shade, and each skateboarding course is scattered with wide-eyed creatures to befriend (or scatter) in your quest. It feels like a childhood dream, with calming hues and a real, sparkling charm that makes you glad to live briefly in its world.

OlliOlli World‘s Radlandia is a realm filled with miniature skateboard courses, each more difficult than the last. But while it’s certainly challenging, failure is never punished. The game rewards you for trying and trying again, with easy restarts and checkpoints helping you conquer each course and pull off the right tricks.

It means anyone can jump into the game and enjoy themselves, even as grinding pipes and tougher beaches hit the scene. With enough skill (and perhaps some luck), any challenge can be conquered.

The premise here is simple: you’re in line to be the next ‘Skate Wizard’ of Radlandia, a world governed by its dedication to skateboarding and being ‘rad’. If you watched Rocket Power as a child, it’s the same vibe here: you join a bunch of kids who love skateboarding, and set out on rad skateboarding-themed quests.

The overworld is laid out in biome-based levels, with each being themed to a certain locale: the ocean, the forest, a desert. In one level, you might encounter giant frogs in a slimy rainforest. In another, you’ll see starfish lying on ice cream beaches while a rubber ducky watches on.

Each level operates on rails; your job is to avoid obstacles, score major points, and complete a number of optional goals while honing your craft.

Along the way, each locale will teach you new tricks: grinding first, then ‘wall riding’, in addition to a number of special moves that’ll be familiar to skateboarding fans: ollies and heelflips, the no comply and beyond. While the notion may seem daunting, OlliOlli World is very good at easing new players in through a number of tutorials that show off the game’s chill vibes.

After early teething problems – namely, learning to let go of the trick button and relax – I found myself completely enamoured by the game’s intricacies. Beyond OlliOlli World‘s aesthetics, which truly are immaculate, the gameplay itself is a real draw.

To perform tricks (on console), players must ‘flick’ their controller in a particular direction, while constantly gaining speed via grinding (a constant upward push), pushing (using ‘X’ on PS4/5) or wall riding (a downward push). Enough speed means you’ll be able to clear objects in your path easily. Too much speed means you’ll trip and fall. The perfect balance is needed to reach every finish line.

It’s tough to get right at first, because no input can sometimes be the right move – even if it feels counterintuitive. Skating here is more of a puzzle, where players need to determine which paths to take, how much force to use, and how many tricks they can pull off before they hit the ground.

Risk is often a reward, and more dangerous paths can unlock higher scores, but mastery is required to really make the game’s high speed action sing. This takes time, but it’s time well spent. Even when it’s frustrating, the game is pure magic.

Until you ‘get’ OlliOlli World‘s gameplay, you may find yourself failing a lot. There’s a wonderful animation where your player hits a boardwalk square-on, and their limbs go floppy and limp as they fly through the air, Skyrim-style. I must have seen this a dozen times in a single level. Hitting the deck produces a similar outcome: flailing limbs and a slow, dramatic fall. But it’s so funny to watch. It means even when you do run into trouble, the game remains a delight.

Its sense of fun and whimsy is so clear in its character design, in its world-building, and in its gameplay. While it largely adheres to familiar skateboarding game tropes, it also encourages experimentation and trying again.

The hearty gameplay preview I was given made me fall completely in love, even though I’ve bounced off so many skateboarding games in the past. The sense of challenge is perfect. The art style is incredibly twee. Levels go by in a breeze, and gameplay absolutely soars once you get the hang of it.

It’s easy to forget your troubles in Radlandia. To forget the world is just a tiny bit awful right now. In OlliOlli World, skateboarding is the only thing that truly matters – and the longer you spend in the game’s world, the more you’ll start to believe that’s true.

OlliOlli World launches for PlayStation 4, PlayStation 5, Xbox One, Xbox Series X/S, PC and Nintendo Switch on 8 February 2022. A demo version of the game on PlayStation 5 was provided for the purpose of this preview.