Fishing doesn’t add much to Skyrim, but it hardly matters

Skyrim's latest iteration adds some new fishing spots, and not much else.
Leah J. Williams 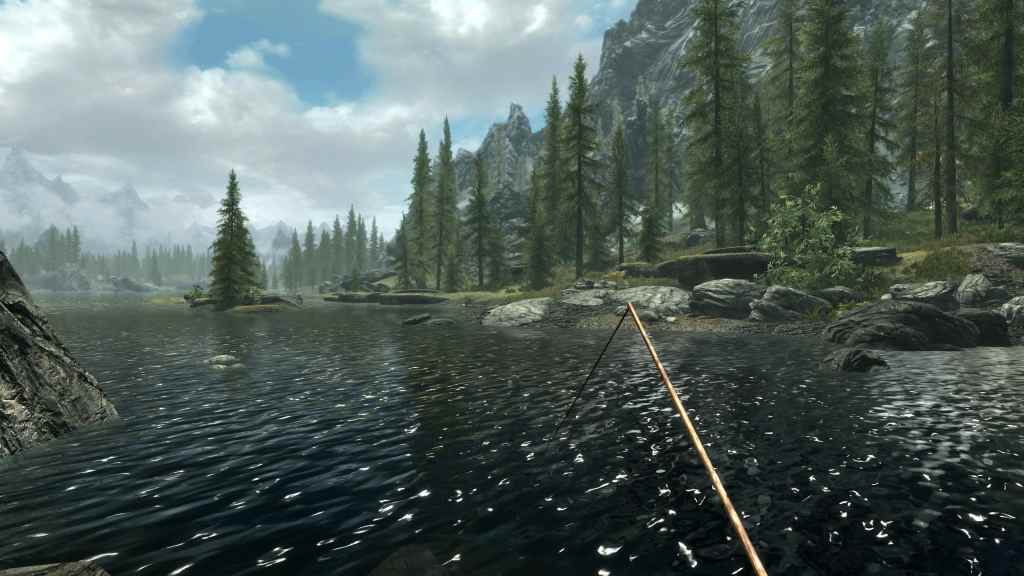 A wise person once asked Todd Howard, Bethesda Game Director and Executive Producer, why the company kept re-releasing Skyrim. The answer was simple: Bethesda would stop re-releasing Skyrim when people stopped buying it. Well, it seems they never did — because ten years on from the game’s original release, Skyrim Anniversary Edition is here.

This time around, the game is looking a little bit different. The last re-release, Special Edition, polished up textures, brightened skies, and made the game a tad prettier. Skyrim Anniversary Edition does similar, updating the game’s aged graphics for a ‘next gen’ audience on PlayStation 5, Xbox Series X/S and other consoles.

It also adds in a surprising new feature: fishing.

In a world ruled by dragon fire, warrior cults and giants, what does fishing add? Well, not a whole lot — but it hardly matters, because there’s already an overwhelming amount of things to do in Skyrim. Fishing is just a thin layer of icing over a very fattening cake.

Still, if you ever need a moment between wild quests and being the literal saviour of the world, fishing does provide a nice break from the general hubbub of war. All you need to do is pick up a fishing pole, sit by a river, and watch as the world passes you by.

Rather than being a simple addition to the game, fishing actually comes with some fresh new quests in Skyrim Anniversary Edition.

You’ll first unlock the ability to fish as you journey out of the game’s introductory cave and into the wide open world. By a nearby river, a fisherwoman will let you borrow her rod and introduce you to relaxing new mechanic. She’ll also point you towards the Riften Fishery, a new location housing several fishing-related quests.

If the Stones of Barenziah are too overwhelming to collect, or you really don’t want to kick off the game’s main quest in Whiterun, you can skip that altogether and head off on your new directive: to find and catch as many fish as possible. The more you catch, the more your skill will improve — and at higher levels, you can catch rarer fish.

At the behest of fisherman Swims-In-Deep-Water, you’ll be tasked with catching particular fish species, and cleaning the waterways of rubbish. Some fish are hard to find, but you’ll find everything you need in new fishing books scattered around Skyrim.

Once you have your new quests, it’s just a matter of finding bait by the game’s rivers and settling down for a quiet moment.

The fishing mechanic in Skyrim Anniversary Edition isn’t particularly unique. You cast your line, wait for a large buzz (felt in your controller), and pull your line in. Sometimes you catch fish, other times you catch rubbish or rare weapons. When you’re not waiting for that familiar buzz from your controller, you’re watching the waves lap at the shore, and the clouds turning overhead.

And that’s all it needs to be.

Adding fishing to a ten-year-old game isn’t particularly revolutionary. It’s certainly not a reason to fork out for Skyrim again — but regardless, the Skyrim Anniversary Edition is a great little package, whether you’ve played the game before or not.

There’s a reason the game is as popular now as it’s ever been — and while I’ll admit I was skeptical about yet another re-release, it only took a few minutes to remember why Skyrim has stuck around so long.

Around every corner of the game is a hidden secret. You walk through the lands, and pick up quests with every conversation. You can explore anywhere. Meet anyone. Discover hidden guilds and quests hiding in dark alleys and dense caves.

Everything has a purpose, and there’s always new lands over the horizon.

No matter how many times you’ve played the game, it somehow always feels fresh. No two playthroughs are the same, even if they operate within the same main quest bounds. Fishing adds another layer to this, even if the change is minuscule.

There’s always something to do in Skyrim. It’s huge, and ambitious, and even more beautiful in Skyrim Anniversary Edition. While the new collection, like its fishing mechanic, feels unnecessary, it’s not unjustifiable. In fact, it’s a welcome reminder of how fun and entertaining Skyrim can be.

Should you fork out an extra $30 for fishing and a handful of extras? If you already have Special Edition, probably not. The game is just as good there. But if you’re looking for a nice break from war and strife, fishing does serve as a nice break from the main action of the game — and Skyrim really does look much prettier with crisp ‘next gen’ graphics if you can’t play it on a PC.

Whether that’s enough to justify the price of the upgrade is up to you.